In the Japanese blood guilty 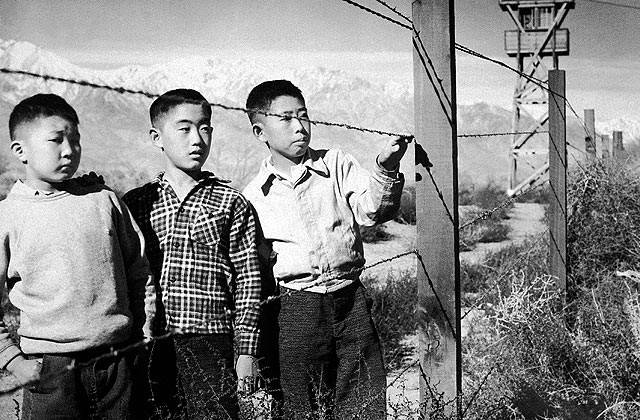 During the Second World War, the US government placed almost all Japanese Americans in camps - 110 thousands of people
US President Franklin Roosevelt 19 February 1942 of the year signed an Emergency Ordinance No. 9066, which empowered the Department of Defense to intern from the west coast inland to all Japanese. About 110 thousands of people were placed in the camps, the last of which was allowed to return home only in March 1946. In the United States, disputes are still ongoing as to whether such a move was justified by the government. Although the state expressed its point of view on deportation as far back as 1980, recognizing it as a “big mistake” and paying monetary compensation to all the internees.

In December 1941, Japan attacked the American naval base in Hawaii, Pearl Harbor. Thus began the war between the two powers. From its first days, the military department raised the question of the imprisonment of all Japanese people living in Hawaii before the US president. The military had reasons for such a step. In the first week after the attack on Pearl Harbor, they found out: the raid on the base was coordinated by Japanese spies belonging to the local immigrant diaspora. The saboteurs made a detailed map of the piers at which the American military vessels moored - this helped the Japanese aviation hit almost all targets.

The President of the United States pondered for almost two months. On the one hand, there was a large diaspora of the enemy in the United States — the Japanese, whose loyalty was in doubt. On the other hand, America, even during the war years, wanted to remain a democratic country. To resolve the dilemma of Roosevelt helped the old document - the Law on hostile aliens. He was accepted back in the 1798 year, in the presidency of John Adams, when America waged an undeclared naval war with France. By the way, this law remains in force to this day, which, if desired, the executive branch allows today to isolate any person on suspicion in connection with a hostile state. 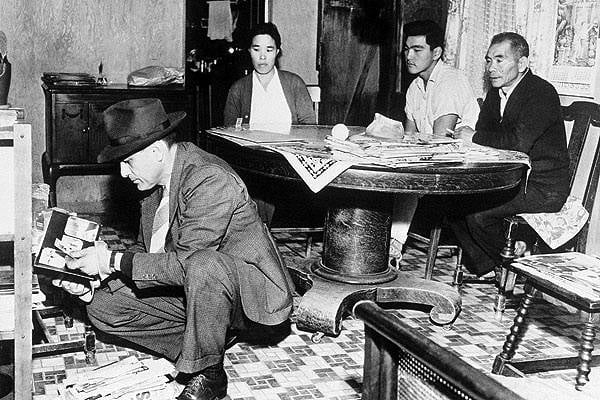 An FBI officer searches the home of a Japanese family. Photo: AP

Under the Decree number 9066 120,2 got thousands of Japanese who lived in the three western states of the United States - California, Oregon and Washington. Of these, 68% were US citizens, the rest legally were in the country, children under the age of 16 were 48%. In order to be considered Japanese, it was enough to have 1 / 16 of the blood of this nation.

In 1944, the US Supreme Court affirmed the constitutionality of internment, arguing that a restriction of the civil rights of a racial group is permissible if that is "required by public necessity."

Approximately 10 of thousands of Japanese were able to prove their usefulness to the warring America - mostly engineers and skilled workers. They were not placed in the camp, but also received the status of "suspicious person."

The remaining 110 of thousands of Japanese were sent to ten camps in the inner states of the United States — Wyoming, Arkansas, Kansas, and others. The military gave them two days to collect them — during which time they had to manage to sell real and personal property. In practice, this led to the fact that the overwhelming number of Japanese simply abandoned their homes with all belongings, as well as cars. On the first day after the decree was announced, ordinary Americans took it as permission to pogrom the "enemy", three Japanese were killed, about a dozen shops were looted. However, in the first hours the army and the police prevented the pogrom. 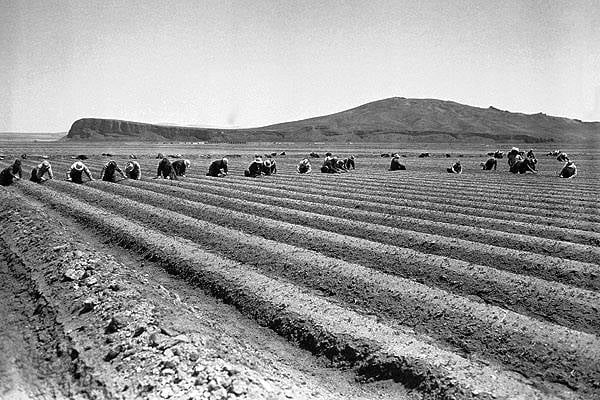 In general, the Americans perceived with great enthusiasm news about the deportation of the Japanese. Residents of three Pacific states showed special joy, from which, in fact, they took out “enemies of the people” to the camps - the Japanese were mainly engaged in petty trade and crafts, and with the closure of their business, competition in the market decreased.

21 March 1942 of the American Japanese 82 were brought to Manzaner, the first of the internment camps built in Owens Valley, California. It contained more 10 thousand people. The Tuule Lake camp in California itself was considered the most “terrible”; the persons who had the greatest distrust of the military — members of hunting clubs, radio operators, pilots, and sailors — were placed in it. The difference between the two types of camps - the usual and with a special regime - was small. So, in the first one, 48 cents per day were allocated for food per person, in the second - 40 cents. In the first, there were more grocery programs, and labor was given two additional days off per month.

In the camps, all adults were required to work 40 hours per week. Basically, the Japanese were engaged in agricultural work and crafts. In each camp there were a cinema, hospital, school, kindergarten, House of Culture - in general, a typical set of social and cultural life for a small town.

As the campers later recalled, the administration treated them in most cases normally. There were incidents - several Japanese were killed while trying to escape (American historians call the numbers from 7 to 12 people for the duration of the camps). Violators of the order could be put on a guardhouse for several days.

But the majority of the deported Japanese reacted with understanding to their fate. Moreover, quite a significant part of them, through hard work, tried to prove loyalty to the American government. As a result, two years later, in the middle of 1944, about 110 thousands of Japanese were released from 20 thousand people from camps (one third of all adults). True, until the end of the war, they were forbidden to settle in all coastal cities of America. The camp administration gave 25 dollars and money to the person who had freed himself up to the place of residence that the camper had chosen in advance. 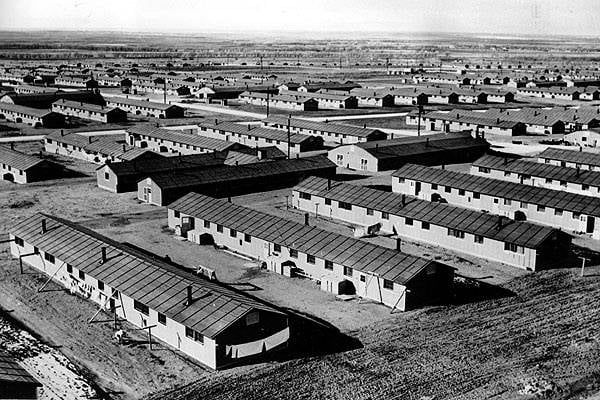 A small part of the Japanese - the Americans in the second generation - the government generally allowed to join the army. In June, a military unit was formed from thousands of Japanese 1942 (1,3 Infantry Battalion) in Hawaii in June. Until July, 100, the battalion was held in Wisconsin, and then sent to North Africa, from where the US Army began a throw to the south of Europe.

With the end of the war in September 1945, the Japanese were liberated from the camps, the last inmates left their 20 March 1946.

In 1948, the interned Japanese were paid partial compensation for the loss of property (from 20 to 40% of property value). Decree number 9066 was canceled by President Ford only in 1976 year. The War Resettlement and Internment Commission for Civilians, established in 1980, conducted an investigation into the persecution practices of American Japanese in 1942 — 1946. In 1983, she published the results of the study, concluding that "the deprivation of liberty of Japanese Americans was not justified by military necessity, but based on racial prejudice, military hysteria and the failure of political leadership." In 1988, President Ronald Reagan signed a document that on behalf of the US government apologized for the internment of the Japanese (as well as the Germans and Italians). Each of the deportees who had been deported was entitled 20 thousand dollars of compensation. In 1992, the Bush administration added 7 thousands of dollars each to this amount.

Compared to how people of the same nationality as the enemy were doing at that time, the US authorities treated the Japanese humanely. For example, in neighboring Canada, another fate awaited the Japanese, Germans, Italians, Koreans and Hungarians.

In the Canadian town of Hastings Park, under the Decree of February 24 of 1942, a temporary detention center was established - essentially the same concentration camp to which 1942 of thousands of people of Japanese origin were forcibly displaced to November 12. They were given 20 cents a day for food (2 — 2,5 is less than the Japanese camp in the US). More 945 Japanese were sent to forced-labor labor camps, 3991 people - to sugar beet plantations, 1661 Japanese - to settlement colonies (mainly in the taiga, where they were chopping wood), 699 people were interned to prison camps in Ontario , 42 people are repatriated to Japan, 111 are imprisoned in a prison in Vancouver. In total, they died during an attempt to escape, from diseases and ill-treatment around 350 Japanese (2,5% of the total number of Japanese affected by rights - the mortality rate was similar to that in Stalin’s camps during non-military times).

22 September 1988 Prime Minister Brian Mulroney also apologized to the Japanese, Germans, and so on, who were deported during the war. All of them were entitled to compensation for suffering in 21 one thousand Canadian dollars per person.

Ctrl Enter
Noticed oshЫbku Highlight text and press. Ctrl + Enter
We are
America vs England. Part of 20. Offer you can not refusePearl Harbor Attack
Military Reviewin Yandex News
Military Reviewin Google News
8 comments
Information
Dear reader, to leave comments on the publication, you must sign in.