Nuclear facilities in the era of the "national revolution", or who takes the machine from Sashko Bilogo? 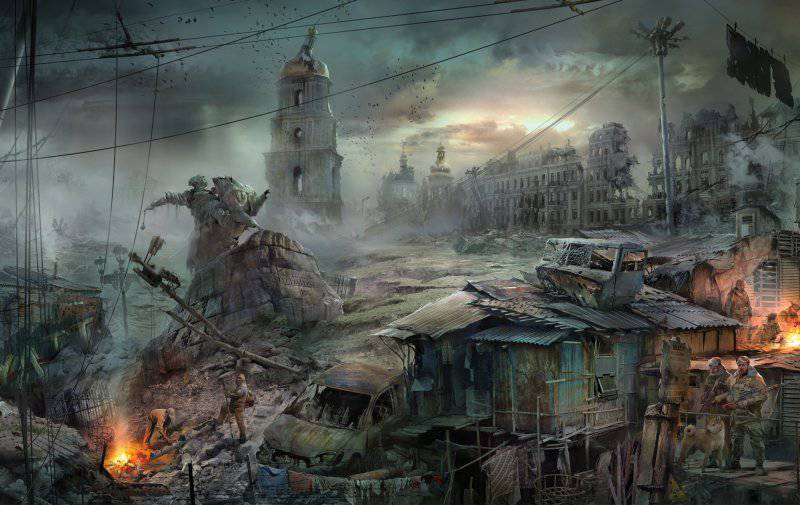 The victory of the “national revolution” in Kiev and the destabilization of the country caused by this makes it necessary to evaluate new global threats. Currently, four nuclear power plants in Ukraine have 15 atomic units:

It should be borne in mind that modern technologies can act as a special form. weapons mass destruction (WMD). A dangerous radiation situation can arise, for example, as a result of the destruction of a nuclear power plant by “conventional means of destruction” or by organizing a reactive accident through a terrorist act with the core warming up and “thermal acceleration” of the reactor. This can lead to both a nuclear explosion and a “normal” explosion, when the temperature of the molten uranium dioxide zone may increase so much that it melts (collapses) the bottom of the reactor shell, the concrete structure of the containment shell will be broken and the melted radioactive materials will fall into the ground . If these masses encounter groundwater on their way, they will explode and the explosion products containing radioactive debris will fall back up into the reactor building with all the ensuing consequences.

One of the potential dangers may be the transition to American fuel for Ukrainian NPPs, which will immediately cause emergency shutdowns of reactors. As you know, in 2010, the South-Ukrainian NPP switched to the use of Westinghouse American fuel in the second and third power units. In the process of using this fuel at nuclear power plants, problems in operation, frequent repairs and shutdowns of reactors repeatedly arose. In this regard, a petition was prepared from the station workers to the regulating company Energoatom and President of Ukraine Viktor Yanukovych, as well as to a number of ministries. In response, Mikhail Gashev, the chief state inspector for nuclear and radiation safety of Ukraine, assured that the American Westinghouse fuel would be replaced by Russian fuel, which was done at the end of 2012 both at the South Ukrainian NPP and at the Zaporizhzhya NPP. And how much money Ukraine plans to buy TVELs in the future?

Let us ask ourselves a question: what can prevent the capture of the same Rovno nuclear power plant by Bandera ?! Special Forces of the Ministry of Internal Affairs "Berkut" (the only force capable of preventing the terrorist seizure of dangerous objects) is dispersed. The place of "Berkut" in the Ministry of Internal Affairs was taken by the Bandera attack aircraft. Their typical representative Sashko Bilyi, a former security guard of Dzhokhar Dudayev, has already become famous for new methods of controlling the Rivne region with the help of a machine gun.

Under certain circumstances, one of the tasks of nationalist armed formations in Ukraine may be the seizure of nuclear power plants (for example, the same Rovno nuclear power plant) and nuclear disposal sites. Who in this case will take AKMS from the new “owner” of the Rivne region, Sashko Bilogo ?!

Having established their control over nuclear facilities, the Nazis will be able to demand and obtain positions in the leadership of the security agencies of Ukraine, primarily in the Ministry of Defense and the Security Service of Ukraine, with the help of nuclear blackmail.

There is a high probability of an accident simply because of absolute incompetence and lack of special knowledge and necessary qualifications among the militants. However, they may well be used "in the dark" to shift the responsibility for nuclear contamination of the territory and the death of thousands of Ukrainian citizens on the shoulders of illiterate, but fanatical extremists.

An emergency situation at one or several Ukrainian NPPs can be created by agents of Western special services who are introduced into the ranks of the militants.

Of particular concern are Ukrainian nuclear repositories - repositories of spent nuclear fuel. The most famous of them, and perhaps the most problematic, is located in Dneprodzerzhinsk, where the Pridneprovsk chemical plant is located.

Help.
The Dnieper Chemical Plant (PCP) is the first uranium processing plant in the USSR. The area of ​​the industrial site - 250 thousand square meters. Today, 22 enterprises operate here, seven of which are privately owned. There are 9 radioactive waste storage facilities in the city, in the industrial zone and beyond. According to official data, the mass of the contents of these storages is about 42 million tons of total activity 75 thousand curie.

Dneprodzerzhinsk chemical plant appears to be the most likely target for large-scale nuclear terrorism. The situation is complicated by the fact that there is no security at PCP, its territory is practically not fenced. In recent years, factory guards have prevented several attempts to remove radioactive materials. In the event that militants seize PCPs, it will not be difficult to steal nuclear waste and get into their own hands “doomsday weapons”.

The Russian side must be prepared to deal with the consequences of a possible nuclear catastrophe in Ukraine, threatening with radioactive contamination, including adjacent Russian regions.

Russian experts also fear that the new Ukrainian authorities in Kiev will resume the export of nuclear waste to the borders of Russia, which was practiced during Yushchenko’s time. As Ukrainian media reported, one of the secret promises that Kiev made to its partners in the West at one time was that Ukraine was ready to accept waste nuclear and chemical waste from Western countries. Then, however, Yushchenko did not have money for modern burial grounds, but, as is known, obligations must be fulfilled. Moreover, for this the West Ukraine pays extra. The solution was found quickly: but let's dump the radioactive and toxic rubbish at the very side of Russia. There, near the Russian border, in the Donetsk and Lugansk regions, is full of abandoned mines.

In the Donetsk region, according to some sources, for the poisonous landfill, a quarry in the village of Novoamvrosievskoye and a mine in the village of Snezhnoye, which belonged to Doncement, have been chosen. In the Luhansk region geography was even wider. Nuclear waste was buried in the Dolzhanskaya mine, near the village of Sverdlovsk. Chemical slags were poured in Komsomolskaya and Central near the city of Anthracite, as well as Yanovskaya-3 and Shterovskaya under the Red Ray.

In the light of the above, experts consider it expedient for the Russian side to take the following steps as soon as possible:

1. At the international level (the UN Security Council, the OSCE, the European Union, etc.) to resolutely raise the issue of ensuring nuclear safety in Ukraine in the light of the collapse of the country's internal security institutions.

2. Recall the Soviet practice (as was done in relation to the plans for the deployment of American RSD and neutron weapons in Europe) and turn directly to the peoples of Europe, bringing to them the whole danger of the situation in Ukraine and explaining that it can touch everyone!

3. To organize on the Russian-Ukrainian border a system of permanent monitoring of the transfer of nuclear materials.

4. To ensure full readiness of the Armed Forces of Russia to conduct counter-terrorist operations in the event of a threat of the seizure of dangerous nuclear facilities. Adopt the relevant law.

5. Prior to the establishment of solid power in Ukraine and the disarmament of Bandera, help healthy public forces to create and equip rapid response teams (for example, “automobile anti-Maidan”) to ensure counter-terrorism activities regarding objects of increased man-made danger

Ctrl Enter
Noticed oshЫbku Highlight text and press. Ctrl + Enter
We are
What we lostMilitary reform as an integral part of the security concept of the Russian Federation: Systematic dynamic assessment
Military Reviewin Yandex News
Military Reviewin Google News
163 comments
Information
Dear reader, to leave comments on the publication, you must sign in.