Vladimir Konstantinov: We will raise the issue of changing the autonomous status of Crimea to the state

March 2 2014
369
Sevastopol can receive a special status in the Autonomous Republic of Crimea after the expansion of its powers. This was stated by the speaker of the Supreme Council of Crimea, Vladimir Konstantinov. Now Sevastopol is a city of state importance in Ukraine. 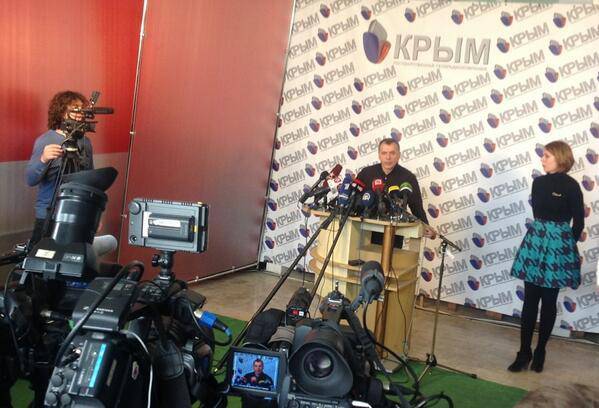 Konstantinov stressed that the decision will be taken by the people of Sevastopol themselves.

“It will be their decision. As it will be perceived in the Crimea, I can assume: the residents of Sevastopol are our friends, ”RIA quotes Konstantinov. News.

Konstantinov also said that the March 30 referendum will raise the issue of changing the status of the Crimea.

“We will raise the issue of changing the autonomous status of Crimea to the state. And on this basis we plan to build relations with the central government on a contractual basis, ”said the Chairman of the Supreme Council of Crimea, Vladimir Konstantinov, at a press conference in Simferopol, Interfax reports.

According to Konstantinov, a working group representing the Crimean authorities is in Moscow, where he is negotiating various aspects of helping the Russian Federation to the peninsula.

“As for help, we appealed to the Russian Federation to ensure law and order, provide us with financial assistance for this difficult period. Such consent is obtained. Now the working group is already in Moscow and is already resolving the technical issues of this problem, ”Interfax quotes him as saying.

The speaker advised Kiev not to try to use force in order to gain control over the Crimea, or some other region resisting this. He noted that such a move would end with the fact that the new authorities would lose the region within Ukraine.

The Supreme Council of Crimea is well aware of the concern of the Crimean Tatar population of the peninsula and is ready to offer its representatives broad powers, said Vladimir Konstantinov.

“We are ready to offer the Crimean Tatars those powers which they never had (before),” ITAR-TASS quotes him.

“No threats today exist neither for the authorities of Crimea, nor for the residents of the autonomous republic. I am authorized to state this. Today we make decisions that completely legalize all power in the republic, ”said Konstantinov.

According to the chairman of the Supreme Council, leaders have been appointed in all the power structures of the Crimea.

“They have been tasked by the Prime Minister to stabilize the situation, reassure citizens, convince all people that there is power in Crimea, and it is authoritative,” he stressed.

The deputy majority in the Crimean parliament will be formed on Sunday before the end of the day, Vladimir Konstantinov said.

“Today at the inter-factional meeting we received agreement and began to form an interfractional majority with the name“ We are Crimeans ”. At the moment this work is underway, and it will be completed by the end of the day, ”the speaker said.

According to him, the parliamentary majority will include more than two thirds of the Crimean parliamentarians.

In addition, Konstantinov said that the decision of the Federation Council to allow the use of Russian troops in the Crimea is a reaction to the actions of the "Nazi gang."

“The situation in the south-east of Ukraine is very tense. People are trying to protect themselves. What this Nazi gang is capable of, we know. I am very sorry that respected politicians in Kiev decided to resolve their issues with the help of this terrible force. The Federation Council cannot remain indifferent to the fate of its compatriots in Ukraine, which is why such a decision was made, ”said Konstantinov at a press conference.

He also advised the Ukrainian authorities "not to engage in war with their own people."
Ctrl Enter
Noticed oshЫbku Highlight text and press. Ctrl + Enter
We are
Military Reviewin Yandex News
Military Reviewin Google News
369 comments
Information
Dear reader, to leave comments on the publication, you must sign in.