March 3 2014
144
The “world community” - well, at least, this is how the authorities of the United States of America, the puppet Canada and 28 members of the European Union call themselves - became “express concerns” over the “actions” of the Russian Federation in connection with the situation in Ukraine.


Of course, of course ... Concerns, according to the laws of the world-famous scenario, the western “cohort” begins to speak at the very moment when the situation does not begin to evolve to the tune of their sound. The pipe played when the “popazioners” based on ultra-radicals (I ask you not to consider this as the author's typo) turned a large state in the very center of geographical Europe into a medieval effigy. The pipe played when armed “people” with portraits of accomplices of Nazism broke into administrative buildings, dragged representatives of legitimate authorities by the hair, killed policemen, burned stadiums, conservatories, trade union houses, beat up compatriots only because they did not speak Ukrainian.

And now the tune plays, but only “popazitsii” under it “can not” dance. Why? Yes, because those who, forgive non-literary bluntness, said their weighty word, frankly got this rabble, who calls himself “the new power”. Such a word was said by Crimea, Kharkov, Donetsk, Lugansk, other cities of the east and southeast of Ukraine. And now, not seeing the synchronicity of dancing to their tune, “progressive” Europe (although it should be noted, not all) together with progressive States scratching their heads… They say, why ... Why aren't “democratic achievements” under the banner of ultra-radical organizations in Ukraine? ? Why not put up a star-striped and other "correct" banners in all cities and villages of Ukraine?

And then there is also a new blow - in whole regions not only the flags of the EU and the USA do not appear, but even quite the opposite - Russian tricolors are hung on administrative buildings ... In Washington and Brussels they decided to carefully examine the very tune under which the “dances” went first and almost synchronous - maybe something is clogged up, maybe we dudim the wrong hole ... It seems that everything with the “instrument” is normal, but what happens then? - progressives are wondering. They figured out - well, yes, this is all Russia ... Again, it incites, you know, trying to cultivate the dictatorship again, again the “Putin gebnya” and everything in that spirit.


Many western publications immediately decided to enter the usual way of covering the events. On the front pages and in the main reports of the majority of “democratised at the time of this” media, images of how Russia “annexes” Ukrainian territories appear. The main “proof”, which is immediately used, is - look, look - the Russian flags on the administrative buildings of Sevastopol, Kharkov, Donetsk. Well, if Russian flags mean, naturally, Vladimir Putin came incognito there and with the cry “Putin! Putin! ”He installed the tricolors of the Russian Federation on the buildings ... Sentry !!! 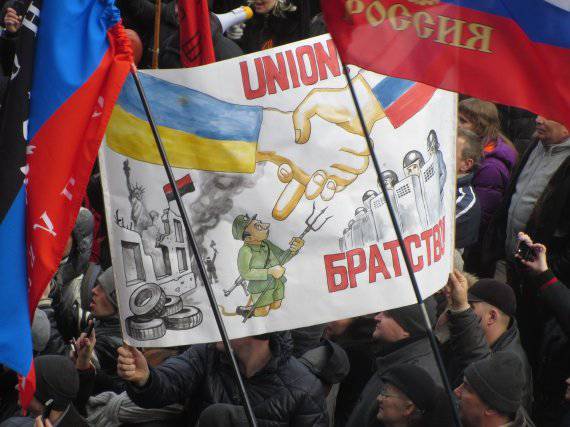 That is, when the flags of the EU and the banners of the UPA, the UNA-UNSO maydanovtsy were hung out on the buildings of the Kiev administration, on state institutions after marvelous street “talks” with European politicians who were often to Kiev, this is not a sign of imposing someone else’s political will , not deliberately stepping over the constitutional order, not wanting to seat their puppets in the imperious Kiev chairs. And you see, the appearance of the Russian state flag causes them to foam in the mouth and cause an allergic reaction throughout the tender body. Well, if you don’t like the look of the tricolor of the Russian Federation, the people will hang out the Victory banner in order to remind some people of something ...
In order to understand what kind of reaction the tough position of the Russian Federation in Ukraine causes, in the ranks of individual Western “democrats”, you can look at the pages of a single publication.
German FAZ ("Frankfurter Allgemeine Zeitung") comes out with an article entitled "Russia at the Pillory in New York." The author of the material, Andrew Ross (a political columnist for the FAZ in the States), it turns out, makes it clear that the UN has its own pillory. How does Mr. Ross politically incorrectly speak out to the "unity" of the representatives of the United States, Canada and the EU ... No one has yet called them a pillory ...

So, Ross "brings" to the "progressive public" the situation around the UN Security Council meeting, at which the Russian ambassador to the United Nations, Vitaly Churkin, said that Ukraine should return to the legal field - in particular, to an agreement from February 21 between the authorities of Ukraine and the opposition, supported by the signatures of the representatives of the governments of Poland, Germany and France. Recall that under the agreement, Viktor Yanukovych undertook to hold early elections, form a coalition government, and also decide on the return of the 2014 to the Constitution of the year. The opposition put its signatures, promising to disarm the Maidan, stop the unrest and begin to participate in the legal political format. The mentioned three EU states acted as guarantors of the execution of the agreement. But instead of providing guarantees, the EU has withdrawn, which led to the forcible seizure of power in Ukraine.
So Mr. Ross from the FAZ declares that, it turns out, European ambassadors should not give any guarantees, for attention: the agreement was ... unofficial! ABOUT! Well, well done Andrew ... Well done EU diplomats ... Everything, it turns out, unofficially. Well, a small party like that ...

And also the same columnist from the FAZ is indignant about the position occupied by China in the UN Security Council. It should be noted here that Chinese diplomats in New York said that the PRC would use its veto power if the Security Council tried to adopt a resolution against Russia. In addition, according to an unnamed source of the FAZ (information is confirmed by http://www.politonline.ru/) China held emergency talks with the Turkish authorities and allegedly convinced Recep Tayyip Erdogan of the need to close the passage through the Bosphorus to the Black Sea for NATO ships. If this is true (which, frankly, is hard to believe, given that Turkey itself is a member of NATO), then this is a real information bomb. In this regard, it is more than clear the sprinkling of Mr Ross’s saliva and the entire “progressive” West, as it turns out that the West may simply be out of work, continuing to pour threats through the media. 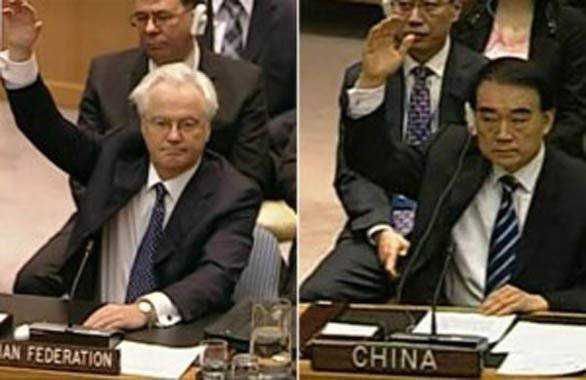 Recall that the meeting of the UN Security Council was initiated by London, and at this meeting the Russian Federation (due to the a priori declared by "some" in the UN interest of the Russian Federation in the escalation of the Ukrainian conflict) does not have the right to vote. And here such a big “piglet” to London and the rest of the “progressively utterly progressive” puts Beijing. Maybe London or Washington will impose a veto on Beijing’s veto, warning of possible sanctions against China already ... Well, that is unlikely. When talking to modern Beijing, London and Washington can only put a completely different substance in their own pants ...

Why is China ready to support Russia in the UN Security Council? One of the reasons is that China has a huge number of signed agreements with legitimate Ukrainian authorities. From the fact that many of these agreements are not being implemented today, the PRC is losing significant funds. The Russian position may allow to return the situation in Ukraine to the constitutional channel. For China, this is the best option.

The second reason is the lie of the new “Ukrainian” authorities in the person of Mr. Yatsenyuk, who in the very first days of his sitting in the prime minister’s chair, tried to stab China and please the West. Last week, Mr. Yatsenyuk argued that Beijing is filing a lawsuit for 3 billion dollars in an international arbitration court for undelivered grain to the “old” authorities. The Chinese side stated that Beijing did not file any claim and is going to settle the issues of Ukrainian debt only bilaterally without the involvement of international judges.
The third reason is the similar position of Russia and the PRC in the international arena that has manifested itself in recent years, and this position is not like the Western “partners” who have broken their teeth about it many times.

Support for the Russian position in the international arena today is extremely important, but even more important - the rigidity of one’s own position in upholding the interests of the Russian and Russian-speaking population of the neighboring state, in the capital and in the west of which radicals seized power on the basis of an extremist anti-constitutional coup.

Ctrl Enter
Noticed oshЫbku Highlight text and press. Ctrl + Enter
We are
Strangulation: the context, conduct and consequences of the American naval blockade of ChinaMilitary doctrine of the Russian Federation
Military Reviewin Yandex News
Military Reviewin Google News
144 comments
Information
Dear reader, to leave comments on the publication, you must sign in.