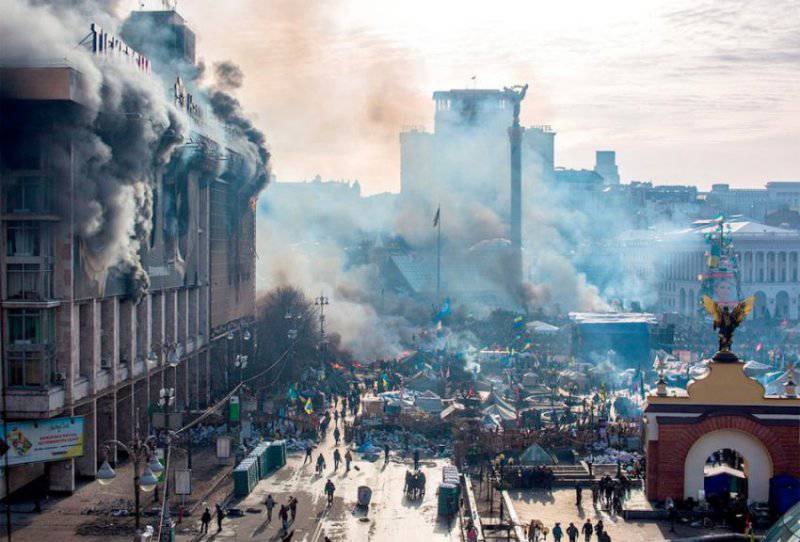 In the previous article “Freedom to Ukraine!” We said that already under President Yushchenko, Ukraine was turned into a semi-colony — a politically dependent country whose leadership was “under the hood” of the US State Department. With the “pro-Russian” Yanukovych, this situation has not changed. To become president of Ukraine, Yanukovych apparently had to give certain guarantees to Washington, the US embassy kept tacit control over Ukraine. When Washington initiated the Eastern Partnership program, he gave the command to the “elites of Ukraine” to join the European association on the terms of “Europe”, and the US Embassy in Kiev became the coordinator.

And the authorities of Ukraine, to the amazement of the whole world, went to the “Euro-Association”, without even having read the text of the Agreement, and “Europe” had the audacity and meanness to present a cynical, indentical Agreement to Ukraine: she knew that the Americans had given the command to sign it “not looking” .

In Vilnius, Yanukovych unexpectedly refused to sign the “Euro-Association”, and scandalously, on the eve of the solemn signing of the Agreement on the surrender to Ukraine to Europe. Very mysterious история... and by this he violated the order of the State Department. As one political scientist wrote, he did it at the last moment, because otherwise “something would have happened” to him. Yanukovych, apparently, knew this well, and, conversely, the assurances that he (and, therefore, Azarov) “didn’t suspect” until the last moment that the Agreement on “Euro-Association” enslaved Ukraine - these are fairy tales for simpletons. They just pulled time to the last moment.

The Vilnius “revolt” of Yanukovych is the key to unraveling the subsequent passions on euro maidan, which have grown into a brown Bandera “revolution”. The Romans said: look who benefits! This "revolution" is beneficial to Washington, by which he suppressed the "revolt" of Yanukovych. This is a “revolution” precisely in quotation marks: revolutionary camouflage, student flash mobs on the Maidan concealed a guided operation to remove President Yanukovich from power by the US Embassy in Kiev, or a new “color revolution” to change an objectionable “regime”, as the US has repeatedly done in Latin America. Bandera "Right Sector" was in touch with the US Embassy ...

At the bottom of all the events lies the decision of the States on the “Euro-association” of Ukraine. The latter was, in fact, a transition from the "quiet" orange occupation of the country to turning it into a frank colony. For this, it was necessary to destroy the development potential - the industry in the south-east of Ukraine, with its subsequent degradation into the agricultural province of "Europe". For secure securing after this is already quite "Indian" territory. It was economically beneficial to Europe, but an important condition was the peaceful nature of enslavement, so that there were no undesirable consequences for its economy.

The states received political dividends: the cleared territory of Ukraine became a springboard for the construction of an anti-Russian, as we see today, Bandera Nazi state, which remained under political control by the United States. And it was a “gun”, attached to the temple of Russia, even without nuclear weapons.

If the European version of the colonization of Ukraine insists on its peaceful "absorption", then the Americans are satisfied with the non-peaceful option, that is, the destabilization of Ukraine with the subsequent attempt to export "instability" or "controlled Bandera chaos" to Russia. As bequeathed by the American Pole and the gray cardinal of the corridors of Washington’s power Zbigniew Brzezinski, the American plan for the colonization of Ukraine has as its ultimate goal of turning it into a springboard for the destruction of Russia: “The new world order will be built against Russia, on the ruins of Russia, and at the expense of Russia.”

Yanukovych, having broken off the European peace option of Ukraine’s colonization in Vilnius, revealed the mechanism of this operation and there was a faltering start, according to V. Putin, ending instead of “Euro-association” with Bandera’s “revolution” that stirred up the whole of Ukraine.

The peaceful "European" version of the colonization of Ukraine failed, the American non-peaceful option became on the agenda, which is not at all profitable for Europe. They are “both worse” to Russia, but the American gives Russia a counterplay on the arisen contradictions between the “Atlantic allies”. In any case, this is a global provocation against Russia, as described by the American political scientist Paul Roberts Craig.

The patriarch of American politics, Henry Kissinger, said that Russia “sees Ukraine as an example of Ukraine that we (the United States) would like to do with it.” This is not only the authoritative recognition of the American authorship of the crisis in Ukraine, but also its danger to Russia. In terms of its scale, it can be compared with the Caribbean crisis of the year 1961, when the USSR undertook to defend Cuba against the States with nuclear weapons. Now the world is going to a similar crisis, and may slide to the level of confrontation 1961 year ...

Russia cannot but respond to this global provocation, because the creation of a Bandera Nazi state will lead to the rapid destruction of the industrial complex of Ukraine, and therefore civil unrest, their suppression by Bandera. Russia can not allow Bandera repression in the south-east of Ukraine. In the future, Ukraine-Russia conflict over the Yugoslav type is also possible: Croatia-Serbia.

Russia is already responding to this provocation: it conducts unplanned military exercises in a very impressive manner: the 150-thousandth group of troops is involved. The same contingent of troops was introduced by the USSR in Afghanistan. (Now there the American contingent of approximately the same number is very well stuck for us.)

It is important to note that today we are “not losing” Ukraine: it has already been lost. Today, on the contrary, on the agenda is the liberation of Ukraine from American colonization, from the Bandera pogrom initiated by them. In general, the link between the US Embassy and Bandera that has been revealed today will become a separate issue for Washington, on the subject of its complicity with the Nazis. Russia is already bringing it up for discussion by the world community, sending video of a brown coup in Kiev to the UN.

With the coming to power, the Fascists always set fire to the Reichstag, a symbolic act of new barbarians proving their barbarism. In previous articles I wondered what would become such a burning “Reichstag” in Ukraine? Only now I understood: it was Kiev that was burning black smoke from rubber tires ... And the new Bandera fascists, as well as the Hitlerites, accuse their political opponents of "terrible crimes" committed by them themselves during the coup d'état.

Ctrl Enter
Noticed oshЫbku Highlight text and press. Ctrl + Enter
We are
Situational analysis of the death of the MH17 flight (Malaysian Boeing 777), made on the basis of engineering analysis from 15.08.2014Geopolitical mosaic: Bucharest is licked to Ukraine, and consultations on a peace treaty between Russia and Japan began in Tokyo
Military Reviewin Yandex News
Military Reviewin Google News
59 comments
Information
Dear reader, to leave comments on the publication, you must sign in.