Pan-Ataman does not have a gold reserve! 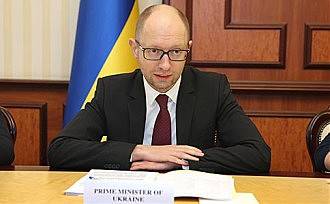 Who will lend 35 billions of dollars? Feed the poor Ukraine, plundered by oligarchs, for food! Those who were in power and who came to power today. Only 35 billions of “green” (for a minute: not so long ago, the entire gold and currency reserves of the country were estimated by this amount, until it was smashed) can be saved by the “independent” and “unitary” states. Who will give?


After all, if there is no urgent money, Ukraine will have a cover. Kapets. Sadness Lapti. Pitchfork Or, to put it scientifically, sovereign default. Bankruptcy of the state as such. For the “pan-ataman”, who staged a bloody bordelero in the country with the seizure of power using baseball bits and “Molotov cocktails,” did not have a gold reserve. As stated by the new head of parliament, Oleksandr Turchynov, there is zero in the treasury, only one debt is available, the hryvnia depreciates every day, the debt to local budgets is 20 billion UAH. The banking and financial system is cracking like the March ice under the spring sun.

Therefore, having to give up everything, you have to ask for alms. While taking steps that indicate: the next step is a cliff. So, from Monday, February 24, by order and. about. Deputy Prime Minister Oleksandr Vilkul of the Ministry of Infrastructure and Regional Development, Ukrzaliznitsya and Ukravtodor stopped all payments, except for salary payments.

The rating agency Standard & Poor's immediately reacted to this. It downgraded Ukraine's long-term foreign currency credit rating to a pre-default level. This means that the threat of financial and economic collapse of the state will exist in the next 12 months. Only after one year is the next forecast possible. If, of course, Ukraine does not become bankrupt by that time ... Finally, analysts of the German Deutsche Bank put Ukraine on the first line of the rating of countries where economic markets develop the worst.

The question arises: how can a state (or the international community) come to our aid? After all, there is no hope for internal investment - a team of government “professionals” led by Azarov did everything to drive the national economy into the shadows.

The first thing that comes to mind is Russia. Who can be closer than a relative by blood and faith? In this regard, the statement of the Minister of Foreign Affairs of Poland Radoslaw Sikorski looks symptomatic. A European official recommended that the new Ukrainian authorities establish partnerships with ... Russia!

What a twist! At first, Poland did everything, including total misinformation and dirty diplomatic methods, in order to alienate Ukraine from Russia and the countries of the Customs Union, to sever just strengthened economic ties, so that thick grains of mistrust rose from the grains of fleeting interstate doubts. And now cynically advises Ukraine: they say, ask Russia.

At the same time - do not touch us. As explained by the Prime Minister of Poland Donald Tusk, Warsaw cannot become a source of financial subsidies. The maximum that the Poles can give is several billion, and not zloty, not dollars. And not just like that, but accompanying his “noble gesture” with a whole bunch of requirements, the fulfillment of which will be mandatory for Ukraine. By the way, the formation of a new government is not such a condition. Poles need more - clearly defined goals and objectives, which, of course, will be of interest, first of all, to them, who will respond to their national and geopolitical aspirations. Pretty friends, do not say anything ...

However, Europeans are all like that. The European Union and certain states like Great Britain or Germany declare that they are ready to give money. But on such conditions, which earlier Ukraine would not even consider in detail. However, now we are not “banking”. And do not have to choose. Even if financial aid resembles painful arm twisting.

After all, no one for some reason says about what kind of income Ukraine is going to return the debt. If we now take 35 billions, add to them the money that the “gas princess” borrowed and borrowed the Azarov government, then we get an amount that does not allow us to talk about any political and economic sovereignty of our state.

Noteworthy in this connection is the discussion around the offer of assistance from the International Monetary Fund. The IMF, with the habits of a coyote guarding weakening prey, did not go anywhere. And I am ready to give money to Ukraine at any time. But only in exchange for the fulfillment of the previous conditions.

Recall that earlier the fund offered money, demanding from the country's leadership a sharp deterioration in the quality of life of ordinary Ukrainians. In particular, the IMF advised to dramatically increase the cost of gas for private consumers, as well as to increase the prices for housing and communal services. Ukraine several times refused financial assistance on such terms. But today I am ready to agree. Indeed, let the stupid people rejoice that the power in the country is changing. And those who seized up to the trough, you need to stay near her. On any conditions ...

Finally, another nuance to which attention should be paid. When, in the fall, Ukraine, under pressure from oligarchic groups, hurried to Europe, the EU, seeing the critical state of the national economy, nevertheless, answered dryly: we won’t give money. And if we give, then not soon. Like, "sop" must be earned. Ukraine then, fortunately, thought better of it, turning its face to Russia. A friendly state did not make an elephant out of a fly. Do you have a problem? We will help to solve it! 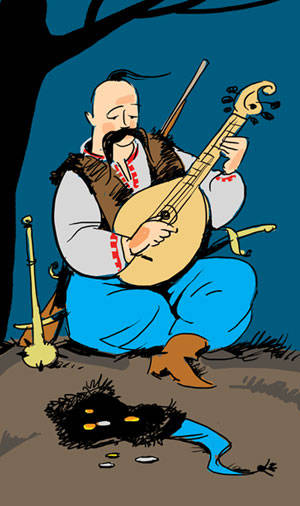 Now, when Ukraine once again made a dizzying political and economic leash, the European Union, individual European countries, the International Monetary Fund and, finally, America “sharply” found money for Ukraine. What does this turn mean? What was the opportunity to buy a cheap state with a population of 46 million? At the same time, the proposal to ask for a loan from Russia in this context looks like a mockery and it is said only that Ukraine will once again be convinced of the unfair nature of its fate. Say, no one except us can lend you. So agree - on any conditions.

And you can understand Russia. As noted by Prime Minister Dmitry Medvedev, the cooperation has not been canceled. And from promises to help do not refuse. But with whom to negotiate? For it is difficult to recognize the government of those who wear masks. It was because of the absence in Kiev of a fully-fledged and legitimate Cabinet of Ministers that Moscow slowed down the process of acquiring Ukrainian Eurobonds for 2 billion dollars. Russia wants to see what kind of person will be included in the Ukrainian government, is it possible to talk with them about something, how much new “mobility” will be responsible for words and promises.

A huge barrel of tar in the relations between the two fraternal states was the non-fulfillment of the agreement on resolving the crisis in Ukraine, signed on February 21. In the negotiations, we recall, the plenipotentiary of the Russian Federation took part. The fraternal state welcomed the found mechanism to overcome the crisis of statehood. However, the new Ukrainian government - or rather, those who declared themselves to be it - immediately violated all agreements on the timing of the constitutional reform and presidential elections.

The question arises: a violation of this word will now become the norm? Therefore, Medvedev, not abandoning the former format of cooperation with Ukraine, wants to find out first: who actually Russia will help? And for what? So that spitting and insults flew in response?

At the same time, the warmer economic relations have every chance of becoming cold again - even without taking into account politics. According to the Russian media, from April 10 gas prices for Ukraine may return from 268,5 dollars per thousand cubic meters to 400 "green". This will happen if our country stops paying for "blue" fuel. Note that Ukraine managed to close half of the debts for 2013 a year and pay the bill for January. Part of the money for payment was taken from the Russian tranche, which was negotiated last December. And from what pockets to pay now?

At the same time, Russia justifiably fears that Ukraine, left without means of livelihood, will again take on the “old”. In the sense will proceed to the unauthorized selection of gas. We were already caught by the hand several times. And the lack of money in the state treasury of Ukraine and the unstable (to put it mildly) political situation threaten poor-quality service and accidents on gas pipelines going to Europe. In general, the problem is not the right word.

Suspended cooperation with Russia quickly affected the dying Ukrainian economy. Thus, the Kremenchug Steel Plant suspended its work due to problems with product sales. This is not surprising, because the company directly worked with Russia. Karpatnaftokhim company (Kalush, Ivano-Frankivsk region) stopped working. For the same reason as the steel plant from Kremenchug. Since the beginning of February, Mariupol Azovmash has moved to a reduced work schedule.

Interestingly, those who today occupied the "high" cabinets, at least a line of economic News read?

Ctrl Enter
Noticed oshЫbku Highlight text and press. Ctrl + Enter
We are
About Stalin and KhrushchevList of destroyed the largest and most high-tech enterprises
Military Reviewin Yandex News
Military Reviewin Google News
88 comments
Information
Dear reader, to leave comments on the publication, you must sign in.