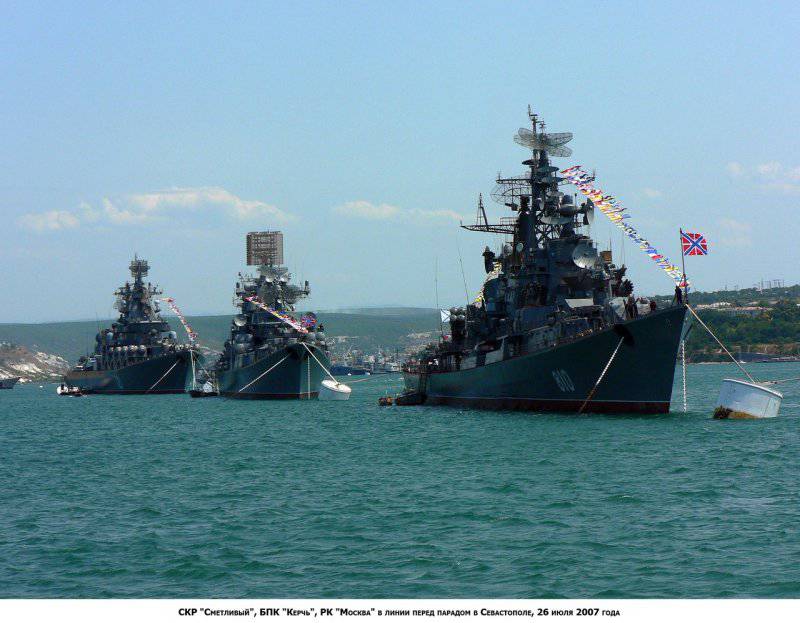 The situation in Ukraine could escalate into a large-scale war if the new regime that seized power in Kiev attempts to force the capture of Crimea. In this scenario, Ukraine can wait a very sad fate.

First you need to figure out what the forces are still in the Crimea, and what the current Ukrainian authorities currently have. As for the Crimea, the media receives very contradictory information - if you are guided by the words of officials from Kiev, then there are already more than 6 thousands of Russian soldiers in the Crimea. However, it is not yet possible to confirm this information. One can be sure that the BRT-80 convoy arriving in Simferopol and near 20 attack helicopters that flew to the Crimea (the video shows that these are Mi-35 shock and transport Mi-8). Regarding the information about the arrival of the 13 airborne IL-76 with paratroopers - this information is also not yet confirmed.

At the moment, the Russian Federation has the opportunity to deploy up to 25 thousand military personnel in Crimea - such is the quota for the Black Sea based there fleet RF In fact, the entire contingent is 16 thousand (of which 2 thousand marines). So, even if the information about the transfer of 6 thousand Russian military is correct, then officially no agreements have been violated. In addition, the Russian Federation has the right to deploy in Crimea up to 24 large-caliber artillery systems and 132 units of armored vehicles and 22 units aviation. The abovementioned troops are significantly superior in number and equipment to the Ukrainian troops stationed in the Crimea.

From the above, it can be concluded that, without violating any agreements, the Russian Federation can protect the Crimea with more than 11 by thousands of soldiers - 2 thousands of marines of the Black Sea Fleet and 9 thousands of additionally deployed soldiers (airborne or Special Forces). You can also transfer 24 MSTA-S self-propelled artillery mounts or a number of Smerch multiple launch rocket systems. On the spot, there are 20 Su-24 front-line bombers.

The Armed Forces of Ukraine can try to carry out a lightning military operation and try to take control of the Crimea. However, even if they can organize and dispatch half of their army (which seems rather difficult, given the chaos prevailing in the country), the success of this event will tend to zero.

Suppose that the Ukrainian Armed Forces send 40000 people to the war for the Crimea, 500 tanks etc. as part of the ground forces and try to provide them with support for their Air Force (20 Su-27, 80 MiG-29, 36 Su-24, 36 Su-25). Once again, we note that this alignment is practically impossible, if only because a significant part of the equipment is on paper, but is not capable of fighting in fact (this is especially true for aviation). But even with such an optimistic variant for Ukraine, the troops will fail, as it will not be possible to quickly overcome the very narrow Perekop Isthmus (connects the peninsula with the mainland and has a width of only 7 km). Those 11 well-trained soldiers will be quite enough to keep him, especially given the powerful artillery support they can provide with the ships of the Black Sea Fleet of the Russian Navy and modern aviation, which is already fully operational at the airfields of the Western and Central military districts of the Russian Federation.

Most likely, very soon after the grouping of the Armed Forces of Ukraine receives such a tough rebuff, it will simply fall apart and turn into a disorderly retreat, with a significant part of the officers generally moving to the side of the Russian Federation, since the Russians from Eastern Ukraine also serve in the army.

Further events can develop in different ways - taking advantage of the situation, the RF Armed Forces can go further and try to establish control over Eastern Ukraine - there should be no problems, given the high level of Russia's popularity in the eastern regions. In this situation, the newly minted authorities in Kiev have every chance of falling in front of even more radical groups of people. However, the positive point of such a scenario is that the probability of a civil war is minimal, and the question of Eastern and Western Ukraine can be resolved once and for all.

In another version, the Russian Federation may simply limit control over the Crimea. Then a real civil war could flare up in Ukraine. Scattered and combat-armed units of the Armed Forces of Ukraine will greatly contribute to this. Most likely, everything will start with the fact that radical forces will go from Kiev to “bring order” to the East. In the conditions of chaos arising from the hostilities, heavy weapons from combat units will easily fall into their hands, in addition, many servicemen from Western cities may join them. Given the huge arsenals, which, although well and decently stolen and sold out over the 20 years of independence, they will be enough to cause irreparable damage to the state and kill many people. The outcome of such a scenario is absolutely unpredictable - the only thing that is clear is that the Ukrainians, in any case, will be the losing party.

So it remains only to hope for the prudence of the Kiev authorities, the best solution for which would be to give the population of Crimea to decide for themselves about their future without interfering with the planned referendum. Instead of empty threats and tantrums, the leadership would have to think about the reasons for the situation. Is there something surprising in the fact that this will be the reaction to the fact that the first laws of the new government will be anti-Russian? Since the country's authorities do not want to reckon with the opinion of a significant part of the population of their own country, these people will have to think and manage their own future.

Ctrl Enter
Noticed oshЫbku Highlight text and press. Ctrl + Enter
We are
A great interview with Sergey Lavrov: about Ukraine, Obama and IranWhat you didn't want to know about England
Military Reviewin Yandex News
Military Reviewin Google News
134 comments
Information
Dear reader, to leave comments on the publication, you must sign in.