In Donetsk, the RSA tore off the flag of Ukraine and hoisted the flag of Russia. Police moved to the side of the "people" 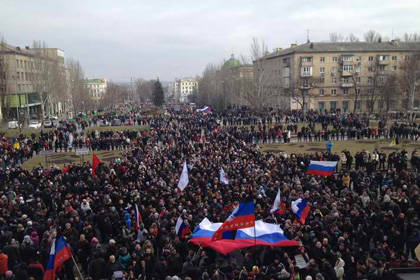 In Donetsk, protesters tore the flag of Ukraine from the flagpole in front of the regional state administration building and hoisted the flag of Russia.

As a UNIAN correspondent, during a rally of supporters of Russia in the square to them. Lenin's jubilant crowd of many thousands chose Pavel Gubarev as the “people's governor”, ​​who calls himself the commander of the so-called “People’s Militia of Donbass”.

He, advocating the accession of Donbass to Russia, said that residents of the Donetsk region should not obey the current chairman of the Donetsk Regional State Administration, Andrei Shishatsky, who "betrayed the people of Donbass" and accepted the new power in Kiev.

Also, "the security forces must submit to the new governor before the elections," Gubarev said, referring to himself.

A crowd of thousands of protesters surrounded the building of the Donetsk Regional State Administration, did not listen to either Shishatsky or Donetsk Mayor Alexander Lukianchenko.

Under the shouts of the protesters "Well done!" And "Russia!" The flag of Ukraine was torn off.

In addition, people chanted: "Donbass!", "Referendum!", "Bandera will not work!", "Donetsk is a Russian city!".

Also, according to the publication zadonbass.org, the protesters demanded that the governor of the Donetsk region Andrei Shishatsky should come to them. They demand that the regional authorities disobey the Kiev authorities, not transfer taxes and fees to the national budget and a referendum on federalization.

The head of the Main Directorate of the Ministry of Internal Affairs of Ukraine in the Donetsk region, Roman Romanov, went out to rally outside the building of the Donetsk Regional State Administration.

He announced to the protesters that the region’s militia was now subordinate to the people.

As previously reported, today in 12.00, near the Donetsk Regional State Administration, a rally began in support of the constitutional rights of the Berkut police special forces. Also, protesters in the Donetsk Lenin Square expressed support for Kharkiv, Crimea, and other regions of the south-east, where they have already demanded federalization.

About an hour ago, the protesters made some attempt to storm the RSA. But now they just stand by the building and block it.