Get up, the country is huge!

March 1 2014
306
On Saturday and Sunday (1-2 of March 2014 of the year) in Kharkov and other major cities of eastern Ukraine, actions are planned to be held by opponents of the so-called new Ukrainian “authorities” and the policies that representatives of these “authorities” are going to send (and in some cases already send ) on the territory of Ukraine. According to information received from Kharkiv citizens who are going to take part in these actions, the name of the popular protest will be “Russian Spring” - as a kind of counterbalance to all those pro-Western “springs” that have recently wreaked havoc on a vast territory: from North Africa to Central Asia .


“Russian Spring” is actually the first general performance of the Russian-speaking population in the eastern and southeastern regions of Ukraine, who are not going to dance to the tune of radicals trying to impose their own understanding of the order in the country. 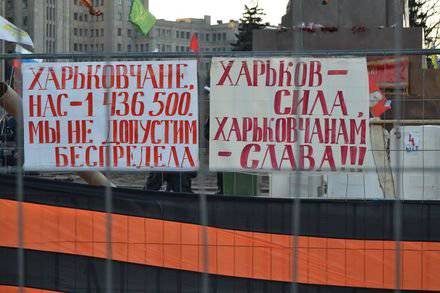 Initially, there was information that the acting head of the city administration, Gennady Kernes, is going to organize “his Maidan” on Independence Square of Kharkov. However, the majority of Kharkiv people recently have a persona of Gennady Kernes, to put it mildly, an ambiguous reaction. The main reason is that Kernes himself allows himself to make very ambiguous statements. One of these was heard at the rally, which was formally dedicated to the protection of the monument to Lenin in the city center. Then Kernes, reflecting on the new Ukrainian "rulers", announced that they even included a couple of Kharkiv citizens (well, and that, they say, such, if one - Igor Shvaika represents radicals from the Freedom party, and the other - byutovts Arsen Avakov), and precisely because, quote:

Let's tolerate and give time to the new government to realize its powers, ideas and fulfill its obligations.
For obvious reasons, the city governor, who once again called for “being patient and giving time”, and who made it clear that he was not against the new “government” in Ukraine, made a negative impression on the audience who listened to the opinion of the residents of the city Gennady Kernes. . Perhaps this position of the Kharkiv mayor was one of the starting points for preparing for an alternative rally - the весна Russian Spring ’rally with a clear, if you can say so, anti-Maid orientation. Another starting point for the consolidation of the Russian world in the east of Ukraine was the Russian position manifested in Crimea. If initially the majority of residents of the eastern regions were in a state of confusion, the cause of which was the somewhat detached position of the Russian Federation, then after quite indicative actions of “unknown armed people” in the ARC (Autonomous Republic of Crimea) with reliance on local authorities (absolutely, by the way, legitimate) and when relying on the opinion of Crimeans, the east of the country also began to show its tough civil position. 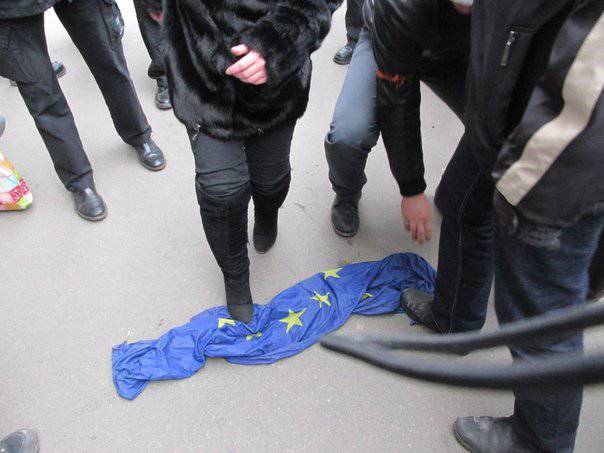 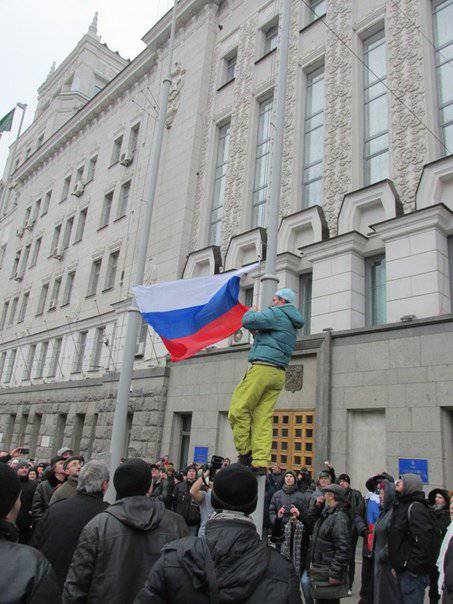 At the rally "Russian Spring", according to information received by the "Military Review" from Kharkiv citizens who are ready to take a direct part in it, it is planned to declare the new Ukrainian "authorities" illegitimate. This means that residents of the Ukrainian East gather in the image and likeness of the inhabitants of Crimea to rely on regional parliaments, whose legitimacy in this situation is beyond doubt. Another important step that Kharkiv residents and residents of the neighboring eastern and south-eastern regions of Ukraine are going to take is to decide that all taxes and duties in the industrial East of the country are not intended to be transferred to the state treasury for the simple reason that today it is controlled by a handful relying on neo-Nazi formations of illegitimate parliamentarians and appointed in the mode of ochlocracy (under pressure from radical minded thugs from the Right Sector) ministers.
From the February 28 adopted Kharkov manifesto ("Verb"):

Kharkiv and all residents of the South-East! An armed coup took place in the country. Under the chanting of the crowd intoxicated with money and stimulants, a typical junta came to power in Kiev. Her military units occupied the administrative and power structures of the state.

In this war, the Southeast is trying to appoint the loser in advance. The landings of the zonder command from the Right Sector and other neo-fascist organizations are sent to our cities and villages. The administrative buildings of our cities and regions are occupied by armed extremists. Gangs of insane "winners" right on our streets are terrorizing civilians for refusing to publicly support fascist slogans. The fascist punks, under the approving cries of sympathizing "peaceful protesters," demolish our monuments and stain the walls of our houses with Nazi symbols. Local authorities have forgotten that the grandfathers and great-grandfathers of their voters won the Great Patriotic War.

We must require local authorities to perform their duties. We chose them. They represent us. They must follow the will of their citizens. We emphasize: Kharkiv residents and residents of the South-East strongly oppose the armed coup; categorically against the illegitimate Verkhovna Rada; categorically against the destruction of our country and the civil war imposed on us. We are ready and we will fight for peace and prosperity in our home, and remind everyone: we will never hit anyone first. But we will not allow the ideologists of Western Ukrainian fascism and their assault troops to impose their will and their power on us. We are for the territorial integrity of Ukraine, but we demand its early federalization.

It is noteworthy that not only the Russian-speaking east and south of Ukraine speak against the illegitimate government, which hangs on all new ranks and titles in Kiev. After the new “government” canceled the law on regional languages ​​(and this is not only Russian, but also Hungarian, Bulgarian, Romanian, Slovak, etc.), a wave of discontent swept across the territory of the Ukrainian west.

The public organization of the Carpathian Rusyns (Carpathians), a people not recognized by the authorities of Ukraine as a national minority, “Transcarpathian Patriots” sent a very eloquent ultimatum to the “Right Sector” http://novezakarpattya.com/:

Due to the fault of corrupt officials through our native land - Transcarpathia - today is in flames of civil war. News remind reports from the battlefields. Under the pretext of lustration of power, violence, looting, extortion, kidnapping flourishes. The events of recent days have shown that the police and the SBU are not able to restore order in the region, where the "real masters" of the region were gangsters who are hiding under the guise of the Right Sector and other organizations of unknown origin.

We, members of the Transcarpathian Patriotic Organizations of the Carpathoros, demand that within 48 hours:
1. Police and other security agencies mobilized all employees to ensure order in the area.
2. The heads of councils at all levels (regional, district, city), regardless of party affiliation, resign.
3. Release all administrative buildings from the self-proclaimed "mayors" and other drunken trash.
4. To prohibit the actions of all radical nationalist groups that infringe upon the rights and freedoms of Transcarpathian national minorities.
5. Deputies of the Verkhovna Rada to appoint re-election to all local governments in the Transcarpathian region.
All politicians of Transcarpathia and their pocket “field commanders” should remember once and for all: the Transcarpathian authorities belong to Transcarpathians and, if necessary, we will prove it by force. Remember, we know where you live, what kind of cars you drive, where you steam bath.

It is noteworthy that the text of the ultimatum in this edition was deleted a few hours later, but during the time during which it “hung” on the source site, other media outlets managed to spread it. In response, representatives of the new Ukrainian authorities stated that the ultimatum of the Carpathian Rusyns was an attempt to put pressure on the "free" Ukraine from the side of foreign provocateurs, primarily from Slovakia and Hungary. After all, what kind of new “ukrovlasties” offended by God are - well, everyone, you know, they are being pressured, and through the thorns of this “pressure” they lead the country, you know, exclusively to prosperity and harmony and appeal to Washington and Brussels ...

True, here, in a certain sense, Kiev was ahead of the official Budapest and Bratislava, which had already sent their appeals to Brussels in order to find out which, actually, the basis of accusations in their direction from Kiev, and on what basis languages ​​in Ukraine.

Rallies against self-proclaimed anti-constitutional authorities will be held in Kharkiv, Donetsk, Odessa and other cities of Ukraine. 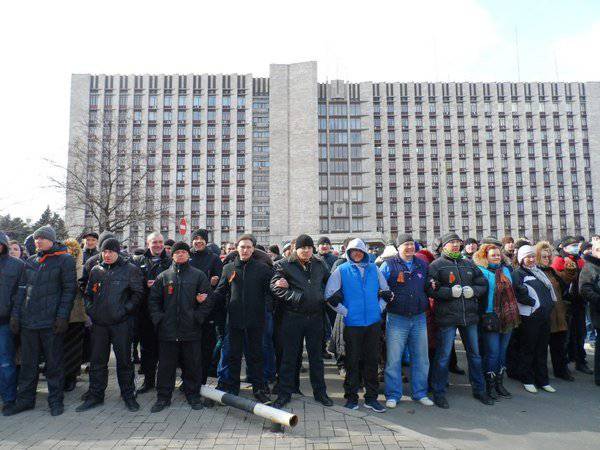 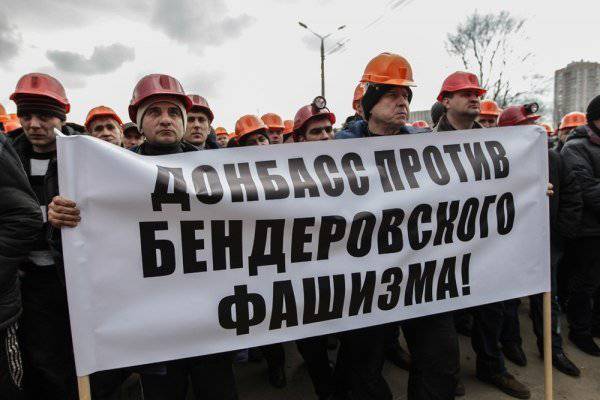 The number of people's self-defense detachments is growing, ready to resist neo-fascist aggression. In response to the orders of the new "rulers" of Kiev, to abandon the separatist sentiments, the Ukrainian south and east declare: for the unity of Ukraine, one thing is enough - let the "power" introduced into the government offices by neo-fascists from the Right Sector disappear!

PS Billionaire Poroshenko, representing that very “new” Kiev government (he is one of the Maidan sponsors), was sent out of Crimea under a friendly shout of “fascist!” And “traitor!”, Sending a taxi to the airport ...

Ctrl Enter
Noticed oshЫbku Highlight text and press. Ctrl + Enter
We are
Who and how protests today in KharkovKharkiv resistance movement: "We are uniting to return home"
Military Reviewin Yandex News
Military Reviewin Google News
306 comments
Information
Dear reader, to leave comments on the publication, you must sign in.