Advanced Research Fund should engage in high-risk research, which opens up the possibility of creating weapons of the future 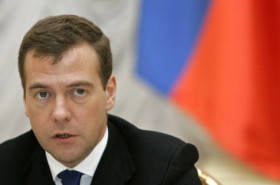 The Foundation for Advanced Studies (FPI) should be engaged in high-risk research, which opens up the possibility of creating weapon of the future. This was announced today by Russian Prime Minister Dmitry Medvedev at a meeting on the interaction of FPI with organizations engaged in scientific and technical activities.


"Opportunities should be opened for creating weapons of the future that provide the country’s long-term strategic needs for protection against predictable critical risks and threats," Medvedev said. According to him, the military departments are also engaged in such projects, however, “the Fund’s breakthrough projects should have a wider horizon of foresight and forecasting, thus anticipating the measures of the state armament program.”

For this, the head of government believes, the FPI needs to work more closely with customers, organizations of the defense complex, commercial structures operating in this field, institutions of the Russian Academy of Sciences, universities, the Russian Science Foundation, and also involve design and development teams in this activity. “We need to concentrate on what the look of the Armed Forces will be in 20-30 years,” Medvedev added.

In addition, as the head of government believes, the Fund should also contribute to the solution of socio-economic problems: the use of mining opportunities in the Arctic, the formation of research and production clusters in the Far East and other regions, the development of promising medicine. At the same time, “The Fund needs to look ahead and put forward non-utilitarian solutions that float on the surface, since this is the Fund for Advanced Studies, and not a simple CB,” the ITAR-TASS quoted the prime minister.