1 March, 1954, the United States made a hydrogen bomb blast on the Bikini Atoll 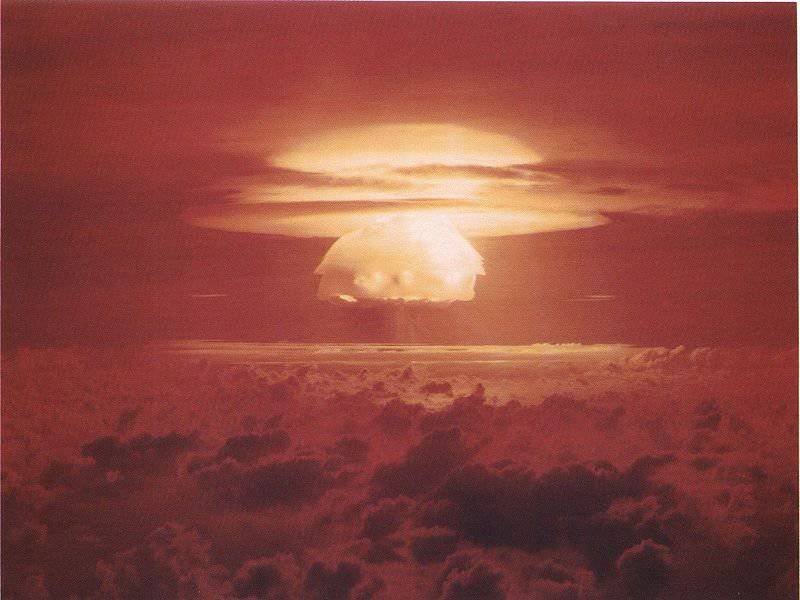 60 years ago, 1 March 1954, the United States exploded a hydrogen bomb on the Bikini Atoll. The power of this explosion was equivalent to the explosion of thousands of bombs that were dropped on the Japanese cities of Hiroshima and Nagasaki. It was the most powerful test ever made in the United States. The estimated power of the bomb was 15 megatons. In the future, in the USA, an increase in the explosive power of such bombs was recognized as inexpedient.


As a result of testing, about 100 mln. Tons of contaminated soil got into the atmosphere. People suffered too. The US military did not put off the test, knowing that the wind was blowing towards the inhabited islands and that the fishermen could suffer. The islanders and fishermen were not even warned about the trials and possible dangers.

Thus, the Japanese fishing vessel "Happy Dragon" ("Fukuru Maru"), which was located in 140 km from the explosion, was exposed to radiation, 23 people suffered (later 12 of them died). According to the Japanese Ministry of Health, as a result of the Castl Bravo test, more than 800 Japanese fishing vessels were subjected to various degrees of infection. They were about 20 thousand people. Residents of the atolls Rongelap and Ailinginae received serious doses of radiation. Some American military were also affected.

The world community has expressed its concern about the powerful strike war and radioactive fallout. Several prominent scholars, including Bertrand Russell, Albert Einstein, Frederick Joliot-Curie, made a protest. In 1957, in the Canadian town of Pugwash, the first conference of the scientific movement was held, the purpose of which was to ban nuclear tests, reduce the risk of armed conflicts and jointly search for solutions to global problems (the Pugwash movement).

Of stories create a hydrogen bomb in the US

The idea of ​​a bomb with thermonuclear fusion, initiated by an atomic charge, was expressed in 1941 year. In May, 1941, a physicist and scientist Tokutaro Hagiwara from the University of Kyoto in Japan, suggested the possibility of initiating a thermonuclear reaction between hydrogen nuclei using an explosive chain fission reaction of uranium-235. A similar idea, in September 1941, at the Columbia University was expressed by the outstanding Italian physicist Enrico Fermi. He presented it to his colleague the American physicist Edward Teller. Then Fermi and Teller suggested the possibility of initiating a nuclear explosion of thermonuclear reactions in a medium of deuterium. Teller caught on this idea and during the implementation of the Manhattan project, he devoted most of his time to work on the creation of a thermonuclear bomb.

A group of brilliant scientists from the USA and Europe, which worked at the Los Alamos laboratory, in the course of their work on creating nuclear weapons, also touched upon the problems of the deuterium superbomb. By the end of 1945, the relative holistic concept of the “classic super” was created. It was believed that the flux of neutrons emerging from the primary atomic bomb based on uranium-235, can cause detonation in a cylinder with liquid deuterium (through an intermediate chamber with a DT mixture). Emil Konopinsky suggested adding tritium to deuterium to reduce the ignition temperature. In 1946, Klaus Fuchs, with the participation of John Von Neumann, proposed using a new initiation system. It included an additional secondary node from a liquid DT mixture, which was ignited as a result of the radiation of the primary atomic bomb.

The Teller employee Polish mathematician Stanislav Ulam made suggestions that allowed the development of a thermonuclear bomb to be translated into a practical plane. So, to initiate thermonuclear fusion, he proposed to compress thermonuclear fuel prior to its heating, using the primary fission reaction and placing the fusion charge separately from the primary nuclear component. Based on these calculations, Teller suggested that X-ray and gamma radiation, caused by the primary explosion, will be able to transfer enough energy to the secondary component, will allow to initiate a thermonuclear reaction.

In January 1950, US President Harry Truman announced that the United States would work on all types of atomic weapons, including the hydrogen bomb ("superbomb"). It was decided to conduct the first ground tests with thermonuclear reactions in 1951. So, they planned to test the “reinforced” atomic bomb “Point”, as well as the model of the “classic super” with a binary initiating compartment. This test was named "George" (the device itself was called the "cylinder"). During the preparation of the test, “George” used the classical principle of designing a thermonuclear device, where the energy of the primary atomic bomb is held and used to compress and initiate the second component with thermonuclear fuel.

9 May 1951, the test "George" was conducted. On Earth, the first small thermonuclear flame broke out. In 1952, construction of a lithium-6 plant began. In 1953, production was launched.

In September, 1951, in Los Alamos, decided to develop a Mike fusion device. 1 November 1952 year test of a thermonuclear explosive device was carried out on the enolivet atoll. The power of the explosion was estimated at 10 — 12 megatons of TNT equivalent. Liquid deuterium was used as a fuel for thermonuclear fusion. The idea of ​​a two-stage device with the configuration of Teller-Ulam justified itself. The device consisted of a conventional nuclear charge and a cryogenic tank with a mixture of liquid deuterium and tritium. The “spark plug” for the thermonuclear reaction was a plutonium rod, which was located in the center of the cryogenic tank. The test was successful.

However, there was a problem - the superbomb was designed in a non-transportable version. The total weight of the structure was more than 70 tons. It could not be used during the war. The main task was the creation of transportable thermonuclear weapons. To do this, it was necessary to accumulate a sufficient amount of lithium-6. Enough accumulated by the spring of the year 1954.

1 March 1954, the Americans conducted a new thermonuclear test "Castle Bravo" on the Bikini Atoll. Lithium deuteride was used as a thermonuclear fuel. It was a two-stage charge: an initiating atomic charge and thermonuclear fuel. The test was recognized as successful. Although wrong in the power of the explosion. He was much more powerful than imagined.

Further tests allowed to improve the thermonuclear charge. 21 May 1956 made the first bomb dropping from an aircraft. The mass of the charge was reduced, which reduced the bomb. As early as 1960, the United States was able to create megaton class warheads that were deployed in nuclear submarines.
20th Century Moments: 1954 Bikini Bomb Explosion

Ctrl Enter
Noticed oshЫbku Highlight text and press. Ctrl + Enter
We are
Dragon-horse: the “new man” of changing Japan. (A dramatic story in several parts with a prologue and an epilogue) Part OneExercises with the use of nuclear weapons
Military Reviewin Yandex News
Military Reviewin Google News
8 comments
Information
Dear reader, to leave comments on the publication, you must sign in.