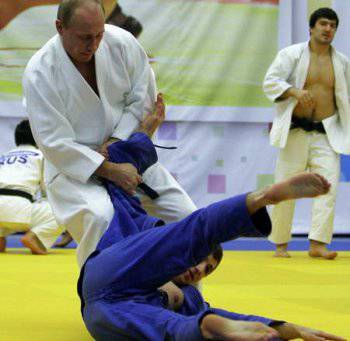 
Never been a passionate fan of ju before! Apparently because all his life (young) was engaged in contact martial arts and preferred the technique of shock to all other techniques of the fight. As life shows - in vain! And pushed me to rethink, misunderstood earlier, the policy pursued by our President. More precisely - his methods of achieving results in politics.

What does ju do philosophy mean? The quintessence of ju do is an ancient Japanese legend about a branch that has been bent under the weight of snow, and then straightened and thrown off the stuck snow. Or else, "Give in to win."

It is precisely the embodiment of this principle in life that we have the opportunity to observe by following Putin’s political moves.

If we follow the activities of the Russian President, we will see a great example of using the method of "soft power" in politics. This can also be seen in the fact that at the very beginning of his presidency, Putin, having compromised with the newly-made Russian oligarchs that came into force at that time, later taught them to bear the money in the “grain depot”, ensured the presence of the State in the most “grain” areas of the economy, and in some, they provided 100% state supremacy. It was this policy that allowed him not to break under the pressure of the then “financial monsters”, squeeze out the most arrogant and unprincipled ones from the Russian economy, and some from the political life of the country. This policy, after a series of not very happy years, allows us to be proud of the fact that our country is not just a subject of international politics (Ukraine, nominally, the same is still a subject), but a subject forming political weather on the Earth ball. This is evidenced not only by the assertions of people supporting the current Russian policy, but also by the unintentional admissions of Russia's opponents themselves.

Another no less eloquent example is Syria. The whole world watched (who with gloating, who with sympathy, and who with anger), as a sovereign country with an absolutely legitimate President at its head, tried to chew and swallow an international, not sickly armed code. Skolko cries were on the topic that Russia will merge, betray, will not stand. We know the state of affairs there today. The war is not over, but Asad successfully grinds a hired bastard and, what is indicative, at the most dramatic moment of the Syrian epic, Russia with its authority and weapons did not allow the same bandyugans that ironed Yugoslavia, Iraq and Libya to strike at Syria.

If you take a closer look and “owe” to many statements of Western politicians, then through the arrogance, hysteria and evil concealment of their speeches, interviews and statements, the envy and fear of Russia gaining power is clearly read.

This can be seen even on the example of the latest events in Ukraine. The banderlozhya gang of protoukrovs, who came to the presidential toilet at the residence of Yanukovych and, on the basis of this, imagined herself a political elite, perfectly realized that without a Russian loan she would not fall into the deepest ass and no Western philanthropists would save her and simply could not. Western sponsors, for the most part, are themselves in debt, as in silks and cutting back on social programs in these sponsor states themselves, slowly pushing them towards internal social conflicts. It’s just not up to the rescue of the Ukrainians with all these “today’s all Georgians and all our Ukrainians today” (if anyone remembers the fiery speeches of McCain and Co.).

Okay, money. But the military power of Russia today discourages even the most eager to weld states. After all, there were sad, apologetic words from a very high-ranking US military that the states have no plans in case of an invasion of Russian troops in Ukraine. As M. Zadornov says, “Don't get rid of your grandmother!” So that the minkees and there were no plans! ... A hundred times - "Ha ha ha!" They have plans and always. They are not always ready for the fact that they can meet a strong opponent. And such is Russia at the moment.

And, finally, the events of the last days. Many of us see the visible part of what is happening in the struggle for Ukraine and, in particular, for the Crimea. But if you try to bring together several disunited (seemingly) facts, then a quite clear line of “soft power” emerges in Putin’s policy.

1. In the midst of the battles on the Maidan and the streets of Kiev, Putin was silent and, if he did, then that is the internal affairs of Ukraine. (“Aha! Putin is trembling! Putin is silent!”)

2. Russia confirms its desire to fulfill the loan agreement to Ukraine. With a reservation - in the presence of a legitimate government and the normalization of the situation. ("Aha! Putin is trembling! Wants to bribe!")

3. Russia does not participate in any large-scale international consultations on the topic of Ukraine, emphasizing that this is Ukraine’s internal affair. ("Aha! Putin has nothing to say! He is in a panic! Putin is silent!")

4. The State Duma of Russia is considering a simplified procedure for granting Russian citizenship to Ukrainian citizens. (“Che for Putin's arrogance! ... Why Putin is silent?”).

5. A delegation from all factions of the State Duma of the Russian Federation arrives in Crimea. (“What are they plotting there? Get it from Ukraine!”)

6. In the cities of the south-west of Ukraine, the resistance to arbitrary tyranny is growing.

7. Sevastopol removes the flags of Ukraine from state institutions and raises the flags of Russia. Active movement for accession to Russia. (“Right now, we will send the trainloads of the friendship train. Gee, gee, gee!”)

8. In Sevastopol and Simfiropol, “unknown, armed people” enter buildings, produce a preventive “chees” and set up surveillance of the airport. (Putin is silent)

9. Russian armored personnel carriers in the amount of eight units were located in the village of Ukromniy. (Putin is silent again)

10. Ukrainian security forces call the Russian military and warn that they are being sent to intercept Russian armored personnel carriers! (“So these KGB officers started together with the Moskalians”).

11. Ukrainian security officials are making a statement that they can’t recognize the Gopnik, who had mounted the presidential toilet, as a legitimate authority.

12. The Ukrainian warship "Hetman Sagaydachny" raises the Russian tricolor instead of the Ukrainian flag and is waiting for it the other day with the arrival in Sevastopol. (from the editors - information is not confirmed)

13. The State Duma of Russia considers the Law on the accession of a part of a foreign state, if requested. (I think they will certainly do. And Putin is silent!)

14. In Simferopol, Russian passports will be issued to the Berkut fighters. (Opanki! We arrived! "And Putin is silent, an infection!)

15. Moscow refuses to consult with the current leadership of Ukraine on the situation in Nenk. Urgent requests for such consultations come from the Acting President of Ukraine. (Putin - is silent. Probably the Banderlog completely intimidated.)

16. The State Duma of the Russian Federation decided to check the legitimacy of the authorities in Ukraine. ("Tak sho? Hiba we are not rosumy? Who has the machine - the one and the power!").

17. Russia began a large-scale surprise check of the troops of the defense and defense forces with the involvement of aviation, tanks and ships of the Navy. NATO “expressed concern” with this fact. (They crap one's pants, in other words).

18. Berkutovtsy blocked the two main highways on the Crimean isthmus to prevent the penetration into the Crimea of ​​"independent" bandits or Ukrainian paratroopers armed with children's shoulder blades for picking in the sandbox. ("Putin hid. Something is invented ...")

And still very, very much, guys. Putin is silent. Does not grind the tongue in vain, does not frighten and does not resent. What is the most offensive is that it does not offer money anymore and the Banderlog has already started moaning themselves, that - "... they express hope for continued cooperation ...". And the West has whispered that Russia "... could take part in the normalization of the situation in Ukraine."

So - Russia is already taking the most active part in the normalization. And Putin, yes, is silent. And once, the guys snot smear and grind the tongue in vain - it is necessary to do things.

Thank you Dzigaro Kano San for the philosophy that is so well absorbed by your students and so intelligently embodied through their deeds.

Ctrl Enter
Noticed oshЫbku Highlight text and press. Ctrl + Enter
We are
Interview of V. Putin to Channel One and the Associated Press AgencyWhat you didn't want to know about England
Military Reviewin Yandex News
Military Reviewin Google News
46 comments
Information
Dear reader, to leave comments on the publication, you must sign in.