Weapon replaced the outdated revolvers and combined in itself lightness, compactness, good balancing, smoothness of forms. Data quality combined with moderate cost allowed the pistol to gain enormous popularity in the market of civilian weapons. 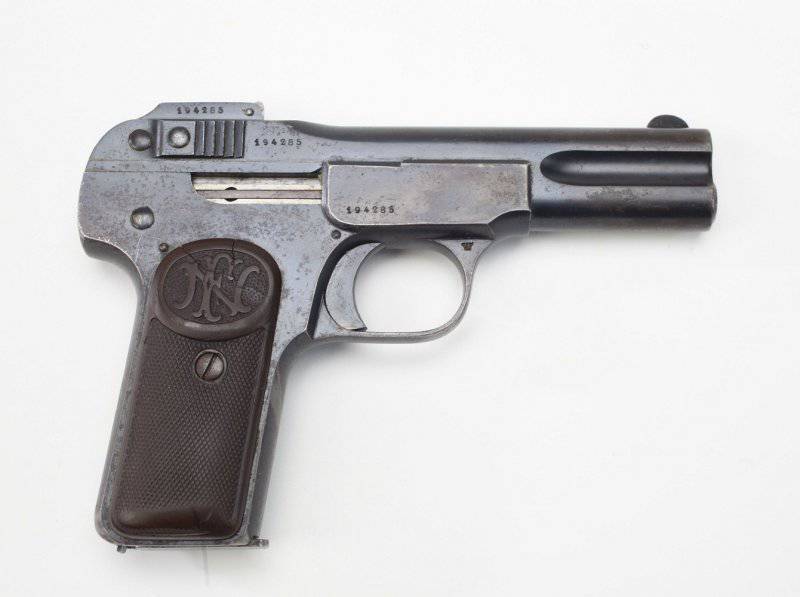 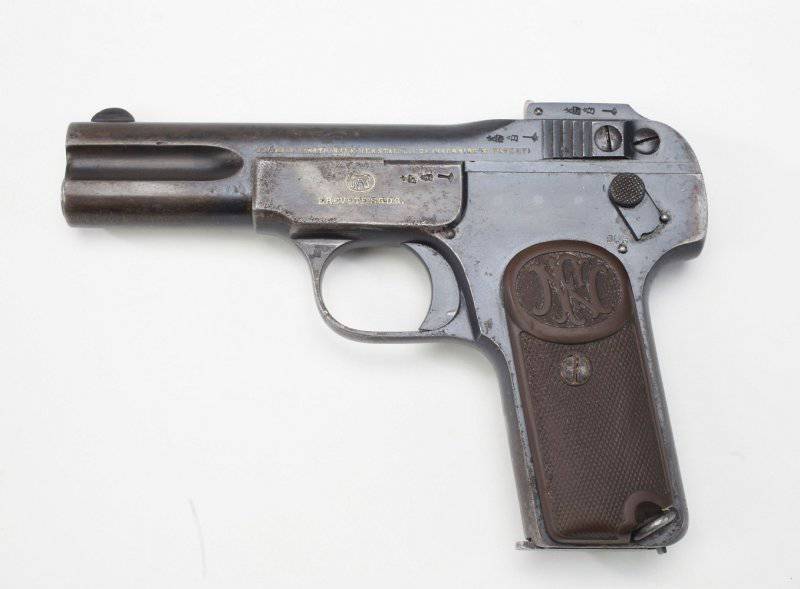 John Browning designed several pistol designs for Colt's Patent Firearms. In one of the variants of the gun, in January 1896, the designer applied the principle of automation, using the recoil energy with a free gate. By combining the bolt and barrel casing into a single piece, the bolt-on housing Browning was able to provide enough of the bolt mass needed to lock the barrel without increasing the weight of the weapon. However, Colt needed a powerful military pistol and was not satisfied with the principle of locking, the low-power cartridge not used in the pistol. Browning soon developed several weapon options for the company's requests. The unclaimed, but very promising pistol aroused interest among the representatives of the Belgian arms company Fabrique Nationale d'Armes de Guerre (National Military Weapons Factory), located in the city of Gernstal. 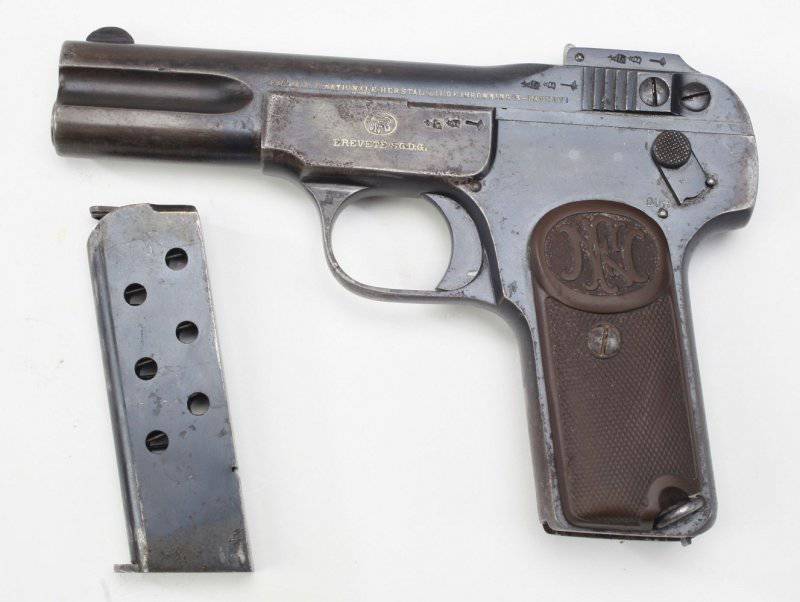 17 July 1897 was signed an agreement between John Moses Browning and company president Charles de Marmoth for the production of a self-loading 7,65 mm caliber pistol, which received the designation FN Browning model 1900. 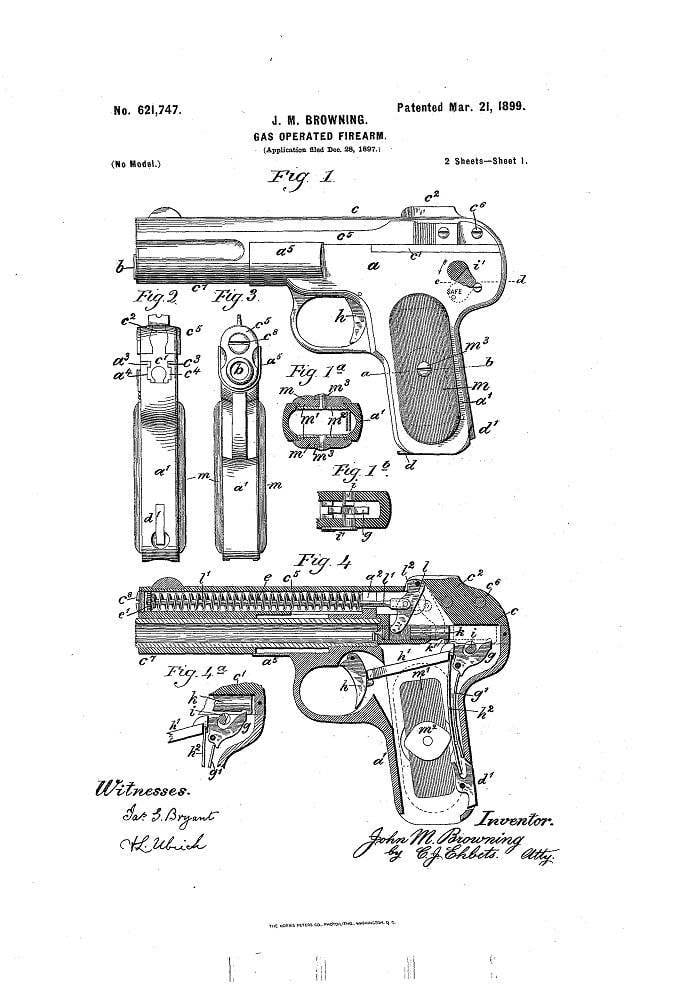 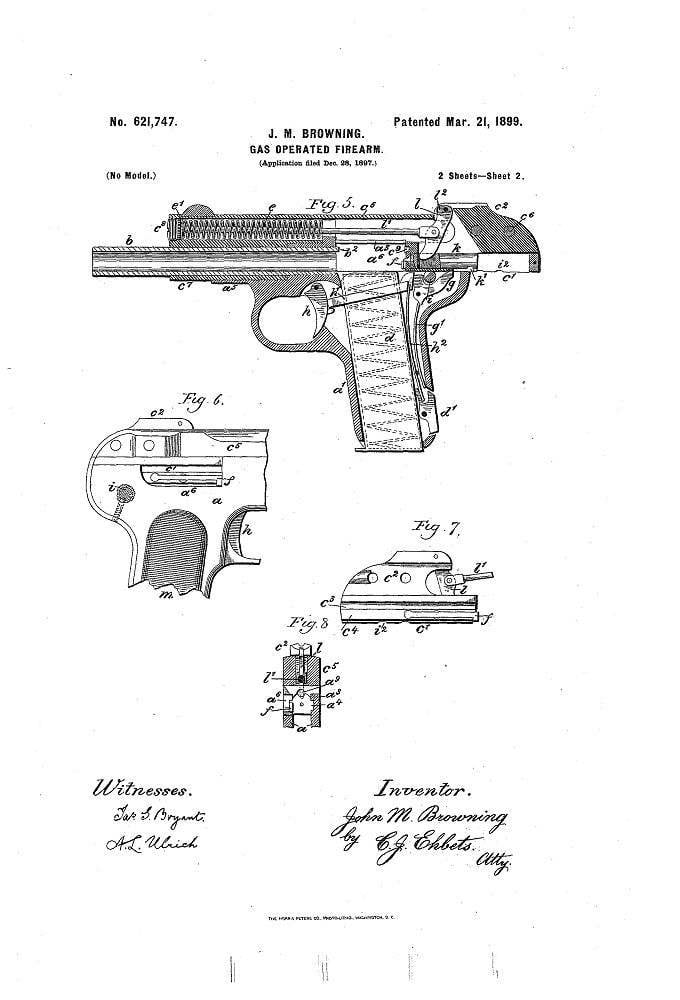 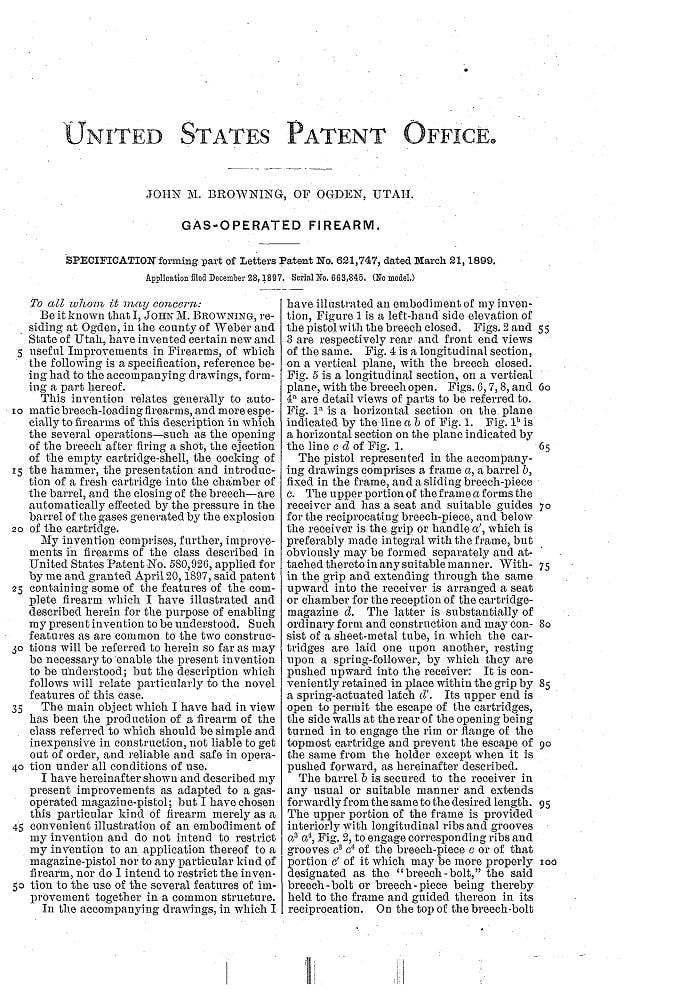 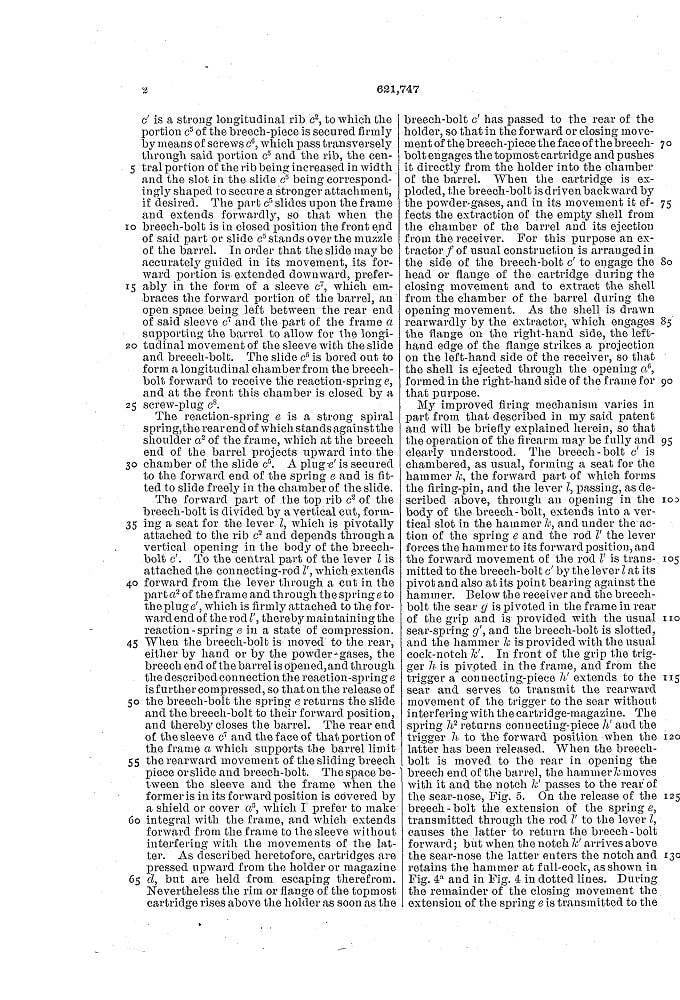 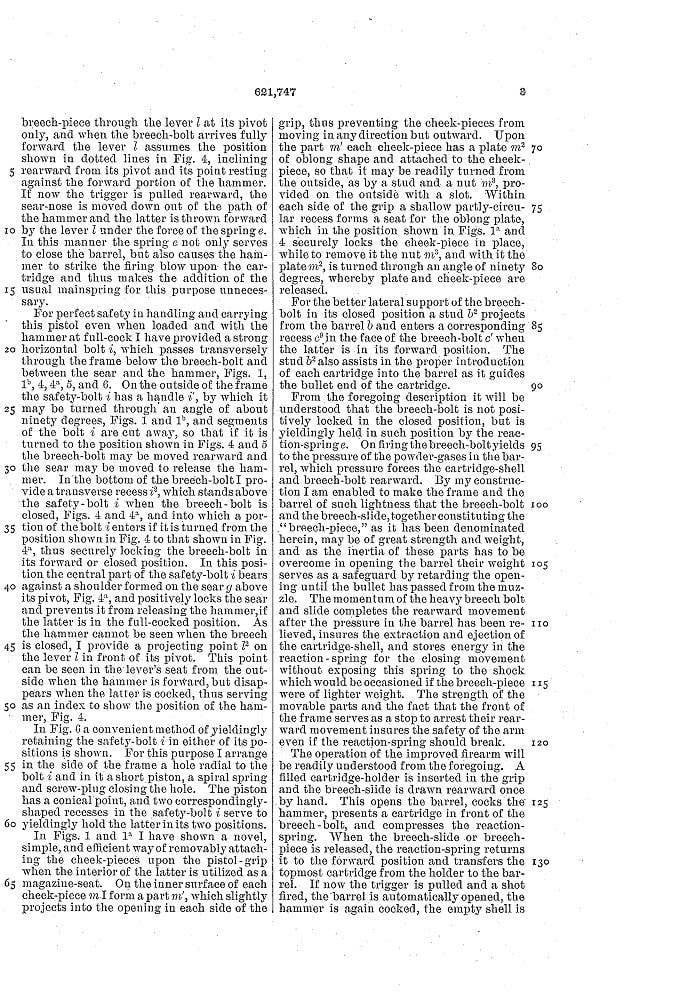 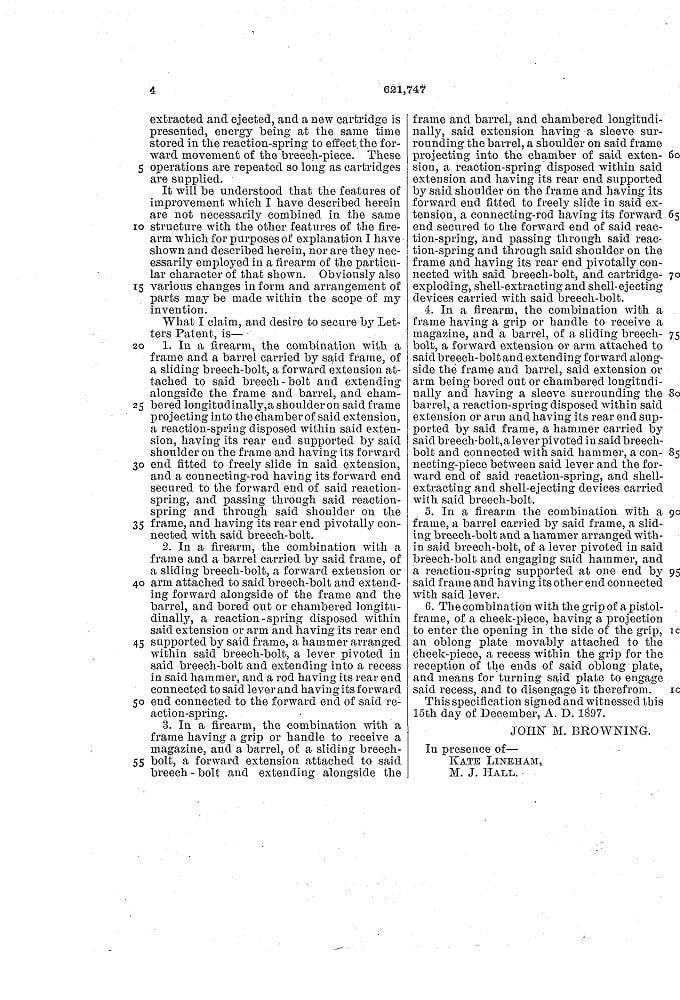 The original version of the gun was improved by J. Browning, and 29 patented April 1898 in Switzerland under the number 16896, and 21 March March 1899 of the year Browning received an American patent under the number XXNX. The designer significantly changed the trigger mechanism, the drummer replaced the trigger. 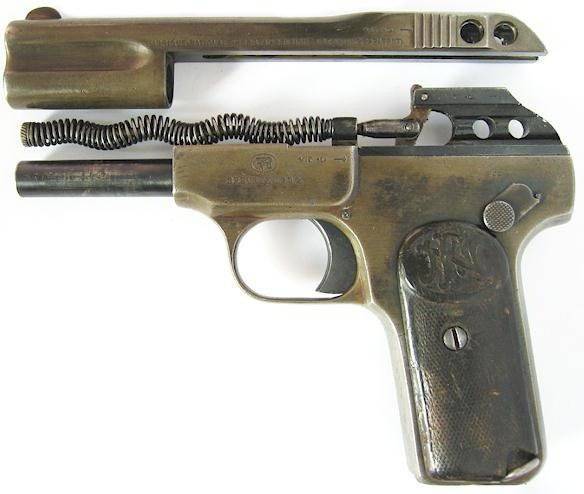 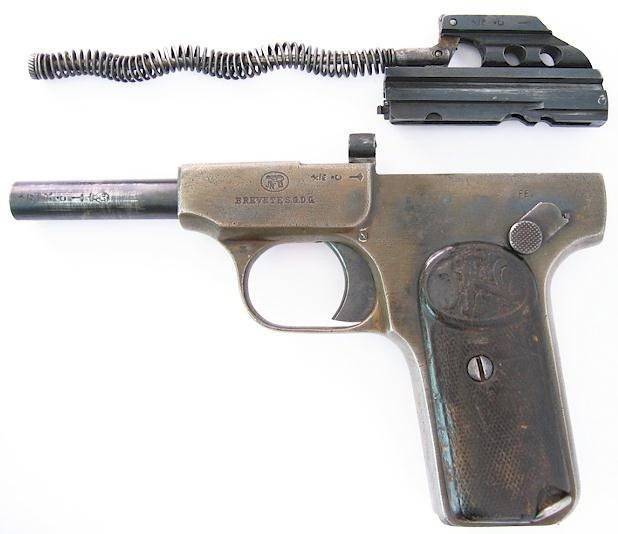 An interesting solution was to combine the functions of the combat and recoil in one piece. The spring located above the barrel worked in compression as returnable and as combat. 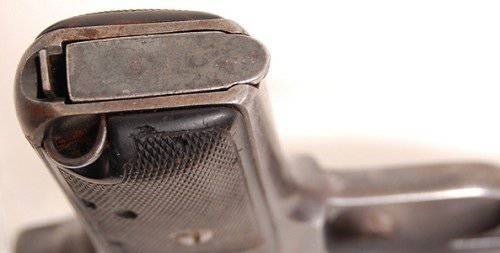 After the Belgian gunsmiths made a number of changes to the design of the sear and the magazine's latch, in January 1899, mass production of the pistol began. 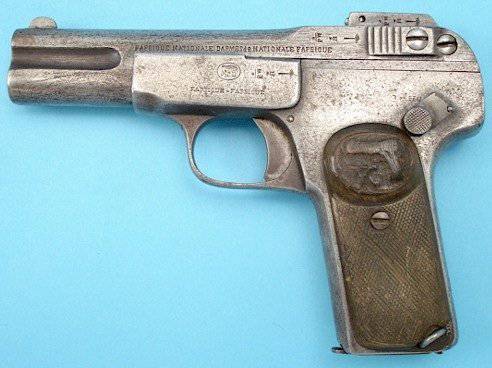 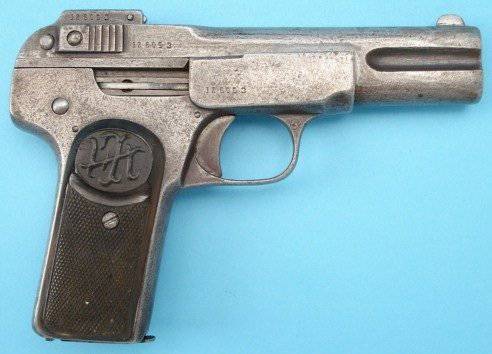 The Browning 1900 pistol (FN Browning model 1900) consists of a frame with a barrel fixed in it, a casing, parts of a firing mechanism, a safety device and a magazine. 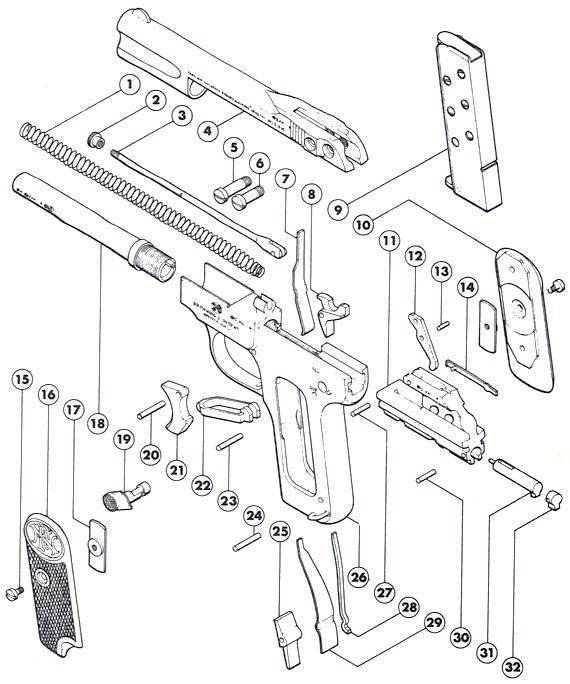 The shutter casing consists of two separate parts: the shutter and the casing, connected by means of two screws to the honey. Return-combat spring is located above the table in the housing-bolt. 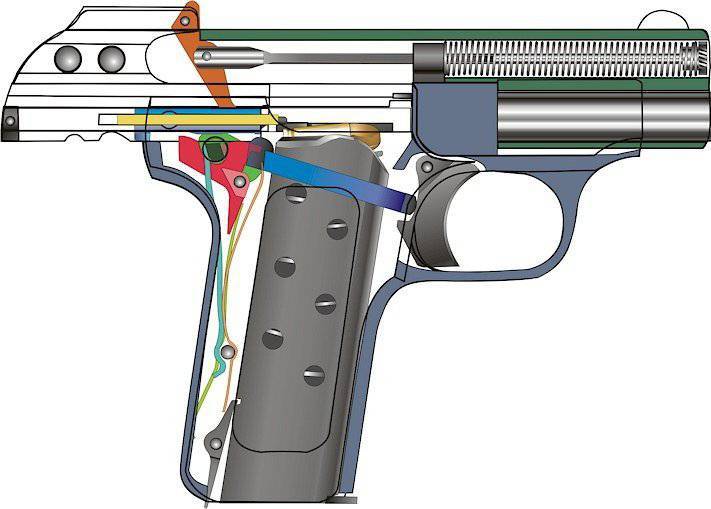 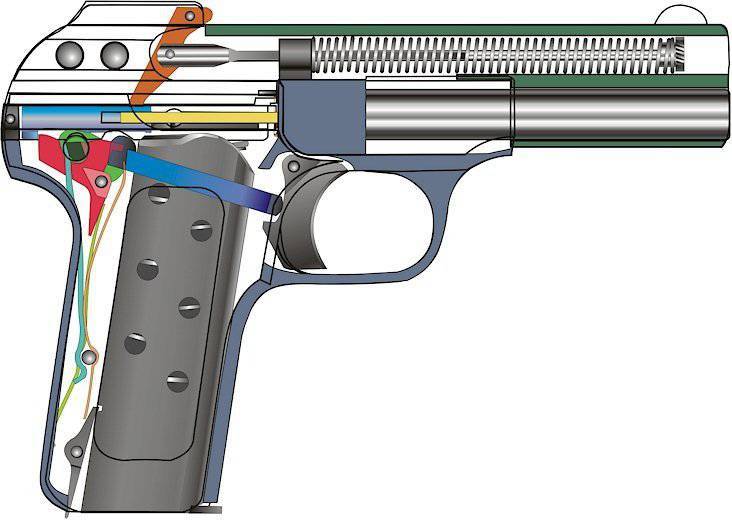 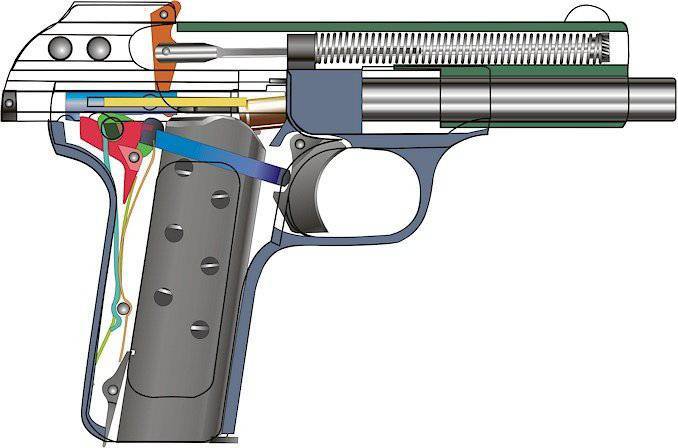 Weight and linear characteristics of the Browning 1900 pistol and its cartridge. 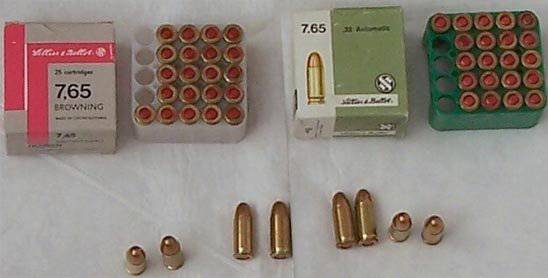 Caliber 7,65mm Browning cartridge. The sleeve with a cylindrical body is brass, has a groove. The bottom of the sleeve has a slightly larger diameter than the sleeve, in the bottom there is a cap of central ignition. Charge weight of smokeless powder 0,2 g; bullet weight in a nickel silver sheath 4,8 g, weight of a cartridge 7,6 g; chuck length 25 mm, sleeve length 17 mm, bullet length 11,7 mm, bullet diameter 7,85 mm. 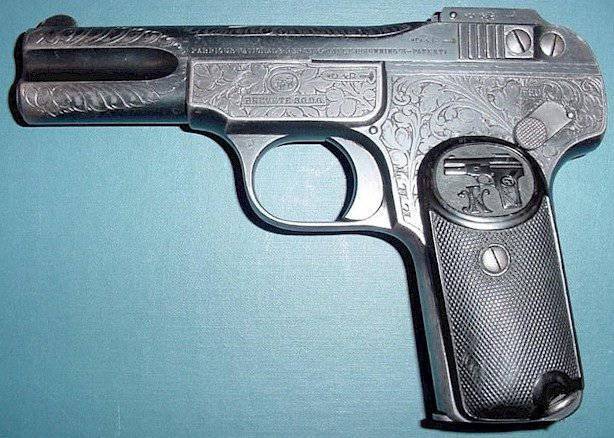 The length of the gun 163 mm, thickness 22 mm, height 115 mm. The length of the barrel is 102 mm (originally the gun was also produced with the barrel length of 122 mm). The bore of the weapon has an 6 right-angle thread. The weight of the gun with an empty magazine 625 g. The initial velocity of the bullet at the muzzle 270 m / s. Bullet piercing: on the 10, the bullet pierces the 4 pine boards of 25 mm each, set apart from one another at a distance of 25 mm. On 200, a bullet pierces two such boards. The bullet penetrates the 80 mm into the pine log. 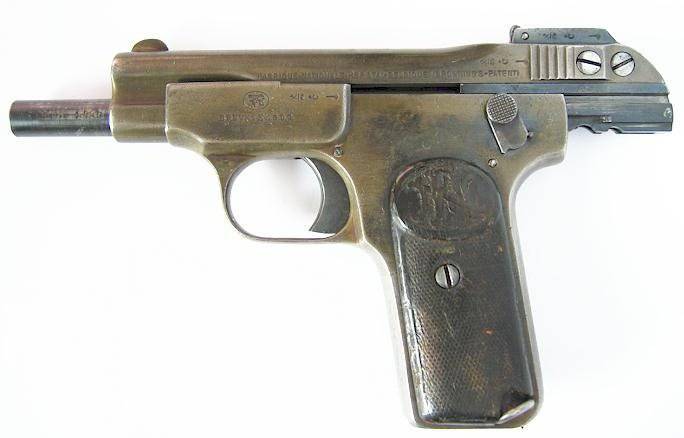 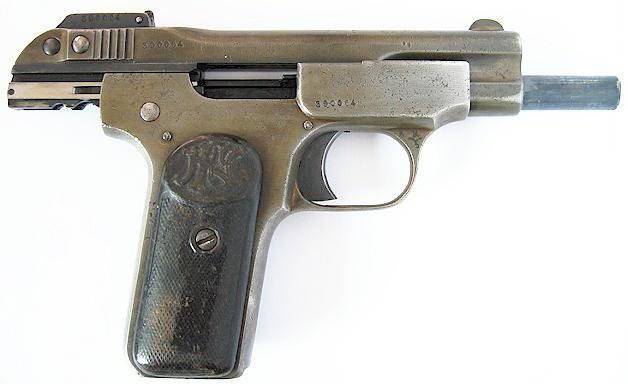 The Browning 1900 pistol (FN Browning model 1900) was already adopted by the Belgian army officers on June 3, 1900, from March 31, 1901, the Browning 1900 began to be used in the Belgian gendarmerie, and on May 6, 1901, the gun was adopted by non-commissioned officers and artillerymen. Soon the pistol entered service with the police of Norway, Finland, Denmark, Luxembourg and Croatia. The Browning 1900 pistol was also popular in Russia, where it was usually called Browning No. 1. The gun was allowed to be purchased privately by officers of the tsarist army and fleetIt was used by postal workers and gendarmerie. Browning 1900 received wider distribution around the world as a civilian weapon. 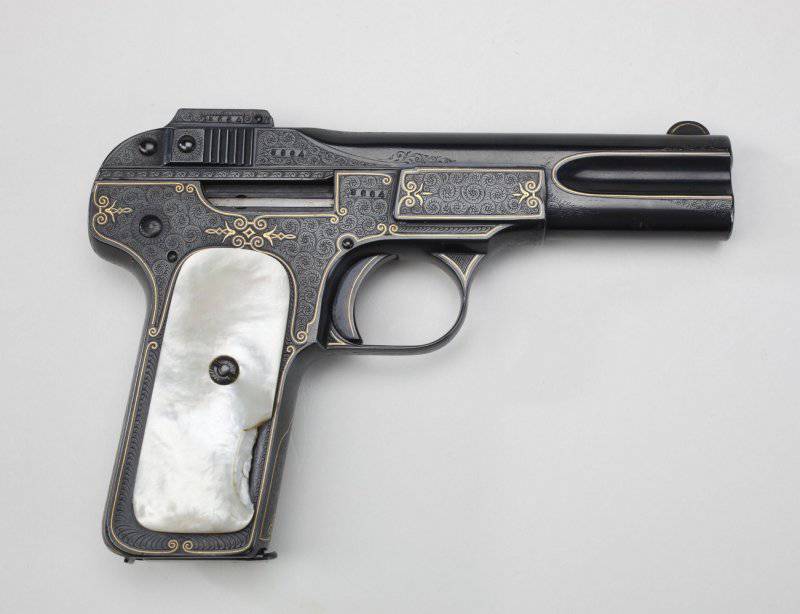 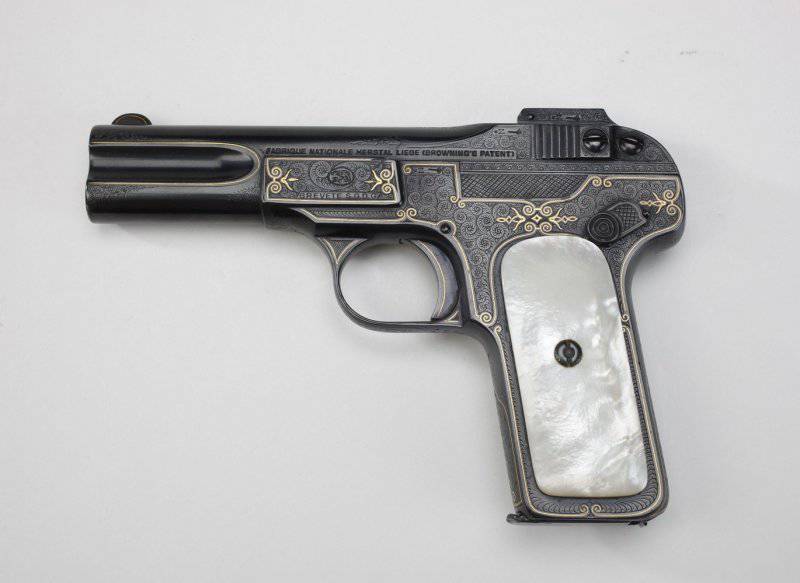 The weapons were produced with various finishes: ordinary and single-piece, which could have engravings of varying complexity, mother-of-pearl handles, gold-plated finishes, etc. 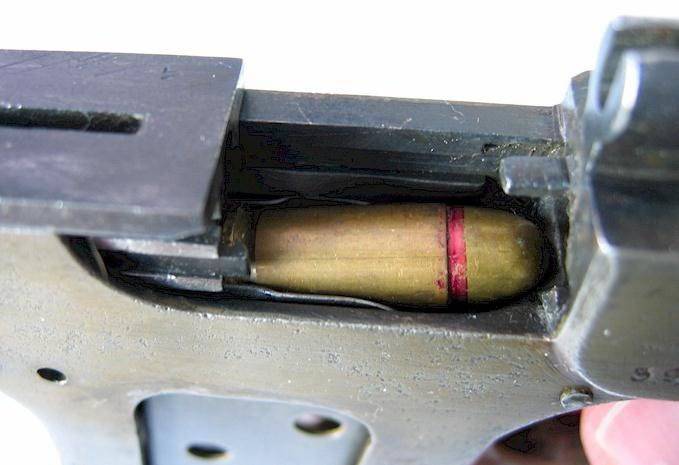 In addition to the significant advantages of the FN Browning model 1900, it still had several disadvantages. When worn with a cocked drummer, the reciprocating spring was quickly stretched and weakened. Insufficiently reliable fuse did not provide complete safety when carrying a pistol with a cartridge in the chamber. Due to the small stopping power of the 7,65 mm caliber bullet, it was necessary to shoot only vital organs in order to quickly defeat the enemy. The design of the 1900 model was not good enough even for that time, so the designer himself soon created a number of more advanced models of the 7,65 caliber and 9 mm and equipped with automatic fuses. 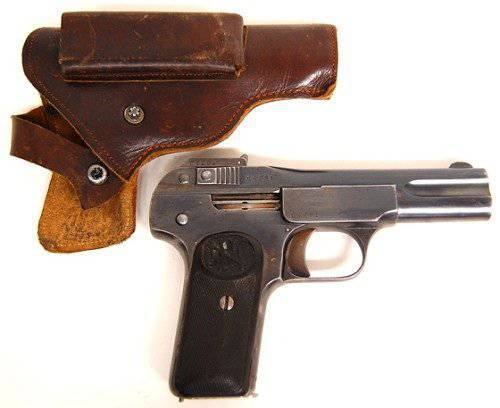 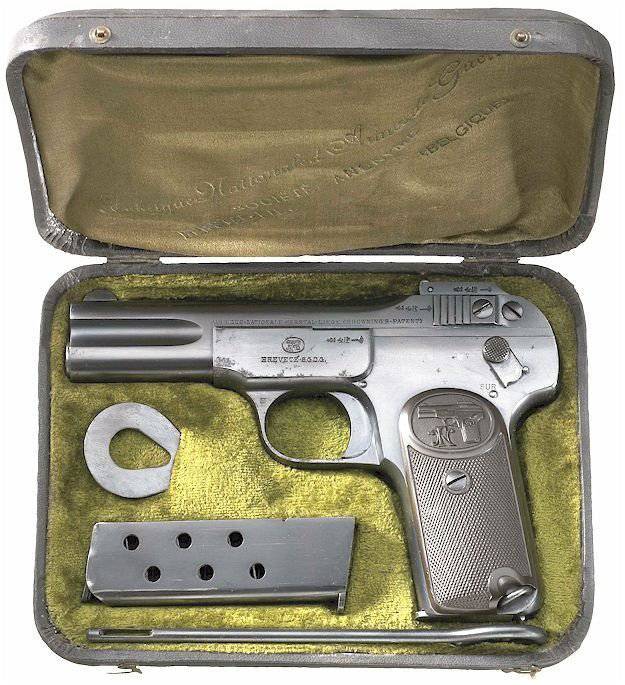 The huge popularity and demand of the pistol led to the fact that many private enterprises and small weapon workshops began to make copies of the 1900 model legally and not legally.