April 6 2011
15
One of the accusations that is constantly made against the USSR and Stalin is the "conquest" of the Baltic states and the territory of modern Moldova.

In this case, prosecutors miss a number of important facts, consciously or out of ignorance:

- In the autumn of 1939, Estonia, Latvia, and Lithuania themselves concluded an agreement of mutual understanding with the USSR, after which the Union received the right to deploy its military bases on their territories.

- In each of the countries, significant groups of the population supported the idea of ​​socialism, not small communist parties operated in them, newspapers were published. In the elections of July 1940, 92,8% who came to express their opinion voted for the “Union of Working People” in Estonia. In the Baltic countries, there were also “underground workers” from local people who were ready to defend the ideals of communism at the cost of their lives. 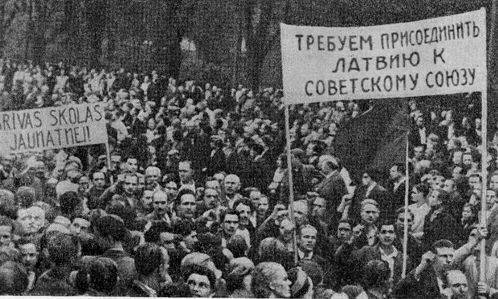 Riga residents meet the Soviet "occupiers" in the summer of 1940.

- In Lithuania, recalling the “occupation”, for some reason they don’t remember that Moscow returned their ancient capital to Lithuania - Vilna and the Vilno region, which Poland seized in 1923, Poland.

- Since “Sovietization” is equal to “occupation,” why the gallant armies of the Baltic countries did not offer resistance, which Western democracies would undoubtedly support. At least morally, precisely, perhaps even a war would have begun, because during the Soviet-Finnish war, London and Paris almost already started a war with Moscow. The Red Army "pumped up", too quickly won.

The armies of Estonia, Latvia, Lithuania simply “joined” the Red Army. In Lithuania, the army became the 29-m territorial corps, the military even retained the old form, only insignia was replaced. Political officers - commissioners, often Lithuanians from the inhabitants of the USSR or members of the Lithuanian Communist Party, added to the officers.

Why did the guerrilla movement against the "invaders" not start?
- There are lots of photos where residents of the three Baltic states meet Red Army men with flowers and bread and salt. That is, at least for a significant part of the population, the changes were met positively.

- Few modern politicians recognize that restoring the integrity of the Empire was a positive development for the Russian people and for Estonians, Latvians, and Lithuanians, completely in their interests.

The USSR actually saved the Balts from the real occupation of the Third Reich. During the "occupation" of the Soviet Union from 1939 of the year to 1991, Estonia lost thousands of people from repressions of 5-7, another approximately 30 thousand were exiled, we will not go into details for what. The Germans killed 1941 thousands in Estonia from an incomplete 1944 year to 80 year, another 70 thousand fled from “civilizers”. In the incomplete 4 of the year, half of the industry was destroyed, almost all the livestock was selected, and agriculture was almost completely destroyed. And under the rule of the Soviet "occupiers" the Baltic States flourished, it was a "showcase of the USSR".

In Lithuania, during the Soviet era, thousands of people were repressed by 32 (to clarify, this does not mean that maybe they were exiled or planted for a year or two), the Nazis only physically killed 270 of thousands of Lithuanian citizens.

And if you recall the plans of Berlin (the plan “Ost” and other developments), then the inhabitants of the Baltic states were very fortunate that the Red Army won. All three nations were considered inferior and were part of the destruction, part of the eviction of the Urals, part of being servants of the new owners, this territory was going to repopulate the Germans (already had experience of the Teutonic and Livonian orders).

- Prosecutors do not take into account the logic of wartime. In Moscow, they were not stupid and knew that a terrible world war was coming. In peacetime, it is possible to allow artificial formations to exist, and during the war years it is a springboard. If you don’t take this territory by yourself, Berlin will take it, but you can’t pick it out from there - this is war. This is a terrible strategic defeat: after the collapse of the Russian Empire, we already lost vast territories, including Finland, Poland, and the western borders shifted to a threatened proximity to Leningrad and Moscow. The further Moscow succeeded in shifting the border to the west, the better, the more time it will be for mobilization.

Imagine for a moment, we did not take the Baltics, and Hitler took. In reality, the Wehrmacht approached Leningrad on September 6. 1941 of the year was already significantly "exhausted." There is nothing from Estonia to Leningrad - 120 km, if Army Group North had struck a blow from the Baltic States, how long would it take them to reach the second capital of the Union? Five days or ten? Yes, and the divisions would be fresh.

- We must not forget such a military-strategic aspect of the occupation of the Baltic states, and of Bessarabia, as human and economic resources. They were not fully used by the enemy. The Baltic countries put together 11 divisions, one cavalry brigade, two cavalry regiments, one tank brigade, one tank regiment, 12 artillery regiments. In wartime, the Baltic countries exhibited a total of more than 420 thousand soldiers. If Hitler occupied this territory, he would be able to use this force against the USSR. And so Berlin, in addition to the punishers, was able to form only three SS divisions in the Baltic. This despite the fact that 3 corps fought on our side: Estonian, Latvian and Lithuanian. Then, in view of their low combat readiness, new units were formed: the 130th Latvian Rifle Corps, the 8th Estonian Rifle Corps and the 16th Lithuanian Rifle Division. These units fought quite worthy. They participated in the liberation of the Baltic states in 1944-1945.

In addition, the Baltic fleet 4 submarines of Estonia and Latvia entered. And one of them, the Estonian Lembit, became the third most successful in the Soviet fleet, drowning 7 enemy ships and 17 transports. 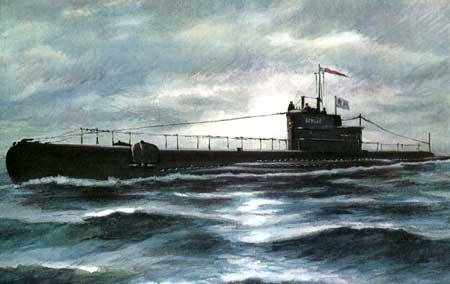 - About the attitude of the Moldovans themselves to the “occupation” of the USSR is the fact that they practically did not participate in the war on the side of the Nazis. But there are many Moldovans who honestly fought for the Soviet homeland.

- Moldova as a state and was not in stories. Moldova is part of the Russian Empire, which, when the Empire collapsed, was conquered by Romania. In Russia, no one recognized. Stalin simply demanded that Romania return its own, which Romania did.

- Moscow has also created the “germ” of the Moldovan statehood - the Moldavian SSR, having also slaughtered the territories of Little Russia, Transnistria.

- The life of Moldovans has only improved since returning to the empire. Modern Moldovans, probably, from a good life go to work in Russia, Romania, the countries of the European Union ?!

- Romania hostile to the USSR, besides seized its territory - Bessarabia. Bucharest was torn, with whom to be friends? With Paris and London or Berlin. As a result, he chose Berlin, he was not seen in the “throwing” of the allies, the example of Poland was before Romania. The USSR also solved a purely military-strategic task: as in the case of the Baltic states, it pushed the border to the west.

The political elite of the USSR acted as it should act for the normal leadership of the country in the conditions of the approach of the Great War. Moscow acted in the strategic and tactical interests of the state and its people. Moreover, in the interests of both the Baltic peoples and Moldovans, they only benefited from the "occupation" by Moscow, saving thousands of lives and receiving economic benefits. The USSR almost immediately began to invest heavily in the development of these territories of a common empire. 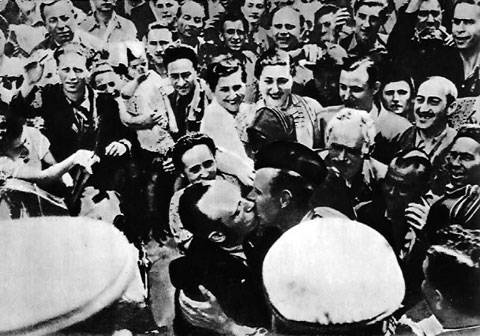 Kishinev. 28 June 1940 of the year, thousands of people took to the streets to meet the Red Army.