What should happen to Ukraine so that we will send troops. To the beginning of the sudden teachings 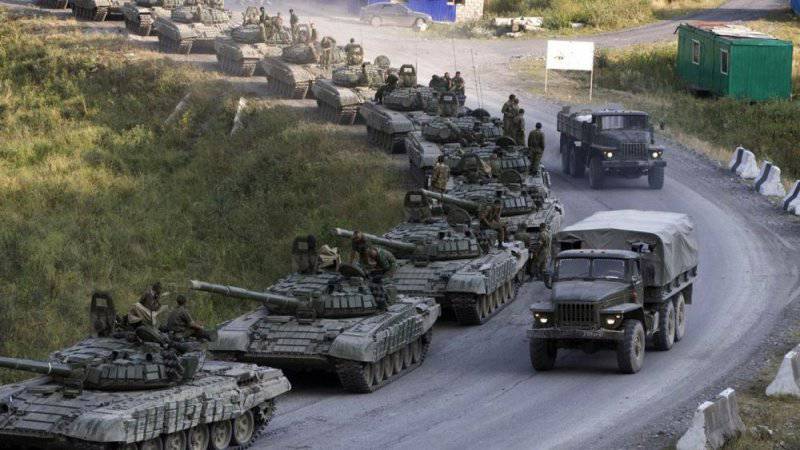 Russian Defense Minister Sergei Shoigu at a meeting of the Defense Ministry announced the launch of new large-scale operational-tactical exercises of the armed forces. They will also be a test of the combat readiness and ability of the troops to act in a certain operational environment. Recall that the difference between "sudden checks" and traditional exercises is that the command of the forces involved does not know in advance the plans of the exercises and gradually receives combat training tasks after they are given a high degree of combat readiness, just like in real combat operations.

First, we give some general information in order to assess the magnitude of the current exercises. The military units and formations of the Western and Central military districts (ZVO and CVO), the aerospace defense command, the command of the airborne troops, long-range and military transport will be involved aviation, forces and means of the Baltic and Northern Fleets. The exercises will involve more than 150 thousand military personnel, 90 aircraft, more than 120 helicopters, up to 870 tanks, more than 1,2 thousand units of military equipment, as well as up to 80 ships.

The exercises will be held from February 26 to March 3 in two stages. At the first stage, the attracted forces will be deployed to designated areas and deployed to remote combined arms and sea ranges. At the second stage, the 6th and 20th armies of the Western Military District, the 2nd Army of the Central Military District, formations and separate units of the Airborne Forces will carry out tasks within the framework of the general scenario of the exercises. Aerospace defense forces, fleet, long-range, transport, tactical and army aviation - they will work out the support for the actions of this group of forces.

Now about the main thing. About the conditions in which exercises are held and what tasks will be worked out.

Many will link this test of combat readiness of the troops with the events in Ukraine. Especially considering the fact that some of the forces will operate near the border with Ukraine. And such an assumption would be correct despite the obligatory official statements in such cases. That's just to treat them in the forehead - as the preparation or even the beginning of the "invasion of Ukraine" - is not worth it.

On the eve, some media outlets that noticed preparations for the exercise, managed to produce a sensation, saying that "Ulyanovsk paratroopers will be transferred to the Crimea after the Togliatti brigade of the GRU special forces, which are already there."

It is not true. Although the detachments of the 3-th OgbrSpN may at any moment be deployed to any foreign territory, and even more so to any Russian military installations, depending on operational necessity or on training plans. The combined brigade detachment even ensures the security of the Russian missions and missions in Afghanistan. Nevertheless, no "paratroopers" order to land in the Crimea have been reported. And that's why.

Bandera, who committed an armed coup in Kiev, love to frighten themselves, and all the people of Ukraine with the invasion of the Russian army. For them, such an invasion would even be desirable. And from a propaganda point of view: then they will be able to assert that all these years have not been delirious in reality, but “honestly warned.” And from an organizational point of view: a real adversary for rallying the ranks will be more useful than an endless search for "aunts" and "enemies of the national revolution" who soon threatens Bandera with a complete loss of trust even in the west of Ukraine. Especially in the face of the upcoming financial collapse.

As long as the “national revolution” has not yet gone bankrupt itself, both morally and in fact, it would be highly unwise to give the nationalists and their owners the most powerful informational and psychological trump card.

As an example, one can cite the text of a certain Lvov "officer" who argues for the newspaper Figaro about the invasion of the Russian armed forces. According to the "veteran of the armed forces", the Russian troops will occupy the Crimea, and then (!) Will break into the mainland of Ukraine through the narrow Perekop isthmus. The text is absolutely illiterate, both in terms of operational art, and in terms of sober view of reality. But on the other hand, he convinces the reader that Russia has a burning desire to conquer the freedom-loving Ukraine, and at the same time the undeniable success of the war with Russia.

This example is not a case of clinical cretinism, but a normal informational support for the fascist revolution. In Ukraine, the propaganda machine has been working for more than 20 for years, hammering people into Ukraine’s heads, like Russia is the enemy of Ukraine, and Russians and Ukrainians are completely alien to each other. And it is necessary to recognize that propaganda has a considerable result.

Let us set aside the sources and goals of this propaganda and talk only about the likelihood of the “invasion of liquidators”.

No, oddly enough, under certain circumstances (of which we will speak separately) - it is possible. But if Russian troops ever receive an order to enter Ukraine, it is not because we have “imperial ambitions”. And because otherwise it will be impossible.

But back to the beginning teachings. Any knowledgeable person knows that every operational-tactical exercise is the development of actions according to operational plans developed for specific circumstances. From this point of view, one can safely begin to frighten the rural residents of Ukraine with current exercises as a rehearsal of “aggression”.

The composition and nature of the forces involved speaks of working out fairly large operations in a wide theater of military operations, with large forces moving over long distances. As an adversary of such a group of troops, there can be either regular formations with serious air and sea support, or illegal armed formations (traditionally called “terrorists” in public documents).

Everyone is free to guess for which theater of war the plans of the current exercises are prepared. But Sergei Shoigu voiced the following:

"The Supreme Commander-in-Chief of Russia has been tasked with verifying the ability of troops to act in resolving crisis situations that pose a threat to the country's military security, as well as anti-terrorism, sanitary-epidemiological and man-made character ... Military personnel must be ready for action on unfamiliar training grounds ... The troops are also required to ensure safety weapons and ammunition.

In general, with certain assumptions, the officially announced information can also be interpreted as a preparation for the actions of Russian troops in Ukraine. Moreover, the operational plans of such actions - by definition - must be available. Bandera can safely begin to rally "in the face of threat."

However, it should be said that at present there are no sufficient reasons for any actions of the Russian armed forces in Ukraine. All Ukrainian mess and anarchy are an internal affair of Ukraine, which formally still retains the status of a state entity. And all this will remain the internal affair of Ukraine until: a) NATO appears in Ukraine; b) there is no real threat to Russian military facilities in the Crimea or Ukrainian nuclear facilities; c) the Nazis have not yet begun mass reprisals.

Separately, it should be said about the time of the "sudden test readiness." To see one of the main goals of the exercises, it’s enough to see what events take place far from Ukraine, but the consequences of which can have a serious meaning for it.

On Wednesday, a meeting of defense ministers of the countries participating in the North Atlantic Alliance was held. As you might guess, it discussed the situation in Ukraine. In other words, the NATO military bloc is already engaged in Ukraine, developing a plan of action at the level of military ministers. Thank God, that is not yet at the level of the heads of operational commands. Following the meeting, the NATO Secretary General Rasmussen made a number of interesting statements for journalists:

“Ukraine is a close partner of NATO, NATO is a sincere friend of Ukraine. We are ready to support Ukraine in its democratic reforms. ”

“The door to NATO remains open for Ukraine. The decision of the summit in Bucharest (April 2008 of the year) remains in force. We said that Ukraine (and Georgia) could one day become a member of NATO, if that is the will of its people. ”

Somewhat earlier there was information that the United States was sending an additional group of marines to Ukraine to guard diplomatic missions. As well as a group of "economic advisers" who should help someone in Ukraine (apparently, the Maidan, since there are no other institutions of state power) to cope with the crisis. Also today, a meeting of the NATO-Ukraine Commission will take place, where the decisions of “sincere friends of Ukraine” will be communicated to the military leadership of the “close partner”.

It is worth recalling that “sincere friends” not only provoked the current wave of chaos in Ukraine, but also, at least since 2004, trained militants of nationalist organizations in NATO training centers in Albania and Estonia. Some of them were trained quite legally, since they are officially listed as officers of the private security structures of the Ukrainian oligarchs. Well, minor fascists, apparently, went as part of some kind of “cultural exchanges”.

It is not difficult to understand that this vigorous activity of NATO on the territory of Ukraine is in direct contact with the issues of vital threats to the security of Russia. And if for various reasons the nationalists themselves cannot explain the consequences of participating in such activities, then their European and overseas supervisors simply need to explain in an intelligible form that Russia's patience does not mean passivity.

Yes, the teachings are directly related to the events in Ukraine. It will be indifferent for Russia whether someone will be inspired by the “close war with Muscovites” or will frighten. If the teachings can be considered a demonstration of some intentions and possibilities, then we demonstrate them not to those to whom the Western masters have prepared the role of cannon fodder. This is a demonstration for those who are able to draw conclusions. Using sports terminology, our Western "partners", who already play on the verge of a foul in Ukraine, have finally earned a yellow card. And very, very yellow. Very, very intelligible and accessible to understand them.

So far, Ukrainian oligarchs and Nazis can play many of their children's games, taking advantage of the status of an independent state. But there is an edge of the sandbox, for which they can not go. There are situations in which Russia will stop at nothing. And this is not “imperial ambition” and not even an emotional desire to help compatriots. This is the usual healthy pragmatism.

Ctrl Enter
Noticed oshЫbku Highlight text and press. Ctrl + Enter
We are
Completed a surprise check of the troops of the Central Military DistrictSudden inspection of troops of ZVO and TsVO, Northern and Baltic fleets
Military Reviewin Yandex News
Military Reviewin Google News
452 comments
Information
Dear reader, to leave comments on the publication, you must sign in.