Oleg Tsarev: "It is necessary to keep the interim government in Kiev from the use of force against civilians" 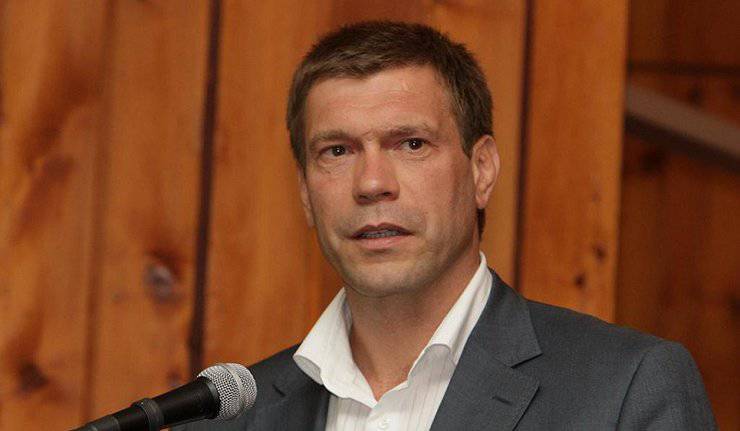 Deputy of the Verkhovna Rada of Ukraine from the Party of Regions Oleh Tsaryov told the Voice of Russia how much legitimate the new government of Ukraine should be considered, who holds power in the regions of the country and how ordinary people feel

Ilyashenko: Hello, dear listeners. On the latest events in Ukraine, we are talking with the deputy of the Verkhovna Rada of Ukraine from the Party of Regions, Oleg Tsarev. How can you assess the level of legitimacy of the new Ukrainian government?

Tsarev: It is highly doubtful. We have only four reasons that lead to the resignation of the president - his own statement, impeachment, death and illness. But none of these four reasons.

Ilyashenko: Does this government really have powerful levers? Is it able to overcome the crisis in Ukraine?

Tsarev: After they dismissed law enforcement officers who defended the authorities, the authorities themselves can no longer protect themselves. Why is the cabinet claim on the Maidan? Because other power verticals do not exist. The first function of the state is to protect citizens.
Now the state practically does not fulfill this function. Police demoralized. In the streets walking armed people in masks. Now every robber can put on a mask, pick up a machine gun and say that he is a supporter of Euromaidan, and not a single policeman will obstruct him.
All this makes the situation in Ukraine quite serious and difficult. We have a semi-legal government, there is no control and law and order, there is no systematic work of law enforcement agencies, incomprehensible cordons on roads that are incomprehensible people and, based on incomprehensible criteria, they let someone through, and others don’t, check the cars. All this is not good and can lead to very negative scenarios.

Ilyashenko: Who holds power in the regions of Ukraine?

Tsarev: On the one hand, it is carried out by local councils. On the other hand, the regions are complaining. I constantly communicate with my colleagues from different regions, they say that armed people come, bring some mandates, it is not clear who has been signed, and no one puts obstacles. They enter state buildings, give commands. Here is such a chaos.

Ilyashenko: How do you assess the idea of ​​federalization of Ukraine?

Tsarev: Federalization is a means. We must talk about the ultimate goals. We want to live in a single state, we want there to be no devastation, that there is civil peace and tranquility. And the methods that can lead to this result may be different, including federalization.

Ilyashenko: How do you assess the economic situation in Ukraine?

Tsarev: The situation is very complicated. We are in a pre-default condition. Here the events influenced the Independence, in the center of Kiev. The revolutionary situation could not affect the economic situation.

We have armed people on the streets. If they stop paying salaries to state employees, pensions, including benefits to Afghans (who act with the Right Sector on the Maidan), these armed people can engage in looting. Now these facts take place - both looting and robbery, but they are not of mass character. In the event of a continuing crisis, given the number weaponsarmed men, this all can lead to massive robberies.

Aggravates the situation and the semi-legitimacy of the government. For example, in Kosovo, where there was no legitimate government, NATO countries could not lend, provided only material assistance. Such a government can only take aid, but cannot sign loans. Everyone understands that there will be issues with a refund if the government is half-legitimate.

Ilyashenko: Now the situation in the Crimea is in the center of attention. Can you comment on what is happening there?

Tsarev: About the same thing happens as on Independence a couple of months ago. Peaceful protests, although a woman has already died as a result. This is very bad, but, nevertheless, it is necessary to understand that everything must be done so that the militants who are armed with seized weapons do not go to the south-east of Ukraine so that civil clashes do not start. We must keep our provisional government in Kiev from the use of force to civilians.

Ilyashenko: Is it realistic to choose the legitimate president of 25 in May? Is there enough political will for this? Most importantly, are there any real candidates for this post?

Tsarev: There is no exact means. As for forces, we already hear statements that the armed Maidan will not disperse, that it will control the elections. It turns out that the elections will take place at the point of the guns. Looking at the radicalism of the actions and statements of representatives of the Maidan, I think that it will be at least unsafe to participate in these elections for candidates who will not reflect the point of view of the Maidan.

Ilyashenko: How does the population of eastern Ukraine react to what is happening?

Tsarev: The population of the south-east of Ukraine is unorganized. Protests on Independence seriously prepared for many years, and all operations took place according to a plan that was prepared for March, but due to the non-signing of an association agreement, it was launched earlier. Nevertheless, these plans were anyway, non-governmental organizations were very actively involved in them.

In the southeast, this is not. But now there are a lot of spontaneous protests, for example, around monuments that they are trying to dismantle. People specifically take to the streets, arrange duty. Unfortunately, the Party of Regions in the main part expressed support for the current parliament, votes for the government, and there is practically no political force that could unite and head these protests.

Ilyashenko: What kind of support is needed from Russia?

Tsarev: First of all, diplomatic. It is necessary to do everything so that against some people in the south-east of Ukraine, the militants, armed in the literal sense of the word, as well as armed with anti-Soviet and anti-Russian ideology, are not involved. We must protect the people.

Ctrl Enter
Noticed oshЫbku Highlight text and press. Ctrl + Enter
We are
A great interview with Sergey Lavrov: about Ukraine, Obama and IranIn the program "Rise" Sergey Dorenko talked with the ex-Minister of Defense of the DPR Igor Strelkov
Military Reviewin Yandex News
Military Reviewin Google News
56 comments
Information
Dear reader, to leave comments on the publication, you must sign in.