Crimean Tatars are asked to help in the battle with Bandera 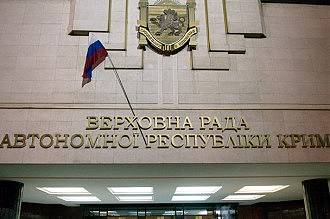 Crimea desperately fights with the "Bandera evil." “Word for Russia. If the Russian Federation does not want to finally and completely lose fraternal Ukraine as a friendly country, if it wants to get the NATO border near Smolensk, let it sit and watch how Crimeans try to sweep away this Bandera evil that is fully funded and armed with cold pragmatists from Washington and Brussels . But our resources are not enough, ”a well-known Crimean public figure, politician Vasvi Abduraimov told IslamNews.


- Vasvi Enanovich, how do you assess the results of yesterday’s confrontation with the Crimean parliament? There is a lot of information that the Russians and Tatars are divided, the first - for the breakaway of the Crimea from Ukraine, the second - for Euromaidan, with all the consequences ... Is this true? Who actually support the Crimean Tatars?

- Due to the fact that it was planned to hold an extraordinary session of the Verkhovna Rada of autonomy, which was to decide the main question about the attitude towards those who seized power in Kiev today, two gatherings were held. On the one hand, it was carried out by activists of the Mejlis, they are outspoken supporters of Euro-Atlantic integration, Euromaidan and the new Kiev “government”, who, for their faithful service, expect to receive their share of posts at all levels. They were actively opposed by the Russian-cultural part of the population, not only the Russians, but also the Crimean Tatars, who announced a new course for building the Crimea together, living in the Crimea, and defending the Crimea. They came to support all the proposed decisions and morally support the Crimean Parliament. Passions ran high, there were clashes, but it did not come down to serious bloodshed. And in the midst of this conflict on the square, it was reported that the meeting could not be opened due to the lack of a quorum. Of the 100 deputies registered 49. The quorum did not happen, the session did not hold. And it was pompously announced as a great achievement of those people who came to prevent separatism and so on.

To make it clear who represented the militants of the Mejlis: the active part of this organization representing Simferopol and Simferopol region is about 3-5 thousand people, but more than half of them are adherents and activists of Hizb ut-Tahrir. Our representatives also suffered in these small clashes. It turns out that against the unification of the Russian people with the Crimean Tatars, with other ethnic communities, for the benefit of the future Crimea, the Mejlis activists, open guides of the Euro-Atlantic course among the Crimean Tatars, and adherents of Hizb ut-Tahrir, who are also fierce, support integration in the Eurasian direction. confronting all Russian and Russian. In what way they closed up.

- Hizb ut-Tahrir recently behave more actively in the Crimea than before?

- They, starting from last year, switched to active actions and began to hold rather large organized meetings - in support of the Syrian rebels, to send a new batch of suicide bombers there. There were other events. The last time in the fall was an attempt to hold a big rally on Lenin Square, in the presence of their foreign curators from England, from other parts of the world. But at that time, the authorities had enough sense (including, under the pressure of the Crimean Tatar public) to prevent them from holding such actions. But now, when there is anarchy in Ukraine, they are united in the struggle against everything that concerns our desire to be together with the fraternal peoples of Russia, Eurasia, and so on.

- That is, speaking of the fact that all the Crimean Tatars are for Euromaidan, the media are far from objectivity?

- This is my subjective assessment, but the picture is folded next (and this picture is deliberately pumped so that later there is an opportunity to play a bloody interethnic and interfaith conflict): all the media draw that absolutely all Crimean Tatars are for Europe, for Euromaidan, and the rest of Crimea against, for Russia. But this is an absolutely erroneous opinion. According to my estimates, 97% of Crimeans against Euromaidan and that lawlessness, that Makhnovshchina and Bandera, which is now overwhelming the whole of Ukraine. “For” - 2-3% of absolutely non-ideal, paid by all sorts of foreign funds, working out their penny figures of NGOs.

- So how many Tatars in Crimea really support those and those?

- The Majlis, which, according to the 2012 election data of the year, was supported by 18% of the Crimean Tatar population, stands for Euromaidan.

- Yes, such is the real figure. The Mejlis is quite an influential organization, their 23 of the year was fostered here. But if at the beginning of 1990-x this support was 90%, today - 18%. These 18-20% Crimean Tatars may support Euromaidan, 60-70% are apolitical and deal exclusively with the survival and maintenance of their families, because from different starting conditions they began to live in the Crimea, unlike everyone else, and somewhere 10-15% is active against Euromaidan.

- Are Crimeans waiting for more active Russian intervention in the current conflict?

- From 80 to 95% - for Russia, for the return of the Crimea to the Russian Federation. This is open data of various kinds of surveys conducted on the peninsula. I would not want to give advice to the President, the government and deputies of the Russian Federation, it would be incorrect, but there is every reason to return the Crimea to 1945 status of the year, when the Crimean Autonomous Soviet Socialist Republic was illegally eliminated, and from that to dance further. This is one of the ways. There are other arguments, including the legally insignificant act of transferring Crimea from the Russian Federation to the Ukrainian SSR from 1954. Here we just need political will. And strategists who are able to flawlessly develop both legal and other aspects can offer a lot of practical solutions to the issue.

- Opponents of this point of view appeal to the fact that Russia, being limited by international legal norms, cannot engage in self-government on the territory of an independent state, which Ukraine is still today!

- True? Do you know what explains longevity and such a tough manifestation of the political will of the Maidan? Do you know what? Weekly (and this is an absolutely proven and reliable fact), through the US embassy, ​​there was funding for this operation from 20 to 30 million dollars, weekly, do you understand? Then this will manifests itself, among other things. There would be an opportunity to hold a referendum - and this is the most democratic manifestation of the political will of the population - 70% of the population of all Ukraine would have long advocated the closest integration with the Russian Federation. But nobody will hold such a referendum, do you understand?

- This is the question of a referendum, at least at the Crimean level, to be put on Wednesday ... So what?

- Yes, but the fact is that the deputy corps that has been forming all these years, the ruling elites of the regions, corrupted by a system of total corruption that has corrupted the entire Ukrainian power body, they did not allow the current composition of the Verkhovna Rada of Crimea to accept historical solutions and return the peninsula to its natural state. And this is also a big trouble. And therefore, we, the Crimean population, have only one chance - to repeat the experience of the Maidan in Crimea, which was successful. But if you go this way, in Crimea it can overlap not only with the political confrontation: an interethnic, interfaith card will also be skillfully played. And you know that conflicts on this basis are practically insoluble. And this is forever. This is a collapse with unpredictable consequences.

- If no serious measures are taken not only from the Crimea within two or three days, the forecast is pessimistic. The internal resources of the Crimea to show this will alone is not enough. If there is appropriate support, solutions, then, of course, all this will be supported and decided from below! Word for Russia. And how you wanted! If the Russian Federation does not want to finally and completely lose fraternal Ukraine as a friendly country, if it wants to get the NATO border near Smolensk, let it sit and watch how Crimeans without your support try to sweep away this Bandera evil, which is fully funded and armed with cold pragmatists from Washington and Brussels. So tell me - we are giving Ukraine at the mercy of Uncle Sam. And there will be a humanitarian catastrophe. Millions of 10-15 Russian-cultural people will be pulled to the Russian Federation, and they will come there with a great sense of resentment towards the country that threw them in a difficult moment. Can you imagine what a great potential it will be for all kinds of opposition forces like Navalny? And you will get the same Euromaidan and the same Ukraine throughout the whole of Russia. And the fact that there are thin places that can easily tear, fact. If such a prospect suits the leaders of the Russian Federation - let them do nothing. Let Ukraine then die with us.

I repeat, we just need political will to return the status of Crimea to 1945, to restore the Crimean Autonomous Soviet Socialist Republic as part of the Russian Federation, to appoint an interim head of the new Crimean Republic, with a timeline for developing a new constitution, etc. and everything went, despite all the howl that will occur in the West. Headache based on the Black Sea will be resolved fleet, forever and ever. And then, following the example of Crimea, all of eastern Ukraine will finally rise and begin to restore a normal system of power throughout the country.

- If America so generously spent on the Maidan, why she does not give money to Ukraine now?

- Why does America need a strong Ukraine? She needs chaos in Ukraine, completely subordinated Ukraine, completely controlled both politically and financially. If we lose Ukraine now, in half a year it will become a member of NATO and the EU. And as soon as this happens, Moldova, Georgia, Azerbaijan will be immediately absorbed ...

Your sovereign can do anything. It's time to act. And where it was necessary to show the will, it was manifested - South Ossetia, Abkhazia ...

- But Russia cannot accept them ...

- Because they have never been part of Russia. And the Crimea was!

Ctrl Enter
Noticed oshЫbku Highlight text and press. Ctrl + Enter
We are
A great interview with Sergey Lavrov: about Ukraine, Obama and IranWhat you didn't want to know about England
Military Reviewin Yandex News
Military Reviewin Google News
77 comments
Information
Dear reader, to leave comments on the publication, you must sign in.