Gas redistribution of the world: why Russia proroll to China 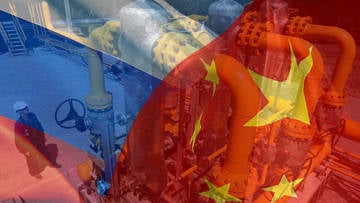 In May, during Vladimir Putin’s visit to the PRC, a Russian-Chinese agreement on gas supply is expected, finally containing the price formula. Then only real preparation of the project can begin. This signing has been postponed more than once, but this time the likelihood that a compromise will be reached is great. We traditionally try to keep track of the plot. news and changes in the positions of the parties. What has changed since our last comment on this?


Sakhalin gas China will not get yet ...

At the end of last week, the media, at the suggestion of the newspaper Vedomosti, discussed the news - a major discovery of oil deposits in the Yuzhno-Kirinskoye field (the Sakhalin-3 project developed by Gazprom). Previously, the field was considered predominantly gas, and the reserves from it were to go to the first line for liquefying the Vladivostok LNG plant, and also, mixing with Yakut and Irkutsk gas, and through the pipeline to China. Gas reserves were also increased compared with earlier estimates, but only slightly.

The emergence of such large oil reserves is a great success. The reserves are estimated at the level of 464 million tons - a little less than the annual production of our entire country. There were no such major discoveries at all.

Nevertheless, the discovery of oil reserves will inevitably make changes to the production strategy at the Yuzhno-Kirinskoye field: in order to extract energy resources as much as possible, you first need to start producing oil reserves and only after some time it will be possible to return to gas. This means that the launch of the Vladivostok LNG project may be postponed for several years.

There are no special problems. From a financial point of view, this option is even better - oil is much easier to transport, and revenues to the budget will be higher than in the case of prime gas production. And the gas - it will not go anywhere, will remain for the future.

And for our talks with China on the supply of pipe gas - this is also an additional plus.

First, with such a development in the coming years, less LNG will appear on the Asian market (compared to the possible launch of Vladivostok LNG), competition for LNG on the market will increase, and prices will rise. Accordingly, China will be more interested in Russian pipeline gas.

Secondly, as we have already noted, part of the gas from Yuzhno-Kirinskiy could go into the Chinese pipe, and this would be the most “quick” gas that would come to China, both in terms of the speed of gas pipeline construction and the pace of field development.

It will be more difficult with Kovykta (Irkutsk Region) and Chayanda (Yakutia), which means that if China really wants to get gas in a reasonable time, the PRC simply does not have time to stretch the negotiations.

Another positive point: we have already noted that it is a pity to send gas from Sakhalin to China via a pipe - it is better to let it run on LNG. If the development of gas reserves of Yuzhno-Kirinsky is postponed, then it will be so.

In the "minus" for the new version of the development of the field - a later exit of gas from Vladivostok LNG to the market. According to some forecasts, after 2020, there will be enough liquefied gas on the market, contract prices may decline. But this is just one of the versions. In the US, there is still no progress with the construction of new liquefaction plants, and Asian demand may be generally underestimated.

... and South Korea also claims to East Siberian gas intended for the PRC

At the same time, the Russian side began to "troll" China on the subject of pipeline supplies to South Korea - through the territory of the PRC. Recall that pipeline supply projects to the Republic of Korea (the LNG country is already buying from us) have been discussed repeatedly: options for an undersea gas pipeline (it turns out expensive), and pipes through the DPRK (very risky) were considered. And now the third option is being discussed again - through the territory of the PRC.

Moreover, for these purposes, Irkutsk gas (Kovykta), which, as Beijing believed, is not going anywhere, can be used (to bring it to Vladivostok and to liquefy it too expensive). Of course, China is not enthusiastic about this idea and will in every possible way slow down the possible construction of a gas pipeline through its territory.

But to do this, saving the face, will not be so easy, because right now there are prospects for improving relations between the PRC and the ROK and the latter’s departure from American influence. Against such a background, demonstratively taking an anti-Korean stance on this issue will be more difficult for China.

At the same time, relations with South Korea and Russia are improving. Recall that it was Korea that was largely devoted to the fall Asian visit of Vladimir Putin, which we have already written about.

There is not only a buildup of gas exports (and if Korea reduces the share of nuclear power plants in its power generation, it will need significant additional gas volumes). More importantly - the planned joint construction of tankers for LNG and other vessels for oil and gas production, joint projects on shipbuilding capacities - both in the territory of the Republic of Kazakhstan and in Russia.

Ctrl Enter
Noticed oshЫbku Highlight text and press. Ctrl + Enter
We are
Interest MatrixQatari gas will not beat off either Russia or Asia from Russia
Military Reviewin Yandex News
Military Reviewin Google News
41 comment
Information
Dear reader, to leave comments on the publication, you must sign in.