A terrible choice of Ukraine. Why Dmitry Yarosh is the president she deserves 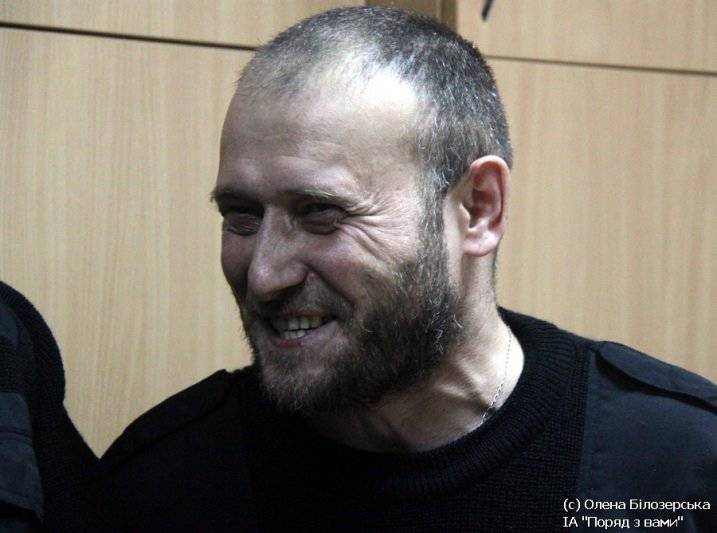 Ukraine has announced early presidential elections. Russia, through the mouths of its deputies, stated that it still considers Viktor Yanukovych the legitimate head of the neighboring state, but it is clear that the new authorities will not stop it: it is important for them to consolidate the results of the coup.

There are already the first candidates - boxer Klitschko and Kharkiv governor Dobkin. Everyone is waiting for Yulia Tymoshenko to announce her decision.

But in fact, only one person can be a worthy head of today's Ukraine. This is the head of the "Right Sector" Dmitry Yarosh. Of course, he is an enemy of Russia and a carrier of a clearly pro-fascist ideology, who also adheres to the war criminal Stepan Bandera. Yes, he caused serious damage to the interests of Russia and Ukraine. But at the same time, Dmitry Yarosh is the only political leader in Ukraine today who has the right to be president of Ukraine.

It is unlikely that most Ukrainians share his beliefs. But this is the most and did not think to stand up for Yanukovych, when he was overthrown.

It is necessary to understand that Yanukovych was not overthrown by the Maidan, not by Klitschko, not by Yatsenyuk, not by Tymoshenko, and not even by the burdens. Each of them, in actual fact, was quite ready to make peace with Yanukovych and stop the fight, bargaining for something for himself.

They did not give up precisely because Yarosh did not allow them to do this. He was the defensive squad that showed politicians ready to flee: “Not one step back. For retreat, execution. ” He was able to create and organize an army and showed skill and will in guiding her.

His ideas are certainly criminal and unacceptable. But the worst thing is that such ideas inspired those who were ready to fight for power in Ukraine. He was also ready to fight "Berkut", but he was betrayed. If Yarosh shows a minimum of foresight, he will demand amnesty and immunity for those who fought against him in the squares and, one way or another, will thereby make them a kind of supporters.

Because those who are able to fight to the end deserve respect, and, on the contrary, those who demand “stop bloodshed”, “respect human rights”, “reach consensus” are unworthy, that is, they propose not to fight for their ideas, but to betray them . Because ideas are ideas only when they are ready to die for them. An idea is something that can move a person, push him to certain decisive actions, and not his beautiful words.

A person who can fight and die for an idea is a person. Unable - an animal. Ideas can be insane and wild, but better a person who has the wildest idea, for which, perhaps, it needs to be destroyed, than an animal that has no idea and ready to obediently go to the stall for one or another ideological "shepherd".

Why did the nazis shoot and did not capture commissars and political workers? Because they knew that they were “ideological” and could not be bought and re-enlisted. To send such a person to a concentration camp is to give the prisoners a leader who organizes their resistance and rebellion.

It is necessary to recognize the obvious: Yarosh today is the most sane, worthy and effective leader in Ukraine, because he is able to fight for his ideas and serve them, and not speculate with them.

Yarosh - a vandal, demolishing monuments to Lenin. But at the same time, tactically, in his struggle with the authorities (by the way, no less bourgeois than the authorities in Russia before 1917), he acted exactly as Lenin would have acted in his place: direct pressure from the masses, contempt for political demagogy, so that “every day, let us achieve a small, but success”, “a decisive preponderance of forces in the decisive place at the decisive hour”.

It is strange and pitiful that he swore not to the red banner of freedom, but to the red-black banner of banditry. But the fact remains that the Bandera damned by the communists were able to prove themselves in the latest events in Ukraine, and the communists who curse them did not play any role at all.

The politician is not the one who allows the waves and the wind of politics to carry themselves in the chaotic Brownian movement, but the one who subordinates the development of events to himself and directs their course.

The power in Ukraine won Yarosh. But he won it for those who are not worth the price paid for this power. Yatsenyuk, Klitschko, Turchinov, Tymoshenko and Tyagnibok are no better than Yanukovych and are no different from him.

Why “Yarosh” was needed by Yarosh — it is clear, as is clear, and why they still need him today. But now he begins to disturb them. But why they Yarosh after winning them - it is not at all clear. Either they agree to do his will and the will of his troops, or he will destroy them, or they will destroy him.

Yarosh won power in Ukraine, and only he has the right to power today. What it will bring Ukraine to - even scary to think. But Ukraine itself made its choice. Yarosh has the right to rule her, the leaders of the “opposition” do not. And they know it. Trapped in both they and he.

Logically, the Rada must include Yarosh himself or his representatives in the government. But the posts of the second level will not interest them, and to give them the positions of the first plan will be for Rada tantamount to suicide. It is no secret that many are unhappy that the parliament is going to stay up to the end of its powers (and this is 2017 year), and, having obtained power, Yarosh will almost certainly use it to disperse the Rada. And there is no doubt that society will take it with a bang.

Not to include Yarosh or his representatives in the government in general means, at best, to give Yarosh the opportunity to declare his right to supervise the government, at worst, to give him the opportunity not to recognize him at all. Consequently, either Yarosh will turn his troops into the “corps of Ukrainian Revolution Guards” standing above the power, or simply will not recognize the government and create its parallel power structure, relying, for example, on regional “Maidans”.

And given that Ukraine is threatened with default and a social catastrophe, and the Batkivshchyna government will not be able to do anything real in the economy (they have already destroyed the growing Ukrainian economy left by Kuchma and Yanukovych after 2004) in their time, Yarosh will only have to aggregate the growing discontent , explain the catastrophe by the fact that parliamentary leaders “betrayed the revolution”, and insist on “defending its ideals”, demanding its continuation and deepening.

For opponents of Yanukovych, Yarosh today is much worse than Yanukovych himself (maybe that's why they don’t look for him too much?). It is dangerous for them and does not need them. And they will try to destroy or neutralize it. Although only he is entitled to be president of Ukraine today.

Yarosh, of course, the enemy. But it is more pleasant (and more understandable) to have such an enemy than such an ally as Yanukovych or Simonenko.