March 3 2014
14
Soon, in three months, elections to the European Parliament will be held. Experts predict that the new parliamentary composition "steer" will be socialists and euro skeptics. A significant number of seats will occupy the ultra-right. The latter is particularly noteworthy. Among the ultra-right will lead, according to fresh forecasts from “VoteWatchEurope”, the Marine Le Pen party. The “National Front” in France can receive two dozen mandates. Colleagues Marine Le Pen from Austria, the Netherlands, Belgium, Sweden, Italy will complete the creation of an ultra-right group in the European Parliament. 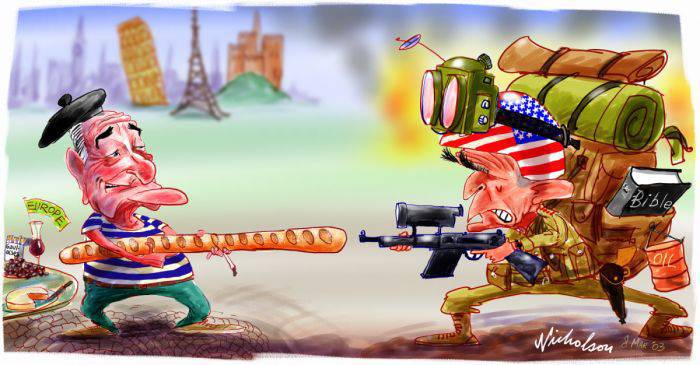 In January, Marine Le Pen once again spoke about the policy pursued by her party: “What can be done to make the EU better? We need to achieve its collapse. " When “National Front” passes to the parliament, “attempts of further development of this federalist EU” will be blocked. Marine Le Pen speaks, as we know, for a Europe of free nations, and the road to creating one will be open only when the EU collapses. Well, therefore, and it is necessary to destroy it.

The members of the “National Front”, by the way, condemn the current EU policy towards Ukraine. That's what the newspaper said "News" the ideologist of the international politics of the French nationalists, Louis de Dunn:

“... In France, as in many other EU member states, the economy is crumbling. Euro strangles us. And against the background of the most severe unemployment, we are not at all smiling at the prospect of getting another huge amount of cheap labor from Ukraine. And it is not clear what to expect from maydanovtsev in power. Some of them are American neoconservatives like John McCain or George Soros, who are sponsoring the Femen movement. We are also worried about new legislative initiatives - for example, the decision to establish the only state language, Ukrainian, in a country with a large number of Russian-speaking people. ”

In parallel with Marine Le Pen, daughter of Jean-Marie Le Pen, another nationalist from Austria goes to the European Parliament. She is also the daughter of a party nationalist, Jorg Haider. She is younger than Marin, she is not 45, but 37, her name is Ulrike Haider-Querick. This woman represents the Alliance for the Future of Austria party and claims that she is a politician of a new formation. The old politicians have to retire. New Europe, according to Ulrike, should be built on the principles of equality and justice, otherwise European countries will face an unprecedented crisis.

And here is another hot girl. Her name is Alessandra Mussolini, she is Benito's granddaughter, she is 51 a year, she has been elected to the European Parliament more than once (since 2004), and is also known as the founder of the Social Initiative party. It is likely that her figure will decorate those conference rooms where the delegates of the “European people” gather.

Last year, the Federal Congress of the League of the North Party took place in Turin, which, if we consider the composition of its participants, turned into the largest meeting of euro skeptics with a total number of 2000. Here was the aforementioned Louis de Dunn from France, and Geert Wilders (leader of the Party for Freedom from the Netherlands), and representatives from Austria, Flanders (Belgium), Sweden, and so on, as far as Russia. The League of the North was represented by the founder of the party, Umberto Bossi.

As for the Italians, they agreed on Italy’s exit from the eurozone and the return of the lira. Brussels officials were called "dictators". EU countries undoubtedly need sovereignty, including locks on borders.

The Italians were warmly supported by the French and Dutch nationalists. There were even calls to "go to Brussels."

Analysts fbii.org cite the opinion of experts awaiting the defeat of supporters of Euro-Atlantic integration in the elections to the European Parliament: up to 40% of the 766 mandates can go to parties opposing friendship with the United States. The fall in confidence in the US is associated with exposing scandals over global NSA surveillance. The United States is coming under fire from critics and for political, economic and military intervention in the affairs of independent countries and pitting their allies with their foreheads.

The locomotive of anti-Americanism is the French National Front, and its ally is the Party for Freedom from the Netherlands. The far-right bloc also includes the Belgian Flemish Interest. Add here and the above-mentioned "Alliance for the Future of Austria."

Nationalist parties at the European level will be able to create a powerful interfactional grouping, analysts say.

In separate columns, the authors point out, the British Independence Party (UKIP), the Bulgarian ATTACK, the Greek Golden Dawn and others go to the European Parliament.

After Snowden's revelations, anti-American forces rely on an apparent increase in anti-American sentiment among Europeans. Here are the numbers: only 3% of Germans believe that the US can remain an ally of Germany (data from the ARD poll published in the newspaper Die Welt). At the same time more than 60% believe that the United States can not be trusted. More than half of Germans do not trust the American president. Finally, as many as 82% of respondents believe that US intelligence agencies will continue to monitor the citizens of Germany.

And how can the young and hot right-wing forces, who will send the old European parliamentarians to rest, repay hated America? That's how. “Revenge can be accomplished, for example, by abandoning the Free Trade Agreement between the EU and the US or by reviewing the parameters of bilateral cooperation in the fight against terrorism,” fbii.org quoted the newspaper La Repubblica. “These actions can be warning shots in the direction of Washington.”

With such threats, the European Parliament will become a real headache for the White House, for at least the next five years, analysts conclude.

Adam Nyman, Chairman of Debating Europe, in an interview Euronews acknowledged that if euro skeptics will gain more than 25% in parliament, the situation will be "quite complicated."

And then there's the Federal Constitutional Court of Germany 26 February РѕС‚РјРµРЅРёР » three percent barrier for parties wishing to get into the European Parliament. According to the decision of the court, the existing restrictions contradict the Constitution of the Federal Republic of Germany, violating the principle of equality of political parties.

Earlier, nineteen small German parties turned to the constitutional court, including the Ecological-Democratic Party, the association “Free voters” and “Alternative for Germany”. Now all German parties that have won at least 1% of the vote in Germany, including the mentioned “Alternative”, which is against the euro currency, will be able to get into the European Parliament.

By the way, besides the “headache” for Washington, the nationalist European Parliament can also become a pain for Brussels. Deputies can block any Brussels decisions. And if you take into account that Marine Le Pen, for example, is not only against the ideas of the so-called federalization of Europe, but generally against the EU, the new composition of the European Parliament may turn out to be the first nail in the coffin of the union, which the newspapers wrote at the beginning of 1990's .

Observed and commented on Oleg Chuvakin
- especially for topwar.ru
Ctrl Enter
Noticed oshЫbku Highlight text and press. Ctrl + Enter
We are
Marine Le Pen: closer to Russia, farther from AmericaEuropean nationalists on the rise: the EU will collapse like the USSR
Military Reviewin Yandex News
Military Reviewin Google News
14 comments
Information
Dear reader, to leave comments on the publication, you must sign in.