Sevastopol. View from the outside 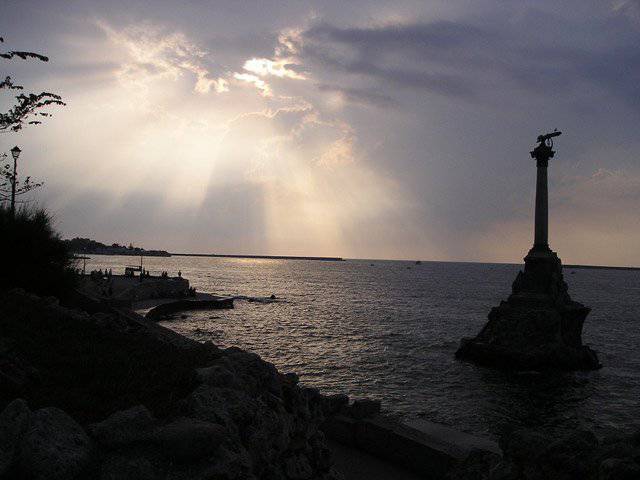 This is the first (and hopefully last) article I wrote. Most likely, not everyone will like it, and not everyone will agree. It was written from the point of view of an ordinary resident of a small hero-city, an assessment and analysis of what is happening, forecasts of events and assumptions about their premises were provided. All conclusions can be disputed, I am not a political scientist, I am an energy engineer.

Start over. Background events. Maidan happened, they sent "Berkut", maydanovtsy burned tires and seized buildings, slogans "Urine Muscovites, Jews, sterilize Russians, long live democracy" sound on the one hand, on the other hand they quieterly wait and wait, support a little, but no one especially rampage not rushing

In February, the Maidan activists sharply intensified, against the background of the complete impotence of the government, they seized power and began to crack down on all the "unidentified". Here I especially want to emphasize the following:

a) the leadership of the Ministry of Interior merged "Berkut" and "internal", and for one for that I would have them ... (crossed out by the editor);

b) open to the public "Mezhyhirya", opened many cases, which clearly goes to a huge plus Bandera;

c) impotence and inaction of the authorities "is provided" by blocking foreign accounts;

d) representatives of the South-East and Crimea met in Kharkov, talked about something with Russia and decided to stay in Ukraine. These shout that the Maidan is not even bad, we just do not know everything (assumptions on this issue are outlined below), some of them still make moves towards neighboring Russia, but some are uncertain and strange (see below for more );

e) after the “election” of the president and the new “democratic” government, the Rada stamps the laws like dumplings and then approves them;

f) Yulia Vladimirovna, the Valkyrie of the Revolution, was released; however, her meeting on the Maidan and in the West raises many questions;

g) an official investigation begins with search for extreme punishment of perpetrators of law enforcement agencies. Against the background of the “public and voluntary” repentance of the Lviv “Berkut” in Lviv, it becomes clear how the certification of personnel will take place. Perhaps even the study of the main provisions of the book "Mein Kampf" followed by writing an essay (this is the lyrics);

h) there are days of mourning for those killed in "peaceful demonstrations" and everyone mourns for their own dead. Here I would like to note that if the security forces were sent to Kiev by order, then the Bandera came themselves. I express my sincere condolences to the families of the dead warriors of power structures;

i) you also can’t bypass the blocking of the broadcast of the closing ceremony of the Olympic Games in Sochi, let me remind you that ALL references to its broadcast were “cut out” in Ukraine. Here, the main question is where does this, in general, poor Ukraine have such opportunities, given the resources spent by Russia;

k) the normal exchange of information is greatly disturbed, there is a constant infusion of various Trojan horses, and the infusion is so widespread and massive that again awkward questions arise;

k) massive betrayal of almost all politicians, feverish repainting in a convenient color (chameleons nervously smoking aside) practically deprived the Southeast and Crimea of ​​leaders who the people could follow;

m) new leaders (Chaly in Sevastopol, for example), for the time being, they only talk about protection from Bandera Democrats. However, so far there are no clear and meaningful statements about HOW WE WILL LIVE FURTHER;

All the above leads to the following conclusions:

a) policies of Yu.-V. and the Crimea received a clear signal from Russia: together with you, we do not need Ukraine. While Kiev is ready to leave them at the trough, but with the condition of handing over the territories under their control. This is also indicated by the run for the presidency of ALL UKRAINE Dobkin;

b) the newly elected leaders Yu.-V. and of the Crimea, they are not yet able to control the situation normally, since “Kiev agreed” almost everywhere in the apparatus;

c) on the background News from Kiev "everything is fine with us, we are in Europe, what are you buzzing" there is a decomposition of the self-organized Yu.V. and Crimea;

d) the absence of objective news about what is happening, the presence of only the Kiev point of view, which sooner or later will lead to "everyone has gone home”;

e) if in the near future Yu.-V. and the Crimea will not formulate the principles of how to live on; they will not find their leaders and anchor points of resistance; this will lead to a repetition of the results of the first Orange Revolution, when s.-V. and the Crimea has been wiped out, regionals ob ... con, and this is all over;

e) it should be borne in mind that promises to forgive everything and to live peacefully are given not by the first persons of the opposition, but by those whom we practically do not know, and, notice, in the RUSSIAN LANGUAGE! What then will allow the first persons to disown them and begin to sculpt "Svidomo Ukrainians" on their own patterns, punishing the innocent and rewarding the guilty.

a) if the information blockade is not broken, there will be a grandiose overflow of movements, there will be no one to defend or attack, which is what Banderovites need;

b) if the slogans and rules of life for the future are not formulated, people, looking like guarding monuments and barricades, will disperse themselves, since no one will come to seize them, will come later, when everyone disperses, and tumble down monuments, rename the streets by law. I think this is the basis for the calculation of Westerners;

c) if the employment of the teams in peacetime is not formed, they will disperse themselves, the most reasonable solution is to conduct shooting, trainings, etc. People must believe that the government trusts them, to feel self-confidence;

f) if the slogans do not meet the expectations, the protest is likely to subside and go out. For everything to work out, we need real actions to improve the lives of the population, that is, many will have to lose something, you know what that means;

g) the average resident Yu.-V. and the Crimea will not go to fight for those who have recently crushed his "Lexus", delayed wages, selected an apartment, in the end, just despised. In order for this to happen, you need to really change the worldview and those in power. It is really necessary to lose something in favor of this resident, you understand that very few people will voluntarily agree to it, or rather, no one will agree;

h) Russia now practically does not interfere and the reason is on the surface - as soon as there is interference, Ukraine will be so pumped up with money and benefits that only the lazy will not shout "curse Moskali", the wait-and-see attitude is now the most profitable, since the West is spending resources, but the result not yet seen.

In conclusion, I want to say to everyone that the secession of one of Sevastopol will do nothing, the minimum provision of one’s own needs is achieved only with the secession of the Crimea. The best option is the department of Yu.-V. and the Crimea together, as a single state, only then can we provide for ourselves and not become freeloaders, this is most relevant in the light of recent statements by the “prisoner of conscience”: “We’ll save, we’ll sell electricity abroad.”

Freeloaders and weaklings are not needed by anyone, they are pitied and despised quietly, we must understand this.

I also want to say to all the fighters and commanders of the "Berkut" units and the internal troops, and other units of the Ministry of Internal Affairs involved in the elimination of Maidan. We here in the Crimea, in Sevastopol, really want the winning gang to forget about you and leave your families and loved ones alone, but it is difficult and difficult to believe in it. All those who want security for themselves and their loved ones, who are already tired of repenting for those who betrayed you and fled, are invited to the Crimea. You know how we met our fighters, they carried out the order, and they have nothing to repent of. Come visit, We will help all that we can!

Ctrl Enter
Noticed oshЫbku Highlight text and press. Ctrl + Enter
We are
"Golden Eagle": everything is just beginning. The fact that the Kiev authorities will never publish"In Kiev, we fought with werewolves." "Golden eagle" told about secrets of the Maidan: snipers, capture of a mortuary, underground smithy
Military Reviewin Yandex News
Military Reviewin Google News
68 comments
Information
Dear reader, to leave comments on the publication, you must sign in.