The fourth generation submarine will be tested in the Arctic 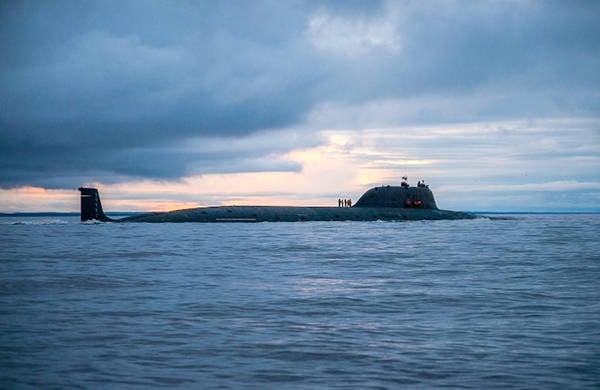 Fourth-generation multipurpose nuclear submarine of Project 885 Ash, called Severodvinsk and under the command of Captain I Rank Sergey Mityaev, which is in trial operation of the North fleet, confirms its characteristics.


The Navy received a new submarine at the very end of the 2013 of the year. Before introducing it into the fleet as a full-fledged combat unit, submariners should check the ship in trial mode. This is not a test - they have been successfully completed, but also not a service. People must fully master the most complex mechanisms, and the boat must get used to the person, merge with him into a single all-destructive fighting organism.

This is due to the fact that nuclear submarines, similar to the 885 project, have never been, not only in the Navy of the USSR and even more so in Russia, but also in the US Navy. In the nuclear submarine fleet, two classes of combat submarines were formed: strategic missile submarines and multi-purpose hunting boats. The latter were supposed to protect the strategists, and in the event of the outbreak of hostilities, find and destroy enemy surface ships and enemy submarines.

The hull is covered with a new generation of protective material that makes the boat invisible.

The 885 project is the newest fourth generation of multi-purpose submarines, the tactical and technical characteristics of which were approved by the USSR Navy Commander S. Gorshkov and were already implemented by Russian shipbuilders. The boats of this project are distinguished by a fundamentally new architecture and various weapons. Torpedo tubes and missile launchers are located in the middle of the hull. And the entire nose section is occupied by the powerful Irtysh hydro-acoustic complex, the most important part of which is considered to be the newest Amfora hydroacoustic station. Submarines of the project "Ash" have the most sensitive "ears" among all domestic, and most likely foreign submarines. The hull is covered with a new generation of protective material, which makes it difficult for the submarine to be detected even with active location by foreign sonars, and also reduces its visibility in the infrared and radio frequency bands.

Being in trial operation, the Severodvinsk is probably the only boat in the world that feels equally comfortable and confident in hot tropical waters and in the icy waters of the world ocean. This submarine perfectly "sees" in the icy wad of the Arctic zone, where hydrology is one of the most complex in the world. It will be a reliable guardian of the Arctic.

Boats project 885 able to independently find and destroy any enemy ship - surface and underwater. They have the most modern protection, including anti-torpedoes and its own air defense system. Missile armament allows you to strike at ship groups, as well as at ground targets not only in the coastal zone, but also in the depth of the enemy’s territory. In fact, this is a true multipurpose heavy submarine cruiser, equipped with all kinds of weaponsexcept strategic.

Successful completion of the test head "Ash" - a breakthrough in military technology. The 885 project, for all objective and subjective reasons, should not have happened.

It was the first warship laid in December 1993 of the year, not in the USSR, but in the new state - the Russian Federation. They called the boat the name of the city in which it began to build and built. The order was repeatedly threatened with closure. And here it is impossible not to say about a man who for a long time was considered the top secret expert of the national defense industry, under whose leadership the unusual submarine cruiser was designed, built and brought to transfer to the fleet.

This is the general designer of the special design and assembly bureau "Malachite" Vladimir Nikolaevich Pyalov. Thanks to him, he managed to realize not only the project "Ash" and the latest projects of special-purpose deep-sea research equipment, but also to raise the national school of designing multi-purpose nuclear submarines to a new level. 28 February it marks 80 years, and the designer is full of creative plans.

His father, a front-line soldier, died at the very beginning of the Great Patriotic War, and Volodya Pyalov himself miraculously survived the blockade of Leningrad, without leaving the city he came to when he was two years old. In "Malachite" worked 55 years. He headed the company in the most difficult time: from 1999 to 2011 year. Now he is the general designer.

The chief designer of the 885 project, Vladimir Pyalov, was from the very beginning of its development. He had to solve an almost impossible task: to create a new cooperation of almost a thousand Russian enterprises capable of carrying out a single order - to build a fourth generation submarine by joint efforts. Previously, the entire industrial potential of the USSR worked on such projects. Vladimir Nikolaevich actually showed that Russia is able to build even such unique ships as the Yasen on its own.

In the course of almost twenty years of construction, very significant innovations were introduced into the project, which did not allow the submarine to become obsolete. Now in the construction are boats of project 885M, which, likening aviation terminology, can be attributed to generation 4+ boats. And the Malachite team is already working on fifth-generation combat submarines and underwater vehicles capable of performing various tasks in all areas of the oceans.

The nuclear submarine missile cruiser Severodvinsk, in accordance with the approved pilot program, is preparing to enter the Arctic Ocean, where crew coordination in the difficult conditions of the Arctic and the integrated work of all combat systems and mechanisms will be worked out.

A "Rossiyskaya Gazeta" heartily congratulates the outstanding designer on his anniversary birthday, wishes him good health and, according to maritime tradition, seven feet under the keel.