"We make them so far." In India, a new state of emergency happened with a Soviet-made submarine 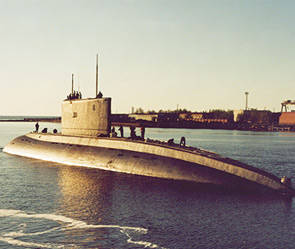 In Indian Mumbai, smoke occurred on the submarine Sinduratna. It is known about two missing and seven affected sailors. The probable cause of emergency is already called the leakage of hydrogen in the battery compartment. Similar problems with batteries in 2010 were on another Indian submarine of Russian production.


Two Indian naval officers from among the crew of the diesel-electric submarine Sindhuratna, on which smoke was observed during the tests, are reported missing. Information about the missing sailors announced the Indian television channel NDTV.

At the same time, a source close to the Indian Navy, ITAR-TASS reported that seven people were injured as a result of smoke on the boat. They lost consciousness and were taken by helicopter to the hospitals of Mumbai (Bombay). Neither the media nor the official representatives of the Indian authorities have yet reported on the exact number of seamen on board.

In turn, the newspaper The Hindu clarifies that the incident happened 26 February in 6.00 local time (4.30 MSK). Damage is generally assessed as minor. Currently, the submarine is afloat.

According to NDTV, at the time of the incident, Sinduratna was in 40 – 50 km off the coast of Mumbai on trial after repair. The submarine was forced to resurface after smoke was detected on board. Indian media also noted that Russian representatives (who built the boat) are not allowed to investigate the state of emergency.

Regarding the probable cause of smoke, as reported by the largest Indian news agency PTI, it was due to a leak of hydrogen in the battery compartment. According to a number of Indian media, there was also a small explosion and fire.

Note that similar problems with batteries were on the submarine "Sindurakshak" - similar to the ship of Russian construction. In February, a fire broke out on board 2010, as a result of which one sailor died and two were burned. The commission concluded that the cause of the fire was a valve malfunction in one of the batteries, which led to the release of hydrogen. This release usually occurs when charging batteries. Every few months they need to be recharged, while on the boats of the 877 ECM project this is done partially by hand.

As a member of the crew told later, the hydrogen released by the batteries during charging is pumped out by means of pumps through flexible air ducts, the position of which must be constantly monitored. If the position of these ducts is not followed, then the hydrogen begins to mix with air and accumulate in the compartments where it can ignite from any spark.

"Kilo class submarines do not have automatic monitoring systems, and the charge level of each battery must be checked manually," said one of the Indian sailors who served on the boat. He explained that the boat's 500 batteries need to be charged several times a year, it is a large number of manual operations that explains the fact that there were a lot of people in the boat’s compartments.

In August last year, several explosions occurred at once on the Sindurakshak, after which the boat caught fire and sank in shallow water. All 18 aboard sailors died. It was the biggest tragedy for the Indian Navy in almost half a century.

As for the Sinduratna submarine incident, its crew conducted sea trials after repairs, there was no armament on the submarine. Currently, the boat, accompanied by the ships of the Indian Navy, is returning to the coast of the country.

Nikolai Zharkov, director of the Krasnoye Sormovo plant in Nizhny Novgorod, where the submarine was being built, said on Wednesday that Project 877 submarines were absolutely reliable, and the “human factor” could be the cause of the fire on Sinduratna. According to him, the Krasnoye Sormovo plant built such submarines for many years. “We built them as for our naval fleet, and for other countries, in particular for China and India, he said. “There were no complaints about the quality of the construction to us.”

"There is no accident rate justified"

And Igor Kurdin, chairman of the Petersburg submariners ’club of captain of the 1 rank of the reserve, told the VIEW newspaper that it’s too early to talk about the reasons for a state of emergency, you have to wait for at least the official conclusions of the local authorities. But in general, he also does not exclude the "human factor".

“We build well, and the majority of all accidents - at 90% - occur through the fault of the personnel. At one time, the admiral of the Soviet fleet Sergei Gorshkov said: “There is no accident rate justified and unavoidable. Emergency conditions and the conditions for its occurrence are created by their irresponsibility and illiteracy. ” Once this quote hung in every compartment of submarines and on every deck of a surface ship and served as a reminder of this, ”said Kurdin.

He also said that the Kilo class boats have been built for many years and have proven themselves well. “The boat of the modernized 636.6 Krasnodar project was literally laid last week at the Admiralty Shipyards in St. Petersburg. And if we do them so far, and for ourselves too, then this says a lot. And the export option, perhaps, is going even more scrupulously, because otherwise there will be image losses, etc., ”the expert added.

Finally, Kurdin noted that Indians are not slackers, and the "human factor" affects the accident rate in any country: "Indians are quite accurate and scrupulous," he concluded.

The site of the Russian project "Storm Depth" dedicated to the submarine fleet, provides accurate information about this submarine.

This submarine B803, S59 Sindhuratna project 877 "Halibut" (or Kilo), a modernized version of it - 877EKM. ECM stands for "export capitalist modernized" option. It was laid by the order of the Government of India at the Red Sormovo plant in Nizhny Novgorod (then Gorky) 15 of May 1986.

15 April 1988 year launched. 14 August 1988, the year was commissioned as part of the Soviet Navy. 22 December 1988 of the year transferred to the Indian Navy and renamed S59 Sindhuratna. In 1989, she made the transition to India and began to be based in Mumbai.

In 2001 – 2003, the company underwent medium repair and modernization at the Russian shipyard Zvezdochka in the city of Severodvinsk. In December 2010, the Zvezdochka ship repair center was appointed as the main contractor for the re-equipment of this boat, as well as a number of other Soviet and Russian production that are part of the Indian Navy (S57 Sindhuraj, S58 Sindhushastra).

This modernization should be carried out in Indian shipyards for five years. It is reliably known that Zvezdochka has already begun upgrading a similar S61 Sindhukirti submarine based on the Indian Navy Vizakhapatnam.

Between 1983 and 2000, a total of 18-like boats were built in the year. One of them was built for the Navy of the USSR and used for crew training, the rest went abroad. They were assigned to the fleets of India, China, Algeria and Iran. Part of the Indian submarines underwent medium repair at the Admiralty Shipyards in St. Petersburg, and some at the Zvezdochka in Severodvinsk.

Varshavyanka, the submarines of this series are also called, is the most modern and quiet diesel submarine of domestic production, for which it was nicknamed “black hole” abroad. The surface displacement of the boat is 2300 tons, the length is 72,6 m, the range of scuba diving is 6000 miles, the speed in the submerged position is 18 knots.

According to Sturm Depth, in August last year, when stationed in Mumbai, Sinduratna received minor injuries (their character was not reported - LOOK) during the explosions at Sindurakshak.

We also add that the cooperation of Russia and India in the military sphere was overshadowed by problems with the transfer of the Indian Navy to the aircraft carrier Vikramaditya (former Admiral Gorshkov). In November last year, he began the transition to India, and in January of this, he finally arrived at the Karvar naval base.

At the end of 2012 of the year, several months before the ship was handed over to the Indian side, an accident occurred during sea trials in the Barents Sea - the aircraft carrier's boilers that serve the ship’s steam turbines failed.