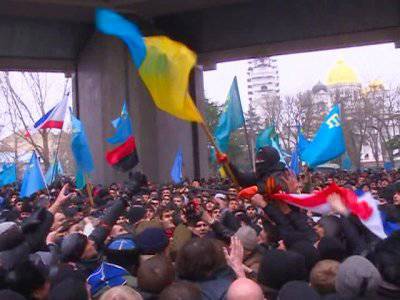 In Simferopol, all past night, at the building of the Supreme Council of Crimea, protesters built barricades and made fires. They demand to restore the constitution of the region as amended by 1992, and call for a referendum on the future of the peninsula. Meanwhile, the number of victims of riots in Simferopol increased to three people - another woman died in the crush of injuries in the hospital.


In Simferopol, preparing for new clashes. In the city center people are on duty around the clock. A tent city is being built under the walls of the local parliament. Supporters of the idea of ​​a referendum, opponents of European integration are now building barricades around the Supreme Soviet of Crimea. In fact, they blocked it and put forward their demands. Russian-speaking residents, who are in the majority in Crimea, want to hold a referendum on the status of the region.

“We are Donetsk, Kharkov, Crimea, we want a customs union. We want to Russia. We don’t want to live with the Nazis and the Nazis in one state,” said one of the protesters. Showing their attitude to the events in Kiev and disagreement with the coup, people shouted "Golden Eagle!", Supporting the police special forces, now banned in Ukraine.

These cries drowned out any others, although there were two rallies at once. One - against the nationalist government in Kiev, the other - in its support. The first - with the flags of Russia and the local party "Russian unity", the second - with the flags of the Crimean Tatar community.

Here it is - the line of confrontation in Simferopol. The doors of the Supreme Council are now being held by a group of people who have declared an indefinite rally and are demanding that local authorities not to recognize the laws adopted in Kiev. On the other hand - a group of thousands of people with the flags of Ukraine and the Crimean Tatars. Everyone is chanting their slogans. On the one hand shout "Russia", on the other - "Ukraine".

The deputies were to hold an extraordinary meeting and decide how to relate to the coup in Kiev. Waiting for their decisions, people gathered around the parliament. Including about five thousand Crimean Tatars. They are for Kiev Maidan. "The Crimean Tatar people are striving to preserve their integrity, the Crimean Tatar autonomy within Ukraine. We do not want to be in the customs union," said a representative of this part of the protesters.

For a while, there were more Maidan supporters. But then almost the whole of Simferopol was pulled up to the center. The adjacent streets were filled.
More than ten thousand people came straight to the parliament with St. George ribbons, demanding to hold a referendum to honestly decide how the Crimea will live on. “Crimea has always been a territory of tranquility, a territory of stability. And we are here today to prevent any provocations,” said one of the Russian-speaking residents of Crimea.

Fights between the warring parties in Crimea began almost immediately. First, small uncontrollable skirmishes. Then the Crimean Tatars went on the attack with the whole mass. Peaceful protesters were not ready. Hands fought off sticks and twigs. About thirty people were injured. Three in serious condition were hospitalized. The Ministry of Health of the Republic confirmed that one woman died.

Nobody stopped the beating of the demonstrators. The fight stopped only when the deputies declared that there would be no meeting of the Supreme Council. He decided to move. Supporters of the Maidan left, leaving behind broken sticks and fires of Russian flags. Their opponents immediately returned here. The ambulances coached the entire evening between the Supreme Council and the hospital. People after that did not disperse and did not reconcile. Quite the contrary. Now here is antimaydan. Residents of Simferopol self-organize. Without funding and orders from above. Food and medicine are brought to the point of help. They meet here on the square for the first time and remain standing. "Fascism will not pass! Fascism will not pass!" - shout participants antimaydana.

There are no people prepared for street fighting among these people. Barricades rather a symbol of resistance. But they say here that there may not be another chance to protect themselves. “We want to speak in Russian. Absolutely everywhere. In stores, write statements to certain services. We really want this,” says one of the residents of Crimea.

Despite the tragic outcome of the clashes the day before, the residents of Simferopol are again ready to go out. They are not stopped, and reports that militants are coming here from Kiev Maidan.

Ctrl Enter
Noticed oshЫbku Highlight text and press. Ctrl + Enter
We are
Tanks and roses. Donetsk lives in a fragile truceIn the center of Moscow a nest of “aliens” appeared: the installation with the eggs of the “fifth column” was exhibited in Novopushkinsky Square and at the editorial office of Echo of Moscow on the New
Military Reviewin Yandex News
Military Reviewin Google News
198 comments
Information
Dear reader, to leave comments on the publication, you must sign in.