Russia does not leave its. To events in Ukraine 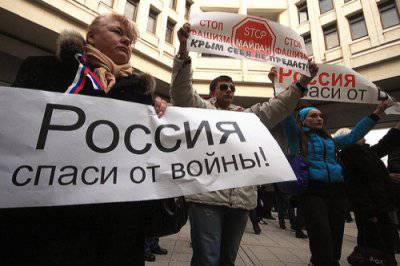 Time of Troubles came to Ukraine. By seizing control of Kiev, the national-radicals turned the country's parliament into a “legislative assembly line”, where all laws are passed quickly and with a large number of votes. The euphoria from the imaginary victory played with yesterday's coup, and now with the new Kiev rulers, a cruel joke. Believing in complete control over the country, they began to broadcast their plans to the press, elevating Russophobia to the rank of “official” politics.


Initiated by Irina Fahrion (she is being punished to the ministers of education), the repeal of the law “On the Basics of State Language Policy” caused confusion even in the west of Ukraine. Users of social networks rushed to comment on this excesses of the “post-revolutionary” power in the following spirit: “Why was it necessary to tease the South-East?”

The news of the intention to include the militants of the “Right Sector” into the Ministry of Internal Affairs also did not arouse enthusiasm in the country ... Events developed rapidly, yesterday’s oppositionists, seizing the levers of power in the capital, expected that the population of the South-East would be stunned, demoralized by the flight and disappearance of Yanukovych and will not resist. However, it did not happen that way. With their blatant demonstration of aggressiveness, the demolition of monuments in a number of cities, the nationalists stirred up the people so much that a resistance movement began to form in many areas.

Sevastopol showed that citizens are capable of self-organization, able to protect themselves and their city. The example of Sevastopol impulse passed throughout the Southeast, giving people the confidence that they are able to maintain order in their own regions.

It became very difficult with the information. To date, the main source of non-tendentious information for residents of Ukraine are social networks and Russian TV channels, as well as the transfer of information "from hand to hand". New power makes wide use of misinformation.

The situation in the country is aggravated by the persistent attempts of the adherents of the schismatic “Kiev patriarchate” to seize Orthodox shrines. A stern warning to those who do this was made by the “Commentary of the Information and Press Department of the Russian Foreign Ministry on the situation in Ukraine”, which appeared in the evening of February on February 9: “Russia is worried about the continuing atrocities of extremists in Ukraine, who, having finally believed in their own permissiveness and impunity, continue to impose their will and impose their own rules. The spiritual sphere was no exception. Following the destabilization of the political situation, the fragile interchurch and interfaith peace that remained until recently in the country fell under the gun. At the moment, threats to physical violence, destruction of churches, of which they are priors, have become frequent to the priests of the canonical Ukrainian Orthodox Church. Recently, attempts were made to seize Orthodox shrines of not only Ukraine, but also of the entire Russian world — the Kiev-Pechersk and Pochayev Lavr. All this is extremely dangerous, it threatens with new upheavals and provokes an even greater split in Ukrainian society. ”

On the same day, the “Statement of the Supreme Church Council of the Russian Orthodox Church in connection with the threat of violent actions against the canonical Church in Ukraine” was made, which reads: “In recent days, we have witnessed overt threats to the shrines of Ukraine, honored by Orthodox believers all over the world and legally under the jurisdiction of the canonical Orthodox Church. Kiev-Pechersk and Pochaev Lavra became the objects of provocations by the radicals. The Sumy Diocesan Administration was threatened. We appeal to all Orthodox Christians of Ukraine, regardless of their political preferences, with a call to prevent attacks on shrines. We thank those who have already risen to protect temples and monasteries, without allowing them to be reproached and rejected from the true Church. ”

For people who today are forced to defend themselves, their families, their religious shrines, their future in Odessa and Kharkov, Sevastopol, Zaporozhye and Simferopol, it is very important to know that Russia does not leave its trouble in the minute of testing, which carries the unbridled "national revolution".

By diplomatic language, but at the same time Moscow clearly stated that the actions in the current Verkhovna Rada of Ukraine cause "deep concern in terms of legitimacy." This intelligible signal alone was enough for the hysterics of national-radicals about “Russian intervention” to begin in the Ukrainian information space. It only says that the rise of the South-East caught the current leadership of the Verkhovna Rada by surprise, and the line of Russia to harshly condemn the atrocities and intimidation of dissidents would not allow the situation to develop according to the Yugoslav scenario. The feverish attempts of the nationalists from Kiev to make some gestures in order to “pacify” the Southeast revealed only their confusion.

Broad informing the Russian society about what is happening in Ukraine, TV spots telling about the command tone of the militants in dealing with law enforcement officers, about the humiliations that the Berkut fighters are subjected to, about the refusal of the illegal armed group “Right Sector” to disarm, do not leave anyone indifferent in Russia. Everyone remembers that millions of Russian citizens live in Ukraine with relatives and friends.

Carrying out now measures to strengthen the protection of the Black Sea fleet in Crimea, Russia cools hotheads of those who threaten to come to the peninsula as part of a “friendship train”.

The economic aspect is also important. The first actions of the Kiev regime against Sevastopol suggest that the economic blockade of the recalcitrant city has been launched. However, the new Kiev authorities simply do not have enough strength for this. And by the way, at any moment, all regions can stop receiving money from the center for the reason called by the new proconsul of Ukraine A. Turchinov: "The treasury is empty."

The tactics that the Kiev leaders are counting on, namely, to make the population of the Southeast “extreme” for a possible aggravation of relations with Russia, is untenable because the protracted “maydanization” of the country equally causes enormous economic damage to all regions.

The situation in the South-East of Ukraine, which arose as a result of a coup d'état, the shock units of which were neo-Nazi groups, cannot but affect Russia directly and due to the fact that the long land border between our countries both divides and connects the millions of families living in the border areas. And the leaders of the Ukrainian nationalists are already discussing plans for “exporting the revolution” to the regions of the Russian Federation adjacent to the South-East.

The visit of the head of the committee of the Russian State Duma for the affairs of compatriots L. Slutsky to the Crimea, the arrival of the delegation of the Council of the Federation outlined in the near future clearly shows the importance for Russia of the support of compatriots. The words of L. Slutsky about the “insufficient presence of the Russian media in the region” were perceived by Crimeans as a sign that in the near future they and the South-East as a whole will receive support in the information war against them.

After the successful for Russia ending the Olympics in Sochi, the topic of Ukraine in the Russian political community and in the expert-analytical environment confidently came to the fore. They talk about it from television screens, and at meetings with the participation of the President of Russia, and in social networks. The Cossacks of the South of Russia declared their support for the population of the Crimea and the entire Southeast.

Residents of the South-East noted that All Russian parliamentary parties, without exception, took the initiative in supporting their compatriots in Ukraine. In approaches to resolving the heightened “Ukrainian issue”, Moscow not only relies on active diplomacy, but also considers a set of measures for the practical support of compatriots who are suddenly abandoned in the conditions created by the course of “post-revolutionary” Kiev to Ukraine’s fascization.

Ctrl Enter
Noticed oshЫbku Highlight text and press. Ctrl + Enter
We are
National radicals: a role in the current Ukrainian crisisWho threw Yanukovych: expert opinion after the signing of the law on language policy
Military Reviewin Yandex News
Military Reviewin Google News
157 comments
Information
Dear reader, to leave comments on the publication, you must sign in.