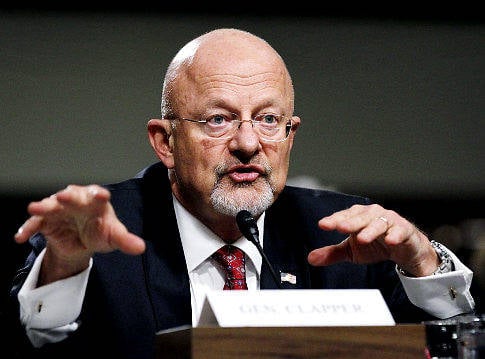 National American intelligence chief, retired General James Klapper, once again stunned the political establishment. Thus, during his report to the Senate Committee on the Armed Forces, the general declared Russia and China "deadly enemies" of the United States. At the same time, Clapper never mentioned the countries that America traditionally attributes to the axis of evil - North Korea and Iran. In addition, according to the general, Colonel Gaddafi will remain the leader of Libya, destroying the opposition. This sensational statement is in contrast to the basic political attitudes of the Obama administration and has caused a rather mixed and sharp assessment on the part of senators.

Russia and China are very dangerous.

Clapper, in his report, rather modestly assessed the development of the armed forces of Russia and China. According to him, the economic success of the Middle Kingdom, its acquisition of the status of the second largest economic state in the world and the successful overcoming by China of the negative results of the global crisis gave this state the potential to introduce a long-term program to improve its armed forces.

The General noted that the intelligence services of America, based on the results of monitoring the foreign policy of China and its desire to take a leading position in the international arena, do not exclude the possibility of conflicts between the Celestial and countries bordering on China, especially on issues relating to priorities in the maritime territories.

So, according to Clapper, last year relations between Taiwan and China were positive and remained at a stable level. The parties have ratified the framework agreement on mutual economic cooperation. But at the same time, Clapper said, if Taiwan and China cannot keep steady progress in the political and economic dialogue, then this relatively relative constancy can be destroyed.

As the leader of the U.S. intelligence community announced, China began implementing its rearmament program in the late 90s. An example for him was the military conflicts in the Balkans and in Iraq. The country's leadership has realized the threat that high-precision missile systems can create. On this basis, the Chinese leaders began to invest significantly more in the development and creation of their own medium and short-range ballistic missiles, military space systems, reconnaissance, detection and surveillance means. In addition, China invests a lot of money in reforming missile defense and air defense, developing the Navy and aviation.

Thus, in the Celestial Empire, new fifth-generation fighter J-20 was tested, which, according to the director, may indicate China’s firm desire to create advanced weapons. However, Clapper believes that China has made some progress in developing its weapons. In his opinion, the PRC still needs quite a lot of time and money to produce weapons, which by their parameters will correspond to the advanced world standards.

Regarding Russia, the US intelligence chief noted that in 2010, tangible progress was made between the two countries. So, in April last year, the Treaty on Strategic Offensive Arms was signed between the United States and Russia. In addition, Moscow has shown willingness to cooperate with Washington in combating the production of drugs in Afghanistan and blocking their transit through Russian territory to Europe and the United States, and countering the creation of an Iranian nuclear program. In addition, the report Clapper indicated that Russia is ready to discuss areas of cooperation with NATO countries and the United States in the field of creating missile defense in Europe and to hold a series of negotiations to discuss the Treaty on Conventional Armed Forces in Europe. The general also noted that the Russian Federation, as a result of the implementation of the necessary measures, has advanced in the direction of its accession to the WTO.

However, Clapper noted that there are certain differences between the United States and Russia. So, in his words, among the representatives of the Russian leadership, there is a perception that the creation of a missile defense system in Europe as a result will be directed against the Russian Federation. In addition, Moscow is against discussing issues related to the withdrawal of troops from Abkhazia and North Ossetia and the recognition of the territorial claims of Georgia. The head of the US intelligence community also noted that in implementing its modernization program for the armed forces, Russia proceeds from the principle that America and NATO are potential adversaries of the Russian Federation. According to Clapper, strategic nuclear weapon The Russian Federation contributes to the containment of the conflict world potential and increases its geopolitical influence. In addition, the ordinary armed forces of the Russian Federation have good combat training and readiness. The main objectives of the conventional Russian Armed Forces at present are Western Europe, the Caucasus, the Far East and Central Asia. In these regions, the Russian armed forces provide influence to Moscow and create a security belt from which the Russian Federation will defend its borders.

Well-organized, according to the general, but small-scale Russian exercises fleet in the Indian Ocean, the Caribbean and Mediterranean Seas, the Atlantic are traditionally aimed at demonstrating the peaceful use of the forces of the Navy and convince the world that Russia is a large maritime state.

Beginning with 2008, the Russian Federation began implementing a large-scale plan for reforming its own armed forces, which is fundamentally different from the principles of building the army used in Soviet times.

According to James Clapper, the modern leaders of the Russian state understand that there is a potential opportunity for Western troops to participate in military clashes on its borders, which in turn can lead to a decisive and quick reaction of the Russian army to the circumstances. At the same time, the general stressed that as the Russian armed forces develop and the Kremlin’s positions on the world aren’t strengthened, its leadership is likely to be more inclined to decide on the direct participation of military units of the Russian Federation in peacekeeping operations. And this, according to the chief of intelligence, is a positive fact.

Bomb for members of Congress.

The head of the US intelligence community, General James Klapper, while giving assessments of the development of the military potential of China and Russia, in fact did not say anything new. Most of the facts he presented were covered by the world and American press. At the same time, the subsequent discussion of the report and the statements made by the general threw the senators into shock.

So, when asked by the Democratic senator Joe Manchin, which is more dangerous for America in the near future - the development of armies of world powers, the growth of their economic capabilities, or all together, the general said that Russia has a huge nuclear arsenal that represents America’s potential deadly threat "But in his opinion the Russians do not intend to" use it. " This answer was an absolute surprise for senators.

James Clapper was just as categorical on the issue of the military threat to America from the PRC. In his words, China is increasing its military power. It has an ever-growing full complement of strategic and non-nuclear forces. On this basis, the Celestial Empire also poses a mortal threat to the United States. But the general also added that in this case there is the question of the relationship between opportunities and intentions.

Referring to Libya, James Clapper noted that according to his predictions, the regime of Colonel Gaddafi will prevail in the current clash.

The administration of the White House immediately renounced the statements of the general. Tom Danilon, national security adviser to Obama, said that James Klapper based his assessment of the situation in Libya on the basis of statistical data and did not take into account the dynamics of the conflict.

Ben Rhodes, Danilon’s deputy, spoke out against General James Clapper’s statements regarding China and Russia. He noted that none of these states poses a threat to the United States. The nuclear strategic arsenals of these countries are simply one of the areas of attention of analysts who conduct strategic assessments.

In response to the responses of the director of the intelligence community, Senator Lindsey Graham stated that James Klapper must resign or be fired. He argued this requirement by saying that the general does not quite understand what he should do, and how the words of such a person can affect the world community.

Karl Levin, chairman of the armed forces committee, said he was very surprised by the responses of the director of national intelligence. He noted that the general talked only about China and Russia, but never mentioned either North Korea or Iran. To this Klapper replied that these countries are also of concern, but he does not know whether they are currently a deadly and direct threat to America.

Diana Feinstein, the chairman of the Senate Intelligence Committee, said that General Clapper’s opinion raises doubts about the intentions of Russia and China to harm the United States, so she doesn’t quite understand why there was a conversation about these countries, and that’s the problem. However, she does not agree with the resignation of the director.