How are you, Sevastopol? 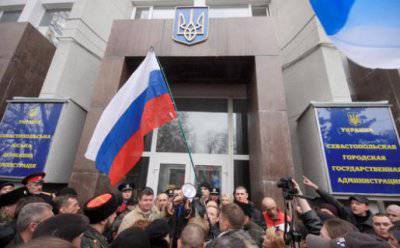 In recent days, the center of the political life of Ukraine has moved from Kiev and the West to the South-East. After all, the southeastern regions now became, in fact, oppositional. The fate of the entire state depends on the position taken by Kharkiv, Donetsk, Simferopol, Sevastopol. We, without pretending to complete the picture (what is happening in Ukraine now - nobody really understands this today), publish first-hand information. And the conclusions? .. It’s not worth rushing to draw conclusions on the situation in Ukraine as a whole and in the Crimea in particular. Too tangled and explosive turned tangle. Everything changes too fast. Too worrying for Ukraine ...


Yesterday, on Tuesday, they did not rally in Sevastopol. At first glance, life in the city seems quite trivial: prices have risen, but not too much, no one destroys anything, nothing smokes. But more recently, passions were raging here. A close look will notice that on Nakhimov Square, in the square adjacent to it, small groups of men and women gather around the city administration building. They lead idle, seemingly talk. But if something happens, Sevastopol will have enough hours to gather a rally of many thousands.

“They said that Duma deputies flew to Simferopol and issued Russian passports,” said an elderly woman on Nakhimov Square.

“No, they only plan,” the girl replies. - But when they are given, they will protect us, like the residents of South Ossetia.

A guy with a tablet in his hands enters the conversation - he is best informed: he just read the statement of State Duma Deputy Leonid Slutsky that “this is a matter of too thin matter, which requires a special decision of the country's leadership”.

Both the boy and the women are warmly dressed, they have St. George ribbons on their chests. In Sevastopol - a small plus, a cold wind is blowing. But the main thing: many residents of the city dress so as not to freeze, if you have to stand on the street for a long time.

The first big standing here happened on February 23. How many people that day went to the building of the city administration, is not known for sure. According to various sources, from 20 to 50 thousands of people - quite comparable with the Kiev Maidan.

Sevastopol went to the rally with Russian tricolors, St. Andrew’s flags, and red flags. There was not a single yellow-blue banner ... And the words of city officials (now former) about the need to obey "the legal orders of the authorities" and "preserve the territorial integrity of Ukraine" were interrupted by a whistle.

“Despite the fact that among the leaders of the rally there were people of very different political convictions, from monarchists to Stalinists,” the final resolution was adopted almost without controversy, ”says Larisa Nemova, an active participant in the latest events. - We decided to create an executive committee that does not recognize the Verkhovna Rada and all its decisions. The Executive Committee takes under its protection the Crimean division of the "Golden Eagle" and the internal troops returning from Kiev. The Sevastopol militia submits to the executive committee. Armed units are being formed to repel a possible attack by the formations from the western regions of Ukraine.

However, of course, not all of Sevastopol share the position of the protesters.

- Our Father Nazarius, the rector of the local cathedral (and he went through Afgan and other hot spots), said so: and defending against enemies, - says Alexey Shukhtuyev, an employee of a local construction company. - This is the mentality of a small garrison fortress town. Here, for example, a couple of weeks ago, a rumor passed through the city that Bandera was going to the city. People quickly organized detachments of self-defense, built barricades around the city hall ... But they did not wait for anyone. No one here, in Sevastopol, saw any Bandera. And if any of them really appear, the local security forces will quickly cover them and send them back home - so that the water is not muddy.

Meanwhile, at the rally, Sevastopol residents chose a new head of the city for themselves - a Russian, a local entrepreneur, Aleksey Chaly, the head of the Tavrida Electric enterprise.

“Sevastopol was one of two cities in Ukraine, whose residents were denied the right to elect the mayor by direct vote,” says Larisa Nemova. - We were not allowed to choose the mayor in the usual way, and we chose him by simply raising our hands at the rally.

Crimeans Alexei Chaly is primarily known as the creator of the museum "35 Battery" - a memorial complex dedicated to the most tragic episode of the defense of Sevastopol in 1942. The memorial complex, created on the ruins of a former fortification, is considered one of the best military museums in the CIS. It is contained on the money of the entrepreneur, the entrance for visitors is free ...

- When those who call for the defense of Sevastopol gathered for a rally, - Alexei Shukhtuev shares his vision of the situation, - they first called on the mayor of the commander of the Black Sea fleet Of Russia. But Vice Admiral Alexander Vitko immediately said that it was not his business. As for the mayor, no one changed him by force. When Yanukovych left, the old mayor himself resigned. And Chaly was chosen in his place. He is a normal man, a Russian, he has his own big company, which works like a clock. And there is confidence that in the city with him there will be a complete order and he certainly will not allow such a mess as in Kiev. And the Sevastopol residents themselves do not want lawlessness. Here the other day local supporters of the Maidan were convened here. They gathered in a crowd of three hundred people at the monument to Taras Shevchenko in the city center to hold a rally. We stood, all jerked, on the nerves, for about two hours - they expected that they would be dispersed now. But Sevastopol residents calmly passed them, examined them with interest - and no reaction. As a result, they parted with the words: “Here are the bastards - they did not disperse us!”

That is, they understood that there was simply no one to fight here. And broke up. So they just have nothing to do here. Meanwhile, on Monday, the official city authorities tried to declare the election of Chaly illegal. Rumors have spread that the Security Service of Ukraine - the Security Service of Ukraine - issued a warrant for his arrest. The election of Chaly was called “Maidan democracy”. As soon as news of the arrest of Chaly was spread around the city, about 10 thousands of citizens gathered outside the administration building. From 77 deputies in the city council gathered 49. After some disputes and hesitations, they unanimously voted for the new head of Sevastopol, Alexei Chaly.

Already on Tuesday, Alexey Chaly accepted the affairs of the city administration. And on the same day, the city police declared that it did not comply with the Ukrainian Ministry of Internal Affairs.

“We will not shoot at our neighbors and friends,” the guards say.

Ctrl Enter
Noticed oshЫbku Highlight text and press. Ctrl + Enter
We are
A great interview with Sergey Lavrov: about Ukraine, Obama and IranWhat you didn't want to know about England
Military Reviewin Yandex News
Military Reviewin Google News
210 comments
Information
Dear reader, to leave comments on the publication, you must sign in.