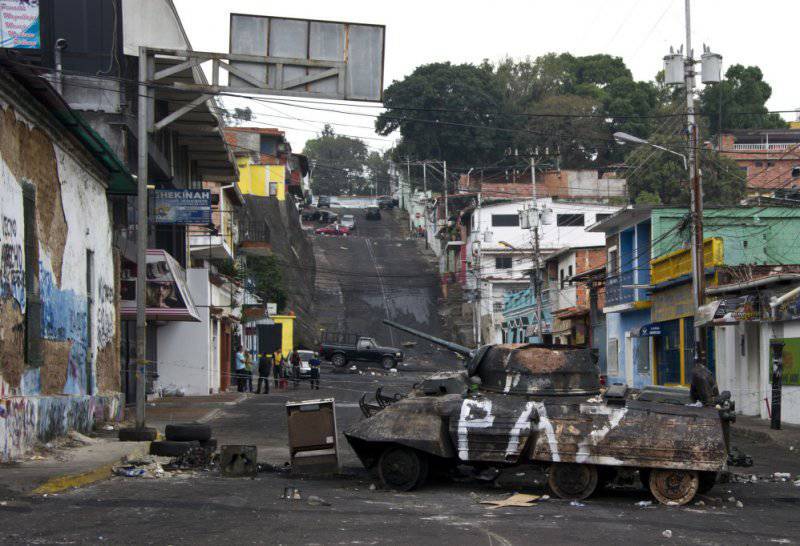 While Europe and Russia are closely watching the events in Ukraine, in one of the countries of Latin America, preparations are under way for a similar coup d'état. We are talking about Venezuela, which has been suffering for a month from gangs attacking police, smashing shops and government offices. Of course, the rebels justify their actions by fighting the “bloody regime” of Nicolas Maduro, the new president of the republic, who was elected by the people after the death of Hugo Chávez.

In Venezuela, there have been intense clashes between opponents and supporters of President Nicolas Maduro during the last weeks. February 12 was the busiest day: then the militants from the opposition tried to storm the prosecutor general's office. There were victims.

In addition to the foreign policy aspect, namely, the US attempts to crush the Venezuelan oil fields, the causes of the conflict were problems of a socio-economic nature. At the beginning of his reign, Nicolas Maduro was faced with a shortage of groceries in the stores: the country's agriculture only a third provides the country with essential foodstuffs.

The government blames the shortage of goods saboteurs. These statements are reasonable: in November last year, the country's leadership launched a large-scale economic campaign aimed at providing the population with household goods. Venezuelans could buy the devices they need at a price that is 10% of the normal price. However, the rally was frustrated by unknown persons who took advantage of the rush for cheap goods and committed a series of pogroms.

In order to stimulate the development of the economy, Nicolas Maduro found support from China: Beijing provided Xaram a loan of 5 billions to Caracas. This money is planned to be spent for the modernization of production facilities, which should lead to an improvement in living conditions in the country.

At the same time, the growth of the republic’s GDP continues. At the end of last year, this figure increased by 1%, which is a pretty good result for any Latin American state. Do not forget about the income derived from the export of oil and gas. By the way, the main buyer of Venezuelan "black gold" is the United States: half of the oil produced in Venezuela goes to the United States. It is not surprising that Washington is so interested in the early overthrow of Maduro: The States are not only going to take care of their energy security, but also would like to take their hands on all Venezuelan oil.

Another interesting fact is that the new president of the republic continues the economic policy of his predecessor, namely, he is engaged in the nationalization of large enterprises. Industrialists are unhappy with such actions, and are ready to go to war against Nicolas Maduro. Naturally, such sentiments of financial magnates are incredibly beneficial to the US and foreign-funded opposition, who view oligarchs as powerful allies.

The United States in Venezuela operates on the same principle as in other countries of the world, namely using the fifth column. The organization “Narodnaya Volya”, funded by the American special services and acting in accordance with the Colombian paramilitary organizations, is the best proof of this. Skillfully using the ambitions of political parties and objective economic difficulties, foreigners destabilize the situation in the country.

In total, by February 25, during the confrontation between the opposition and the Venezuelan authorities, 13 people died, and 149 were injured. The most affected were Tachira, Sucre, Merida, Lara, Carabobo and in the capital Caracas. Law enforcement agencies are investigating each of the killings. February 21 arrested several civil servants involved in the death of the first three people at the beginning of the confrontation.

However, the rebels are not reassured. On the contrary: the incidence of attacks on the police increased. Detained militants withdraw cold weapon, incendiary bottles and even improvised explosive devices. Some demonstrators take to the streets with firearms - now and then in Caracas there are gunfights between the police and opposition supporters.

Meanwhile, the authorities achieved their first success - Leopoldo Lopez, the leader of the organization “Narodnaya Volya”, was arrested. He is suspected of organizing mass riots: it is known that the oppositionist cooperates with the CIA and calls for the destruction of the political system in Venezuela. Lopez has longstanding connections with America: he studied at Princeton Gun School in New Jersey, Kenyon College of Ohio and at Harvard School of Management, receiving a degree in public policy.

It turns out that the “revolutionary” has quite good connections in the United States, and, apparently, he actively uses them.

In his views, Leopoldo Lopez is close to the Social Democrats, and in 2000-2008, being the mayor of the municipality of Chacao, he built his policies based on the ideals of right-centrism and the principles of social democracy. However, in recent times it has often been compared with the National Socialist - according to many observers, the Narodnaya Volya organization headed by him puts forward too far-right slogans.

Lopez left politics suddenly - he was accused of corruption. The future “revolutionary” filed a lawsuit with the Inter-American Court of Human Rights demanding the return of the right to participate in the political life of the country and won the process, but was unable to return to the post of mayor.

The United States does not refuse to support extremists

Of course, the arrest of Lopez became an important event in the political life of the republic, but did not lead to a reduction in violence: the disgraced politician called on the militants not to surrender and continue the fight. The day after the arrest of the leader of Narodnaya Volya, several quarters of Caracas were occupied by extremists with the support of tens of thousands of demonstrators who, obviously, in the event of clashes, would be used as human shields, without knowing it themselves.

At the same time, the aggravation of the situation in San Diego, where the police used tear gas to disperse protesters, tried to calm the uncontrollable crowd by firing rubber bullets. But the inhabitants of Tachira had the hardest thing: the landing battalion was sent there to ensure order.

In contrast to Leopoldo Lopez, the moderate opposition urges the rebels to lay down their arms. For example, Enrique Capriles did this - a former opponent of Nicolas Maduro in the presidential election. Capriles wants to preserve his political reputation, and therefore seeks to distance himself from the rebels.

Last week, three American attorneys were expelled from the republic, performing the functions of diplomats and suspected of inciting mass riots.

Also, as a preventive measure, Nicolas Maduro banned the broadcasting of the Colombian television channel NTN24, which in recent days has become the “mouthpiece of America” in the region, and canceled the accreditation of CNN journalists - everyone knows how American reporters “cover” events in the world. The President expressed his dissatisfaction with the work of the France-Presse agency, which blackened Venezuela in its reports.

John Kerry and Barack Obama have already expressed their concern about this. In particular, the head of the United States called on Nicolas Maduro to release the detained militants - which, however, is a traditional demand.

In response, Maduro proposed to resume diplomatic relations between the United States and Venezuela, broken off in 2010 during the reign of Hugo Chávez. According to the current Venezuelan authorities, Barack Obama does not have such powers to interfere in the affairs of sovereign states and directly demanded something from other countries in circumvention of diplomatic departments. Foreign policy is the prerogative of diplomats, let the president bring order inside his country.

Nicolas Maduro intends to hold a revealing dialogue with the US envoys, telling Venezuelans about the true intentions of the United States and the goals pursued by Washington in Latin America. Washington is in no hurry to support his idea: what if the extremists succeed in gaining power in their hands, as happened in Ukraine? It seems that despite the stubborn resistance of the Venezuelan society to foreign influence, the reliance on the power scenario is still considered as the main one, and the States are not going to give up their aggressive policy.