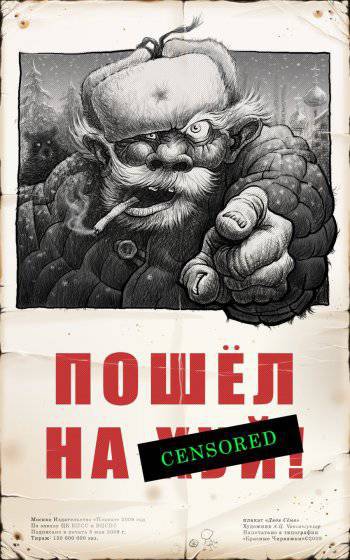 They often ask: could it be otherwise in Ukraine? I answer: it could. But only in two cases: if the former government had changed its policy and did not fuel its attitude towards itself with total hatred. Because of the greed and offensive arrogance of its individual representatives. Due to excessively overgrown corruption. Because of the stupidity and lack of foresight of the officials of the highest level. Because of the monstrous lack of professionalism of leaders of all levels, selected on the principle of either meeting the ambitions of the oligarchs, or personal loyalty. The authorities did not want to change anything. So it could not ...


The second saving case: if the regime of Yanukovych could build more or less even relations with the West, and with the United States, and with Russia, and not to rush between them, as in the song of the Russian group "HZ" ("X ... d knows"): "Great is the old Russia / From the end to the edge, / I probably obosr, / Place choosing."

Here is the regime and managed it. To complete. He rushed about in search of the most profitable integration for himself. And I didn’t want to notice that, moving away from Russia and ostensibly euro-integrating, he still goes to meet the coup that the United States and Europe had been preparing for 2015 year. The coup was successful a year earlier. In peak of Russia. But this testifies not so much about the strength of the putschists, as about the total weakness of the overthrown, rotten, rotten, eaten away from the inside regime. After the defeat in 2004, he naturally came to defeat in 2014, because he was even worse than the French Bourbons, who were talked about at the beginning of the 19th century: “They did not understand anything and did not learn anything” ...

And this is characteristic: even harsh, violent suppression of protests in the bud would only put off the putsch, but without changing the approaches to governing the country, the economy and the life of society, it would not kill at the root the desire to do it. The mobilization model of the housekeeper, in which all the problems of the country are shifted to the entire population according to the principle “from every penny to the state - a full budget”, and a separate, very narrow stratum (oligarchs) eats, drawing from this budget, invariably generates universal envy and hatred. And envy and hatred are, as you know, strong feelings capable of mimicking, but not leaving forever. In this regard, they are even stronger than love. And it was not about love at all ...

And now they are also asking about whether the participants of the Stop Censorship movement after the victory of the putschists could not or not call for lustration of their colleagues in the journalistic workshop (for me personally, the “freeze-takers” are colleagues in the workshop only formally, I do not consider them to be journalists at all , and according to the mind, and by the nature of the activity) and to the introduction of strict censorship and in fact a ban on the profession. And here is the answer: they could not. And not at all because the “stop loaders” also liquidated themselves, showing their true face and substituting their owners and sponsors. This is pure self-disclosure: people who credited so much money allegedly to fight the censorship of the Yanukovych regime, enriched themselves with this, in fact, it turns out, only served as information support for the upcoming and ongoing creeping coup. And as soon as he was crowned with success, the “fighters against censorship” themselves acted as avengers and chief censors.

And it’s understandable that if the grantors from Europe and the USA don’t get stuck on their presumptuous and insane ideas about the existence of uncensored mediums of lackeys, it will become obvious that these are the “fighters” in Ukraine that are needed. Not the freedom of speech and opinion, not the carriers of another point of view, but the total consensus of the mind, and it is the censors who muffle the dissenters. As they say, hurray, sailed. But the West is silent. And his journalistic organizations, for grants fighting for the rights of journalists, are also. Because, it seems, the West needs just such “fighters” in the country, which they have identified as a controlled testing ground for their geopolitical games. At such a testing ground, pluralism is not needed at all, it only hinders, stirs the minds of the “slaves” ...

And here three more lessons of the coup are opened, concerning the behavior of those who from the government and from its opponents participated in it on both sides of the barricades. First: unequivocally, the authorities defended and people struggled with the authorities with the exaggerated compensatory motivator. Those who wanted everything at once, and quickly. The power was carried out by those who were “lucky” and who had already seized and robbed in the black. And those who from “no one” wanted to very quickly become “everything” fought against it. Remember from the proletarian hymn: "Who was a man, that will be all"? This is the very thing. It sits in each of us. It spoils the soul with unrealistic hopes that luck will come some day (inheritance, winning the lottery, finding it on the street), and everything will change dramatically without hard, everyday, painstaking work. Well, who does not want this? Everybody wants. But some work, while others stupidly and lazily waiting for luck.

And terribly angry at everything and at all for the fact that she, luck, does not come. That there is no money. That someone has a better wife and a better dacha, a bigger apartment and a better salary. That someone is more talented and luckier. Envy is a terribly powerful, but destructive engine. And this is the psychology of life, and not someone's fabrications.

The desire for rapid compensation for their own failures, but at the expense of others - this is the main engine of the masses in any revolution and in any putsch to which the people are connected. Revolutions are conceived by geniuses, carried out by fanatics (romantics), and villains (crooks, scoundrels) use their fruits. So they said whether Otto von Bismarck, or Thomas Carlyle, or both of them came to this idea in parallel. But it is not important. It is important that this expression has nothing to do with the current Ukrainian coup. In our coup there is no other idea than seizing power and compensation for our own "loss" from the newly acquired "trough." This means that the political strategists, organizers and sponsors replaced the geniuses in it (there were a certain number of them on the Maidan), and they turned into fanatics and villains everyone who stormed the government quarter and who eventually settled in it.

I will not dwell on specially trained and trained militants - let those who need them deal with them. Or those who should (if they still remain in Ukraine). Let's talk about another, as Yulia Tymoshenko used to say, “biomass”, which accompanied the fighters and made up the striking force of the so-called “euromaidan”. Homeless people, urban unemployed, rural residents who have lost all sorts of landmarks, occupation and hope, irritated intellectuals, always dissatisfied with their status and any authority, students, students of schools, colleges and vocational schools, who have little to shine in the future. For example, I see these slender ranks of the disgruntled or, as they came up with in Russia, the “angry” Kiev citizens: children and grandchildren of peteushnikov, torn out of the village with the “top of the hut” lost forever, who received higher education and status (journalists, economists , lawyers, engineers, managers, etc., etc.), but never became status and wealthy people-citizens of their country. Moreover, given the oligarchic-mobilization management of Ukraine, they even lost hope that in the future something would change for the better. The coup suddenly became such a sudden hope for them to change something ...

Second: from this desire to compensate for their former dissatisfaction with all these excesses with the seizures of the "winners" of private estates and homes of those in power and showing how they lived. The “Vanquished”, of course, were no longer seen in personal enrichment. They rowed everything that came to hand, and arranged on their estates really kitschevo-“patrician” tribal ersatz-nests. With swimming pools, peacocks, rare cars, own portraits of the work of fashionable authors (such as Sergey Poyarkov), helipads, private beaches and boats.

a) the search for “Yanukovych’s golden toilet bowl” in his country residence Mezhyhirya was the pinnacle of the fight against such excesses. This plebeian and red-blooded blunder in its pure form, caused by the elementary not only populism of technology (to evoke an understanding of the impoverished crowd and its hatred for the regime: “yyyyy, you bastards, they live on our lives”), but also envy. And the eternal desire of the slave to peep into the keyhole, as the bar-owners eat, fuck and, sorry, go to the toilet. Vile desire, but very productive for inciting "revolutionary" moods;

b) if they began to compare the estates of those who are now “pulling it off” and those who are replacing them, they would not have found a big difference. And especially!!! - they will not find in a year, when the “winners” will seize up to the “trough” and Malekh will have it in their pockets. Everything either is, or will be the same. As some Viktor Yushchenko used to say, stumbling to power, the president is not living in a doghouse ...

Third: the problem of the “former”, sorry for the involuntary tautology, was that they did not want to believe in the inevitable punishment for such an attitude towards themselves, towards the country and towards people. They were told: “there are no pockets in the coffin”, “you cannot take everything to the next world (option to emigrate),“ you can’t get to the airport ”,“ you can’t take everything away when you come under the door with forks ”and so on. etc., etc. "Former" did not believe. And now on their chambers lead tours drooling with envy and lust of the crowds. And the nastiest “field commanders” are already dragging their belongings into their “nests”.

And you know why? Because the "winners" have already become infected with the "unbelief of the former." They, too, are already confident that they have come forever, which means that rookeries need to be equipped according to the first category. As their idea of ​​luxury, coziness and comfort tells them. And where could they learn this? That's right: on excursions in "Mezhigoryu". In search of a golden toilet ...

... Therefore, when today the newest “expropriation of the expropriated” is rolling around the country, I would like to remind one more song of the same group “HZ”:

A well-known Russian journalist with Ukrainian roots Sergei Dorenko on this occasion once argued on Echo of Moscow radio: