Dish of the season: Chicken Kiev with credit sauce

February 27 2014
106
Representatives of the so-called new Ukrainian authorities decided to count how much financial resources Ukraine needs, if not “for complete happiness,” then for patching all the holes that gape in the country's economy. Acting head of the Ukrainian Ministry of Finance (ministry, excuse me, why? ..) Yuri Kolobov and colleagues counted that the treasury in the coming years will need as much 35 billion dollars. To these calculations, an unambiguous addition was made by the Acting Head of the Ministry of Energy Edward Stavitsky. Mr Stavitsky said in an interview with Reutres that in order for Ukraine to overcome the economic crisis, the price of Russian gas (which Vladimir Putin and Viktor Yanukovych agreed not so long ago) should not change, despite changes in power. And this, remarkably, against the background of statements by other people who declared themselves “new authorities of the country” that Ukraine is not going to pay Russia a penny for the gas already consumed (the amount of Kiev’s debt to Moscow for gas alone is more than 1,6 billions of dollars ). An interesting thing, it turns out: we ourselves are “fire victims”, and therefore give money, give cheap gas, give, give, give ... And despite the fact that we will not pay for past deliveries, because Moscow has negotiated with another government about them ... truly "holy" simplicity ... 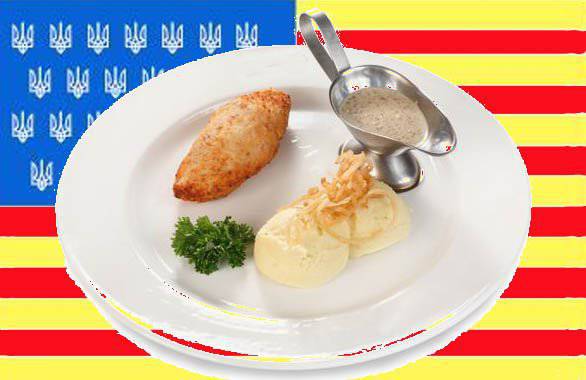 Against the background of the monstrous economic crisis in which Ukraine has plunged, there are also “smart” statements about where to take the 35 mentioned above billions of “gray-green”. One of those light heads, through whose mouth the idea of ​​a financial donor for Ukraine appeared to the world, is the head of Arseniy Yatsenyuk. Yes, yes, the same Arseniy Petrovich Yatsenyuk, who, in his 30 with a small one in the government of Yuriy Yekhanurov (during the presidency of the unforgettable Viktor Yushchenko), already ruled the Ukrainian economy as minister. And then, it must be admitted, Arseny Petrovich did not differ in the breadth of ideas about the transformation of the Ukrainian economy, and now he doesn’t differ either, although from short orange pants of a Komsomol member he seemed to have grown up ... Well, is it not ingenious? .. Of course, it is ingenious, if we also take into account that today's aggregate national debt of the country has exceeded a billion dollars for 73.

After the Ukrainian “rulers” began to practice calculating the volume of funds needed by the Ukrainian economy, “friends of Ukraine” from among Western politicians began to think about “finding reserves” - true, for the most part - on the side. Some pointed at Russia with a finger - they say, Moscow could have thrown billions ... dtsat "free Ukraine". Others (for example, the Polish "friends" in the person of the foreign minister, who often himself looked at the Maidan), said that Ukraine could be helped by capital owned by the "former" authorities. Chief Polish diplomat Radoslaw Sikorski, in particular, noted:

It seems to me that, since the Ukrainian parliament nationalized this disgusting Yanukovych villa, he should take a closer look at other assets of the ruling elite. This should also be a source of support for reforms in Ukraine.

A huge responsibility lies with some EU member states, whom we have been persuading for weeks to do something with this property, which everyone knows are stored in Western accounts.

ABOUT! Yes, Mr. Sikorsky, it turns out, is a socialist and a Bolshevik: the expropriation of the expropriators and all that ... And they say that the real Bolsheviks are now extinct in Poland ...

Immediately after the congenial idea of ​​Mr. Yatsenyuk, representatives of the IMF, which was "mentioned in vain", were gathered in Ukraine for Ukraine. IMF Managing Director Ms. Lagarde said that the foundation’s mission is almost on suitcases sitting and waiting for Ukraine to officially (and not only through Yatsenyuk’s considerations) call on her to monitor the situation. Christine Lagarde noted that financial assistance to Ukraine can be allocated through the IMF channels only if the Ukrainian government is finally formed.

Well, here Mrs. Lagard is precisely cunning. Indeed, besides creating a new government, the IMF expects something else from Ukraine and something else ... So what? This question has a clear answer to the resource. WikiLeakswhich at the end of last year published a complete list of the requirements of the International Monetary Fund to Ukraine, which are the conditions for granting that loan. WikiLeaks unveiled a correspondence between representatives of the US State Department, who gave IMF “advice” on how its leadership should act when considering the request of the Ukrainian authorities for a loan. In addition, WikiLeaks published materials that shed light on the fact that Ukraine’s American diplomatic mission in Kiev also actively provided its services in communicating information about the need to fulfill the requirements of the IMF (read: the United States).

WikiLeaks, to which, to put it mildly, certain claims in the United States itself, publishes the following list of IMF requirements for Ukraine (it can be assumed that these requirements are unlikely to be revised compared to the end of last year):

1. Raising the retirement age for three years for women and two for men. Eliminating the rule of double experience when working at hazardous facilities.

2. Setting the retirement age for army officers at 60 years. Refusal to pay pension benefits to scientists, employees of state enterprises and other categories of citizens.

3. The increase in electricity prices for the end user over the next year by 40%. The increase in gas prices on 50% for municipal enterprises and almost twice for individuals. Increasing excise taxes on gasoline.

4. Decide on the 50% increase in transport tax. Freeze a living wage. The use of opportunities exclusively point subsidies.

5. The abolition of state support in the organization of school meals, the purchase of textbooks.

6. Full privatization of the coal industry.

8. Setting the maximum payment for sick leave - 70% of salary, paying b / l from the third day of illness.

9. Reducing the composition of the bureaucracy, bringing the number of ministries to 14.

10. Restriction of salaries of state officials.

If the last couple of points hardly anyone, except the state officials themselves, would cause criticism, then all the other points are more like a financial dictate, to tighten the belts around your neck ... Although we should not forget that we are still talking about a loan , and not about the gift, but only in how to arrange state credit bondage and the IMF, and even more so his puppeteers in Washington are well aware - it has been worked out in practice more than once. Does something in the IMF Russia decide with their 2,7% of votes? - the question is rather rhetorical ...

"Help" on its own terms, Ukraine offers not only the IMF, but also gentlemen from the European Parliament. For example, MEP Elmar Brock promises that the EU will allocate as much 20 billion euros to Kiev if that (Kiev) presents an economic “development plan” based on tariff increases for enterprises and the population. Translated from the European diplomatic-economic to human, it means something like the following: present us a plan for how you are going to survive if you swallow a capsule with poison, and we laugh ...

Ctrl Enter
Noticed oshЫbku Highlight text and press. Ctrl + Enter
We are
Results of the week. “But is it not enough in Pedro in Brazil ?! And do not count! "Hit menu: Chicken Kiev, original recipe
Military Reviewin Yandex News
Military Reviewin Google News
106 comments
Information
Dear reader, to leave comments on the publication, you must sign in.