February 27 2014
138
The political crisis in Ukraine has entered a new phase. The euphoria of the “victory” of the Maidan clouded the heads of even those who initially tried to soberly assess the situation in the state. Where the fog cover is partially dissipated, the true state of affairs is overlooked: the catastrophic situation in the economy, the absence of any social guarantees, anarchy, the reluctance of individual regions to recognize those who have declared themselves rulers of Ukraine with Bandera tridents.


So far, Kiev is peering at the gaping and stinking hole of rubber, while “opposition leaders” are trying to figure out how to legitimize themselves against the background of complete delegitimization of political space in the country while monuments are falling, while the gathering, which calls itself the Ukrainian parliament, has turned on a “mad printer” ”, Giving birth to laws (one“ more beautiful ”than the other), the country continues to economically and ideologically spread.

Some regions of the south and south-east of the country are in a state of siege. The residents of these regions, realizing that in most cases the representatives of the authorities remaining “since Yanukovych’s time” are full of desire to recognize the reddened Rada, have come up with their own initiative - to resist chaos and anarchy that are spreading across Ukrainian territory under the guise of democratic accomplishments. People understand that people who start their way in power with the launch of a repressive machine, with a war against memory, with attempts to deprive national minorities of rights (first of all, Russians (about 18% of the population)) are not able to build an effective policy by definition.

A number of Ukrainian regions actually announced a national mobilization, the creation of local self-defense forces capable of defending the constitutional order that was destroyed with the active support of ultranationalist gatherings. 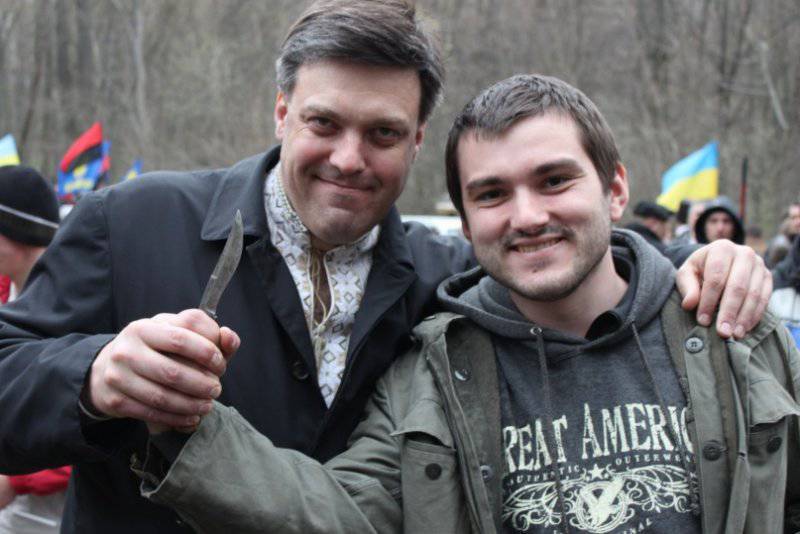 In the city-fortress turns Sevastopol. In the city at the people's assembly elected mayor - a citizen of Russia. Above the building of the Sevastopol administration raised the Russian tricolor. Checkpoints appeared around the city. Everything that is happening in the hero-city of the new "authorities" of Ukraine has already been called a manifestation of separatism ... And here these new "authorities" need to convey details about the status of Sevastopol, which the Ukrainian authorities tried to keep silent about since the year 1991.

Despite the fact that Sevastopol (along with the agglomeration) is located in the Crimea, it is not included in the ARC (Autonomous Republic of Crimea). Sevastopol, as it is called today in Ukraine, is a city of national importance. But whose government subordination? De facto, many are accustomed to the fact that - “naturally” Ukrainian, because in 1954, Nikita Khrushchev transferred the Crimean region “for use” of the Ukrainian SSR. He gave the Crimean region (on what grounds the questions remain), but the fact of the matter is that Sevastopol was no longer part of this region. By the decree of the Presidium of the Supreme Soviet of the RSFSR as early as October 1948, Sevastopol was withdrawn from the Crimean region and turned into a city of republican subordination (subordination of the RSFSR, that is, Moscow). Until the collapse of the USSR, financial and management activities in Sevastopol were carried out without the participation of Kiev - under the direct supervision of the Council of Ministers of the USSR. In other words, Sevastopol is still de jure a city that is a Russian enclave on the territory of Ukraine. Of course, such legal nuances bring the brownish Rada to a white-hot, and the new Ukrainian “authorities” have another wish to step through all the legal foundations of statehood. Will silushki be enough? ..

From the answer to this, the forces of people's self-defense, wishing to resist the brown threat, today appear not only in Sevastopol. The camp of the people's militia in Kharkov, Lugansk, Donetsk, Kerch, Simferopol began to work permanently.

It is noteworthy that the appeals to help the Russian brothers in Ukraine reached Russia. Immediately, several Russian public organizations took the initiative to form volunteer detachments that will provide all possible assistance to residents of the eastern and south-eastern regions of Ukraine. One of these movements is the Eurasian Union of Youth, which in Rostov-on-Don and other cities began to compile lists of all those that cannot remain indifferent to the neo-Nazi insurgency that revealed itself in Ukraine. Appeals for Russians are coming from the Ukrainian side. Crimea, Kharkov, Donetsk and other regions are asking their blood brothers on the other side of the Ukrainian-Russian border not to leave them alone with the brown militants.

From the slogan of the “Eurasian Union of Youth”:

Under siege Kharkov, Donetsk, Sevastopol. Their inhabitants are ready to stand to the end. If we protect them, we will defend Russia as well, preventing the fire of war on our borders from spreading, which will inevitably spread to us. Currently, volunteer detachments are being formed, which should go to the East of Ukraine to restrain the forces of militants.

The Tyumen cell of the Eurasian Movement also comes out with an appeal to render all possible assistance to the Russian (in the broad sense of the word) people with whom the neo-Nazi groups, which declare themselves the “Maidan militia,” are trying to settle accounts. The coordinator of the Tyumen branch of this organization publishes a link that can be followed to complete the questionnaire. This one link. The questionnaire is called “Civil Defense of Ukraine. Mobilization".

The intensification of movements that are aimed at helping to counter the Bandera trash (this is the definition that the “Eurasian Movement” gives to those who today want to define themselves as legitimate Ukrainian authorities) manifested itself even after the official announcement of the Russian authorities about non-interference internal affairs of Ukraine.

The Russian Foreign Ministry said that the Russian Federation will not interfere in “internal Ukrainian” affairs and expects the same from others. It would seem that from the point of view of international law, the position is reasonable. But her rationality turns to dust, if you look at the situation without diplomatic rose-colored glasses. First of all, what kind of “non-interference of others” are we talking about, if all those who are not lazy about European politicians walked along the Maidan? Secondly, what kind of “intra-Ukrainian” affairs are these, when on the territory of Ukraine, at least, every fifth is ethnic Russian, and, again, at least two thirds of the population is Russian-speaking? Will such a policy of distancing Russia lead to a repetition of the famous Serbian scenario? ..

I would like to hope that the statements of the Russian Ministry of Foreign Affairs are a political bluff (well, diplomatic deception) that was qualitatively placed on Russian soil, which the same West has been famous for in recent years. If this is true, then the Foreign Ministry should be consistent in its statements, continuing to methodically declare non-intervention, even when the consolidated Russian world knocks out the teeth of the neo-Nazi "gangster" calling himself the new "power".

By the way, after some articles on the topic of the coup in Ukraine, some readers had a question for the “Military Review”: they say, why do you call this people Maidan neo-Nazis, Bandera, brown, etc. They say that there is “just a handful” of neo-Nazis, and the rest are simple hard workers, who have been corrupted by the arbitrariness of the authorities. Like, stop mixing the sinful with the righteous ...

Well, the fact that quite sober forces were initially present on the so-called Euromaidan, no one is going to deny. Although, frankly, it is difficult to imagine an “honest hard worker” who instead of working at a machine tool, in an office, in a medical room, at school, in a workshop, spent months sitting around a metal barrel with burning firewood, broke a stone blocks and ate bread from the hands of the American “savior” . A hard worker needs to be fed.

Moreover, doubts have arisen in the soundness of these forces after the Maidan went about the outright militants and radicals who had committed anti-constitutional actions, violating the armistice agreements reached between the authorities and the opposition. Concerning the soundness of these forces, doubts arose even after such pearls “Who does not jump, he is Moskal!”, After the start of their war with silent monuments, after an overwhelming desire to encroach on the Russian language, after paintings in which these people rejoice at the sight of a bloody berkutov “With a gouged eye, after ideas about banning parties. If people support the actions of neo-Nazis and Bandera shortages, calling themselves “the lights of freedom”, then who are these people turning into? - yes, all those same neo-Nazis who are trying to whiten themselves with speeches about fighting corruption and building a fair state. Against popular wisdom you will not go: "Tell me who your friend is, and I will tell you who you are."

Ctrl Enter
Noticed oshЫbku Highlight text and press. Ctrl + Enter
We are
War against history. Militants "IG" destroy cultural monumentsSituational analysis of the death of the MH17 flight (Malaysian Boeing 777), made on the basis of engineering analysis from 15.08.2014
Military Reviewin Yandex News
Military Reviewin Google News
138 comments
Information
Dear reader, to leave comments on the publication, you must sign in.