Machine gun with a gentle name 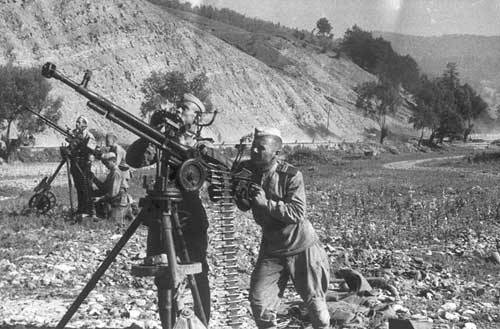 Became a formidable means of dealing with the enemy in the air, on land and at sea

Among the various nicknames that are given to samples. weapons in the army, there is a very peaceful - "Dushka". So soldiers transformed the abbreviation DShK, belonging to a very serious large-caliber machine gun.

History domestic heavy machine guns originated 27 October 1925, when the USSR Revolutionary Military Council proposed the Artillery Committee of the Red Army Artillery Directorate to 1 May 1927, to develop a machine gun caliber 12-20 mm. In the design bureau (PKB) of the First Tula Arms factories, under the leadership of I. A. Pastukhov, they created a machine gun based on the 12,7-mm cartridge "Vikkers" and the design of the Dreyze light machine gun with magazine supply. The sample received the designation P-5 - "5-linear machine gun" (i.e. X-inch caliber 0,5).

A new cartridge with an armor piercing bullet appeared in 1930, and at the end of the same year, the first prototype of a large-caliber Degtyarev machine gun with a flat disk design by A. S. Kladova with a capacity of 10 million was assembled at the workshop of the Bureau of the New Structures and Standardization. Xnumx ammo.

In February, 1931 of the year passed tests of two 12,7-mm machine guns - “Dreuze’s system for manufacturing TOZs on the Prilutsky machine and Degtyarev systems on Kolesnikov’s machine”. The commission that conducted the tests gave preference to “Degtyarev large-caliber” (DC) as being easier and simpler to manufacture. DK was commissioned, the production of small series began at the plant number 2 in Kovrov in 1932 year, but in 1933-m only 12 pieces were assembled, and in 1934-m production of Degtyarev-large-caliber was suspended.

The fact is that troop and additional ground tests of the DK in 1934 showed that the machine gun was unsuitable for combating fast-moving targets due to insufficient combat rate of fire caused by a low rate of fire, heavy and cumbersome shops. In 1935, the DK issue was completely stopped.

In 1937, G.S. Shpagin created a drum feed mechanism for a metal tape of an ingenious design, which did not require a substantial rework of the machine gun itself. In April, the 1938 machine gun with tape feed was successfully tested at the plant, 17 December - passed the test sites, and 26 February 1939, by the decision of the Committee of Defense at SNK of the USSR, adopted it as “12,7-mm heavy machine gun of the 1938 model, DSHK "(" Degtyarev-Shpagin large-caliber ").

Automatic machine gun operates by the removal of powder gases. The gas chamber of the closed type is equipped with a regulator with three holes of different diameters — the permutation of the regulator changed the amount of powder gases discharged to the gas piston. The fins for better cooling are made along the entire length of the barrel; a single-chamber muzzle brake of the active type is mounted on the muzzle of the barrel. The barrel was first supplied with a “parachute-shaped” muzzle brake of the active type, subsequently replaced with a flat-shaped brake.

The leading link of the automation is the slide frame. Locking the barrel is made using the lugs bolt, bred to the side. Return-combat spring is put on the gas piston rod. There are two spring dampers in the backplate, softening the impact of the bolt carrier and the bolt at the rearmost point. Dampers give the frame and bolt the initial speed of the return movement. This increased the rate of fire, but required the introduction of a counter-rebound device to prevent the frame from rebounding after impact in the extreme forward position.

The reloading handle is rigidly connected to the slide frame. The machine-gun reloading mechanism interacts with it, but the machine gunner can use it directly, for example, by inserting a cartridge cap with a cap.

The shot is made from the rear sear (from the open shutter). The trigger mechanism allows the maintenance of automatic fire only, is equipped with a flag non-automatic safety device that blocks the trigger lever and prevents the spontaneous lowering of the sear.

When the gate approaches the breech breech, it stops, and the bolt carrier continues to move forward. The drummer connected with it, with its thickened part, moves forward and spreads the lugs for the bolts, which are included in the corresponding receptions of the receiver. After locking the barrel bore, the bolt carrier continues to move forward, in the extreme forward position, the bolt bar driver strikes the striker mounted in the bolt. The reduction of the lugs and the unlocking of the bolt are made by beveling the bolt carrier when it is moved backwards.

Power supply with cartridges tape, with the left giving of a metal link tape. The tape consists of loose open links and is placed in a metal box, fastened to the installation bracket. The DShK's drum receiver is driven by the bolt carrier and, moving backward, it bumped into the fork of the swinging arm-feeder and turned it. The dog at the other end of the lever turned on the 60 of the drum, which stretched the tape. Removing the cartridge from the link tape - in the lateral direction. 12,7-mm cartridge has several options - with an armor-piercing, armor-piercing incendiary, sighting incendiary, sighting, tracer, armor-piercing incendiary tracer bullet.

For firing at ground targets, it is a folding frame sight, notched at a distance of up to 3500 m. The ZNXX model's antiaircraft ring distance sight served for firing at airplanes flying at speeds up to 1938 m. Later, the machine gun received a simplified sight of the sample 500 of the year: the firing range has decreased to 2400 m, but the target’s target flight speed has been increased to 1941 km / h. Then came the perspective anti-aircraft sight of the 1800 model of the year, which allowed firing at any course of the target, including diving or pitching, reflecting the experience of dealing with aircraft attacking at low altitudes.

Tripod in position for anti-aircraft shooting was not sufficiently stable. A special anti-aircraft gun with guidance mechanisms and a more convenient position of the sight would, of course, increase the effectiveness of anti-aircraft gunfire, but such installations did not go into the series. A number of integrated anti-aircraft installations were developed. Restrictedly used, for example, 12,7-millimeter built. The difficulties of their creation were primarily related to the power supply system - with the existing scheme, it did not allow, without significant alterations, to switch to feeding the tape from the other side. 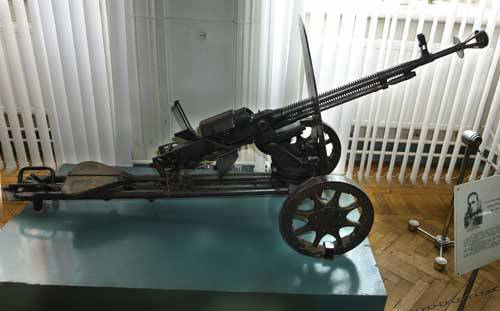 IN MANUFACTURING AND IN FIGHT

In the first half of 1941, the 234 DShK was released, although the overall plan for this year was 4000. The Navy had 830 machine guns at the beginning of the war, and in the course of the war he received 4018 units from industry and another 1146 was transferred to the fleet from the Red Army. And if the army and navy were sometimes provided with light and heavy machine guns, even beyond the state, then there was a clear lack of large-caliber weapons.

It is not by chance that in the first three months of the war, the release of large-caliber machine guns grew fivefold. The main production of DShK at factory No. 2 was duplicated in Kuibyshev, where 555 machines and accessories were transferred from Kovrov. We tried to reduce manufacturing costs: if 1941 needed 210 workers for 100 units to produce large-caliber machine guns, 1943 was required for 110 units. And if in the first six months of the war, the Armed Forces received XTC from the industry, and for the entire 1400 year, 1942 received 7400, 1943 14, 400 1944 in 14, and 800 in the first half of 1945.

The main role for large-caliber machine guns was the role of anti-aircraft installations - both in military air defense, and in the air defense system of the country, air defense of naval bases, etc. However, large-caliber machine guns were also used in the fight against ground targets. In the orders of the initial period of the war, when the German troops still widely used light Tanks in combat units, one can often find instructions on the "involvement" of heavy machine guns in the fight against tanks. Later, we also repeatedly see recommendations on the installation of DShK at the positions of anti-tank units, but already to protect them from attacks aviation enemy from low altitudes.

Fire on manpower and firing points DShK often led in urban battles. In the fight against the enemy, entrenched in fortified buildings, a large-caliber machine gun was often more effective than a machine gun of a normal caliber - due to the larger penetration effect of the bullet. This, for example, led to their use to support the actions of assault groups.

DShK played the role and tank machine gun. In 1939, it was the main armament of light tanks T-40 and T-40С, in 1942-m it was placed on light armored vehicles BA-64Д. In the 1944, the 12,7-mm turret anti-aircraft gun appeared on the IS-2 heavy tank. Heavy self-propelled guns of the ISU series were equipped with DShK turrets for firing at air and ground targets.

We must admit that the production of DShK in the conditions of war could not be deployed in accordance with the need. For comparison: in the United States over the same period, more than 400 thousands of 12,7-mm M2 machine guns of the Browning system of several modifications were launched. Therefore, when organizing supplies under Lend-Lease, we paid considerable attention to large-caliber machine guns and machine-gun installations.

By the way, the German army, which did not have regular large-caliber machine guns, readily used captured DShKs, to which the Wehrmacht Army Armaments Administration assigned the designation MG.286 (r). Also a confession.

At the end of the Great Patriotic War, K. I. Sokolov and A. K. Norov conducted a substantial modernization of the DShK. First of all, she touched the power supply mechanism - a slider came to replace the drum receiver, which simplified the change of the tape feed direction from left to right. In addition, the manufacturability, survivability and reliability in work have improved, and the barrel mount has changed.

The first 250 modernized machine guns were released in February 1945-th at the plant in Saratov (there, as in Kuybyshev, back in 1941-m, part of the production of the Tula machine-building plant was evacuated). In 1946, the machine gun is adopted under the designation "12,7-mm machine gun rev.1938 / 46 of the GDQM" (despite the replacement of the receiver, the name Shpagin in the brand of machine gun was rightly preserved).

DShKM immediately became a tank anti-aircraft machine gun (DShKMT) - they were equipped with a series of tanks IC, T-54 / 55, T-62, BTR-50PA, upgraded ISU-122 and ISTU-152, special machines. He is one of the most widespread large-caliber machine guns in the world, along with his long-standing rival, the American 12,7-mm Browning, an 2-N American machine gun. DShKM is in service with more than 40 armies in the world. In addition to the USSR, it was produced in Czechoslovakia (DSK vz.54), Romania, China (Type 54 and modernized Type 59), Pakistan (Chinese version), Iran, Iraq, Thailand.