Mikhail Leontyev: “There are no circumstances that allow Ukraine to avoid civil war” 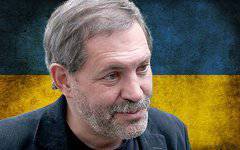 West loves to betray his lackeys, but Yanukovych is not touched


In Ukraine, everything goes smoothly, as it went. This is called "the collapse and degradation of the Ukrainian state." Each of the participants in the process introduces its own identity. Tymoshenko will now introduce a lot of originality, and before that, Yanukovych introduced an identity. At one time, Kuchma found the only person in Ukraine who might not win over Yushchenko. Actually, this was his task, and he almost coped with it.

After the so-called “Orange Revolution”, the customers of the Ukrainian project, that is, the “Washington Regional Committee”, realized that this was a unique frame, and decided to use it.

Yanukovych is a man who was supposed to disavow and disorganize the pro-Russian South-East of Ukraine. He did it. All real figures who could lead the pro-Russian “anti-Maid” process were intimidated, expelled and imprisoned. I, in particular, mention Igor Markov, who is still sitting. He went to jail for hitting Bandera’s face. Moreover, it was seven years ago, and now Bandera has been amnestied several times, immediately after their shots at Berkut.

I think no serious reprisals threaten Yanukovych. Yes, the West loves to betray its lackeys, but Yanukovych is not touched if they are in control of the situation.

Moscow’s position is worthy, but not claimed by anyone

We now turn to the Russian position. She is unique. There is an ideology of legitimacy that emerged in the time of Nicholas I. We then defended legitimate political systems, that is, the legitimate authority of European monarchies, saving them one after another. They were vicious enemies of Russia who used our help to stick a knife in our back during the Crimean War. But Nicholas I was a romantic and idealist, and I think Vladimir Vladimirovich is pragmatic, so if Russia demonstrates legitimacy in the foreign arena, then this is the best cover for our policy.

I would like to see this policy, but it is not yet visible. I am extremely bad at revolutions, but no matter how I treat them, I must admit that to remain in the legal field means to be alone. No one except Russia acts in the legal field: neither the opposition, nor the West, nor the radicals, nor the Eurocentrists — no one. In the legal field the wind whistles, and Russia walks there without meeting anyone. The position of Moscow is worthy, but not claimed by anyone.

In Ukraine, the collapse of a non-subject state is underway. The “Ukrainian Winter” was provoked by the same guys as the “Arab Spring”. They acted according to the principle "we will demolish power, and then we will figure it out." But for this you need to have actors who are then able to deal with the situation. In Egypt, unlike in Ukraine, there is a state and an army. In Ukraine, there is no state or army, and it is impossible to drive the Nazis back.

These people will not leave. They do not care - that Tymoshenko, Yatsenyuk, that Klitschko. This is a dirty foam that cannot fall. They will not return to their jobs to work as loaders and sellers in tents, and so on. This is not the oligarchic capital, which rolled itself dough and moved away. These are the real fascists, the Nazis not only from the point of view of ideology, but also from the standpoint of social mentality, that is, pure lumpen. With them nothing can be done. This is a political verdict, and there are no circumstances in which Ukraine can avoid civil war.

Maybe the civil war will be local. Power in the western regions captured by the Nazis, now it will try to legitimize. How to reconcile the South-East, it is impossible to understand. Previously, the circumstances that allowed to do this were connected with the personality of Yanukovych. He created the conditions under which the Southeast was physically, morally and politically beheaded. And now I am afraid of the appearance in the East of figures adequate to Yarosh in psycho-type and political outlook.