“Victory Name” takes on a different shade. Consolidation of the Russian world

February 26 2014
112
February 23 started the 5 round of the contest “Name of Victory”, which is held by online voting on the website http://www.nameofvictory.ru/. At the time of preparing the material, more than 3 million 60 thousands of users not only from Russia, but also from other countries took part in the competition.


Recall that the authors of the competition are going to "select" with the help of Internet voting 10 best domestic commanders, one of whom will be "awarded" the title "Name of Victory". Such an assignment will have to take place on 9 May 2014 of the year - during the celebration of Victory Day.

Despite a certain share of scandalousness of all previous similar contests, no particular friction has so far manifested itself in this competition. Perhaps because for the time being there is a large number of personalities among the “participants” - at the moment 40 people. Although hardly any backstage battles are to be expected at the final competitive stage, because the subject matter of the competition does not look as sharp as it was, for example, with the competition for the “most recognizable symbol of Russia” when the Grozny mosque came to the first place ...

So far, the top five “leaders” of the competition held under the auspices of the All-Russian State Television and Radio Broadcasting Company and the Russian Military Historical Society are as follows:

As can be seen, the Russian commander, Count Alexander Suvorov, leads with a significant margin in the competition.
The idea of ​​choosing the “best of the best” does not look straightforward. By what criteria do you need to compare people, each of whom has contributed to the development of the country and strengthening the borders of the Fatherland? Is it even possible to find the “formula” that will allow us to say who, from the point of view of military art and defense of its borders, has done more for Russia: Bagration, Rayevsky, Yermolov or Rokossovsky? Obviously, such a formula simply does not exist.

In this regard, it can be stated that the competition is more like a kind of game, but this does not detract from at least one of its weighty dignity - the potential increase in the interest of modern youth (and not only young people) to domestic storiesincluding the military. The authors of the competition took care of preparing sufficiently informative articles about the way these historical figures (and besides the historical personalities found a place in the competition to our contemporaries), doing their duty, following their vocation. In addition, following the results of the competition, several documentary projects dedicated to military leaders from different historical eras are planned to be shot.

In the light of recent events of a clearly negative nature, which are connected with the actual violation of the history by the gentlemen who stand for, God forgive, “democratic values”, the contest “Name of Victory” takes on an additional connotation. That war with monuments and memorials, which unfolded in a “otdemokrachchennoy” little world, today looks like nothing less than falling into the funnel of the Middle Ages. Apparently, the monuments and obelisks dedicated to the memory of the soldiers and commanders who liberated Europe from Nazism, defeated Napoleon’s armies, who removed the oppression of Ottoman rule, do not give rest to people who think they are the bearers of modern values. A man who in his entire life has not created anything except, excuse me, heaps in the toilet, with bestial howls, rushes to defile the monuments. If this is the modern “democratic” culture, then it would be better to pass for a thrice uncultured subject than to become like these barbarians. Barbara XXI century.

It is clear that wars with monuments are not at all wars with a specific historical persona. These are the most real wars with the Russian world, with Russia. Despite the fact that in Russia itself the attitude towards Ilyich is far from unequivocal, this is not important for the barbarians. Itching in one place does not give them the opportunity to sit on the fifth point and think carefully about finding a way out of the critical situation. And these “homo erectuses” do not intend to look for a way out - this is to be thought, to think, but there is nothing ... “Sapiens” within the group has not yet been born ... And those that have been born have degraded to the unrecognizable stage.

Another thing - to take a sip of bitter, to pull the pole out of the fence of the playground and with wild cries will rush to the fight with silent statues. That is - they are on the shoulder. 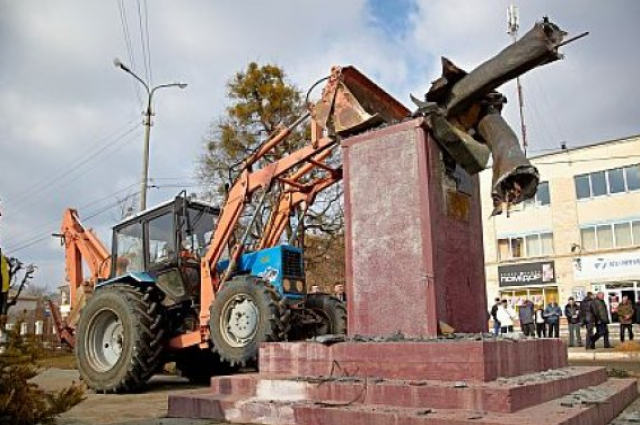 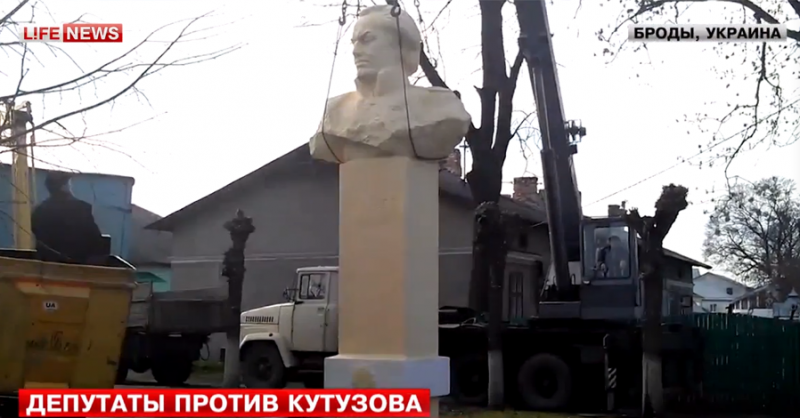 The itch pushes the neo-Nazi cattle, choking with foam of their own mouth, in search of victims. And the victim must be a priori incapable of resistance. And the monument here is just perfect. A monument to Lenin or a monument to Kutuzov is no longer important. It is important that the memorial, obelisk, sculptural group had at least some relation to the Russian world. Today Kutuzov, tomorrow Pushkin, Lomonosov ... There will be any pretexts. The example of Estonia, when she announced that the “Bronze Soldier” allegedly interfered with the approach of Tallinn people to the public transport stop, is still widely known.

The Russian Foreign Ministry was outraged by the dismantling (read - demolition) of the monument to Kutuzov in the town of Brody, Lviv region:

Russia is outraged by the ongoing demolition campaign in Ukraine. Yesterday, another barbarian Russophobic action took place in the Lviv region, where a monument to the Russian commander Mikhail Kutuzov was dismantled. We demand from the new Ukrainian authorities to stop this mess.

Gentlemen diplomats, yes no power in Ukraine! Neither new nor old. The power of powerless is what it is. There are neo-Nazism that does everything to provoke the Russian world, to strike at the very heart, to outrage our culture and historical values, to transfer garbage ideas across the Russian border and try to carry out our plans here. In this regard, the price of the issue is so high that it seems that diplomatic indignations alone can not be done. Consolidation of the Russian world is the main force that can knock the spirit out of neo-Nazi ideologues, their minions and backstage puppeteers. And if this consolidation does not happen, then today monuments will be dismantled for stones, and then by brick - and the Russian state in its broadest sense.

Ctrl Enter
Noticed oshЫbku Highlight text and press. Ctrl + Enter
We are
Situational analysis of the death of the MH17 flight (Malaysian Boeing 777), made on the basis of engineering analysis from 15.08.2014The nuances of the final "battle" domestic commanders
Military Reviewin Yandex News
Military Reviewin Google News
112 comments
Information
Dear reader, to leave comments on the publication, you must sign in.