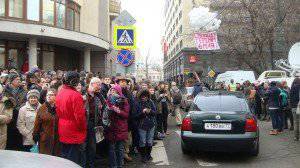 If a person does not think with his head, then, quite possibly, someone else does it for him! And not necessarily the other one will do it the best way for the first one!

The death of a living organism is recorded in the absence of signs of brain activity. Even if the heart is still beating. To living organisms can be attributed to social groups. The state is a living organism, living and acting under certain laws. In every living organism there are organs, in violation of the functions of which death occurs. It happens for various reasons that foreign cells arise and multiply in a living organism. Today, the schoolboy knows that these cells are called cancerous and that if their growth and reproduction cannot be stopped, the death of the organism occurs. If the tumor is removed before it spreads and touches the vital organs, then life can be saved.

In Russia, there have been repeated situations that could lead to death. Over the past century, this chain of betrayals led to the Gorbachev perestroika, the Yeltsin coup and the death of the USSR. After the painful amputation of "independent states", Russia survived. However, the alien cells left after all the upheavals and changes began to give multiple metastases. One of them is called "civil society", that is, some kind of neoplasm or a new community of people that is not connected with the state, parasitizes on the body of the state and forms a parallel world relative to the state. This formation of a malignant neoplasm is very vividly represented on the teleconference of traitors of Russia with the Gershanik-Ukraine traitors of Ukraine with the traitors of Ukraine last February 24:

The power vertical for such "cancer cells" is a relic of the past. They are convinced that another generation has come now that has grown up in social networks, and it should build horizontal relations with the authorities, that is, a new “civil society” that creates not power but resistance to power. One of the traitors, Igor Kondrashov, a US citizen, asserts: "The residents of Kiev did what they failed to do in Russia in the 1991 year. Ukraine was born that was never born in Russia and was not fulfilled. ... The war is won by the rear." Ukrainian traitors honestly said: "We are proud that we were able to show that we are worth something." They really showed what they are worth. Only words of normative vocabulary are not enough to adequately determine this price.

This TV show is good stuff for psychiatrists and state security agencies. It will be difficult to say that the case was fabricated through Photoshop, video editing. Do not hang any of the already familiar labels, which are usually pasted facts and evidence. Gathered themselves, they recorded themselves, they themselves posted on the network. The parade of the dead. True, one of these humanoid showed remnants of conscience. He was hard to lie. It was clearly visible without a lie detector. Honestly, it pleased. Because there should always be a spark of hope. If in this small “civil society”, represented by about ten individuals (it was difficult to count exactly, some appeared, others disappeared, and it is impossible to watch this masquerade for more than one hour, helpers are needed), at least one was found with remnants of conscience, then this is not bad percent. If we take for truth (???) what they themselves claim, namely that the Maidan was supported by more than 3 million people, then we can assume that about 300 thousands of participants are not yet dead, and they have a chance to regain their human face. Well, it is necessary to comfort the patient with something, which is the “civil society”, the formation of which many Ukrainians are so proud of since the first Maidan of 2004. Our naive belolentochniki, who faithfully believe their puppeteers and go to the crowd, try to form something similar in Moscow.

If today we take "Euromaidan" as a single organism, then we can state with certainty brain death: both of the whole organism, and among those individuals that support it. Complete and irreversible absence of signs of brain activity with remaining convulsive gestures. As a mantra, the words about the victory of the people, about the heroes of Ukraine and war criminals and other speech stamps are repeated. Moreover, these mantras are repeated not only in Ukraine, but, alas, in Russia as individuals, which Voodooists of Echo Moskvy had time to zombie. These spells are repeated by citizens of the "free democratic community" in Western countries (another dead person). It is hard for a living, and therefore thinking, to overlook the fact that Obama won the victory today. He ordered the withdrawal of power structures from Kiev, the next day they were not there. But it is not clear why the "heroes" of Ukraine ascribe Obama's victory to themselves? ..

Perfectly played scenario, faithfully reproducible for any particular country, at any selected point in the world. I just want to advise our "civil society builders": "Citizens, keep money in the savings bank!" Nobody advised Yanukovych, he was in trouble.

But Obama's victory is only today. And we know a good Russian song: "Oh, then not evening, then not evening ..." And towards evening, and with the "heroes of Ukraine" (civilians injured on the Maidan) can be sorted out. And until the evening It is necessary to provide asylum in Russia, medical and all kinds of other assistance to Berkut fighters declared by war criminals and their families! Until the end, they were faithful to their military oath, to their Fatherland, despite the abomination and betrayal of their “commander in chief,” the one whom they were supposed to defend and whose orders they should carry out. If our peoples are truly fraternal, then help must be fraternal, our brothers, and not billions to criminal regimes.

In the meantime, the cancer cells of the new "civil society" of Russia are starting their provocative performances in Moscow. It seems that the beatings and detentions that they constantly run into are for them the celebration of life, or rather, the illusion of life. The extracted photos about the "atrocities of the regime" are immediately laid out in networks and are already discussed in the State Department in search of a reason for "sanctions." Obama is intoxicated with the taste of the Kiev victory, and he cannot wait to perform a performance in Moscow. No flight of fancy: neither slots nor scenery change! A coward is afraid to take risks when there is a worked out scenario. He actively uses the usual resources of cowards and traitors: mass ignorance in the conditions of information terror, mob energy, lies and provocations, and even symbols of peace and patriotism. For example, on February 21, provocateurs, who were impatiently awaiting detention, were waiting at the courthouse in order to receive their photo portrait of the “victims of terror” from the “avtozak”, waving the Russian tricolor, singing the Russian anthem. Other provocateurs for the crowd's ovations released 8 white doves, symbolizing the defendants 8 and raised the banners "Freedom to the prisoners of 6 May!" on a bunch of white balloons. Balls tangled in the wires. It is symbolic!

Many well-known dead, fighters for the rights of the dead arrived at the performance outside the courthouse: A. Navalny, B. Nemtsov, I. Yashin, members of the Pussy Riot group N. Tolokonnikova and M. Alekhina, G. and D. Gudkovy and the head of Moscow Helsinki Group L. Alekseev. There was even a former prime minister, M. Kasyanov.

Artificial brain machines have not yet been invented, after all, the brain is more complicated than the kidney, and they have sold their brain with speech and motor centers. Own brain activity is not observed, although the active capture and infection of other healthy cells continues. The diagnosis was named above. And the performance went on. February 24 all evening at the Manege famous clowns: Tolokonnikova, Alekhina, Nemtsov and Navalny.

And nothing new in the old play. Tracing paper with Maidan and previous scenes. Even the pigeons were already ...

January 27 in Rome, on St. Peter’s Square, Pope Francis released two white doves after a prayer call for reconciliation of the warring parties in Ukraine. Look what happened and think what it would mean. Two white doves of the world were attacked by a black raven and a white seagull. It is symbolic. Or maybe a sign from above? .. 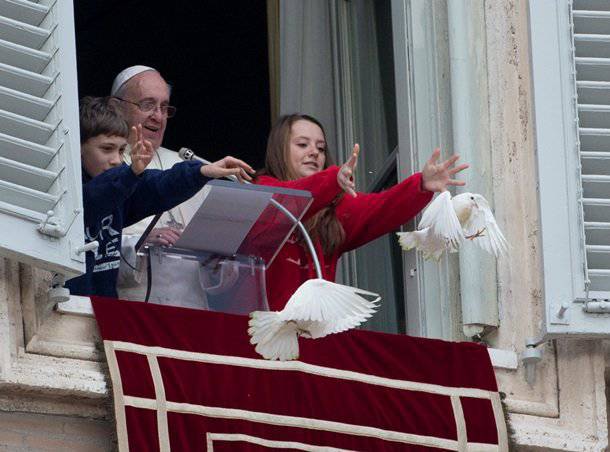 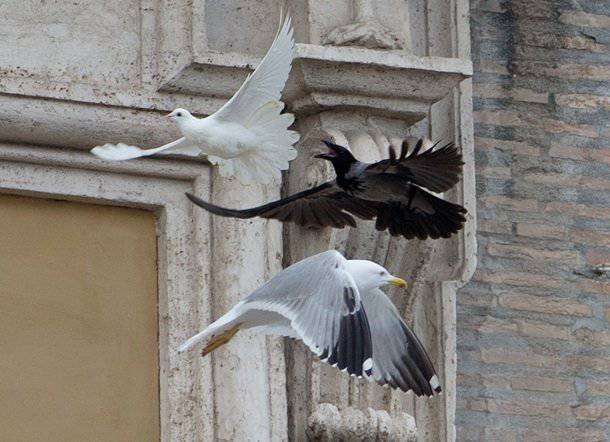 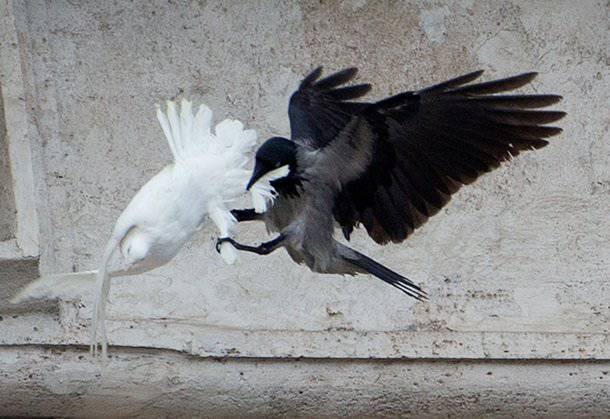 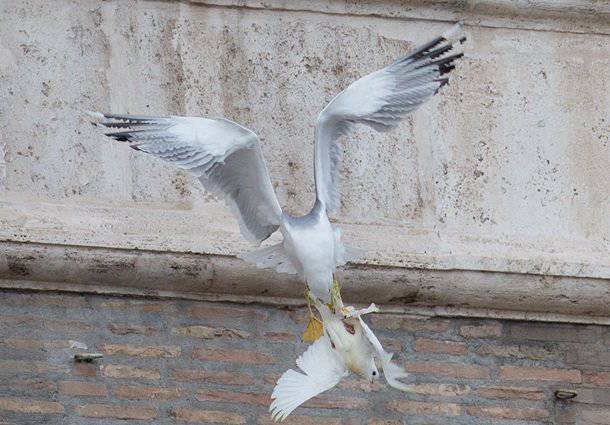 Only here prophetic interpretations appeared a great many, like the false prophets. “Maydanutye” claim that the black raven is Putin who attacked the white dove - Ukraine. No fancy guys! In all their troubles only Putin with Muscovites can be guilty. In Russia, they say that the black raven is Obama. In the opinion of the white seagull, the Russian-Ukrainian consensus is observed - Europe in the face of the famous Angela Merkel. Of the two pigeons of the world, one is rumored to have died. Think for yourself, decide for yourself ...

The war is already underway, and you understand it perfectly. Time factor, quick response, situation analysis, available resources. Everything must be considered and used with maximum efficiency. The more people who manage to maintain brain activity, the greater the chances of winning. So I want to believe that the Russians have already become boring of this performance, many times shown on foreign scenes. I would like to believe that the metastases called "civil society" have not yet hit the vital organs of the Russian state, that there are signs of brain activity among the majority of Russian citizens who can prevent a vile performance in the squares of Moscow and other Russian cities.

Ctrl Enter
Noticed oshЫbku Highlight text and press. Ctrl + Enter
We are
Situational analysis of the death of the MH17 flight (Malaysian Boeing 777), made on the basis of engineering analysis from 15.08.2014Memo to mercenaries in Africa
Military Reviewin Yandex News
Military Reviewin Google News
98 comments
Information
Dear reader, to leave comments on the publication, you must sign in.