February 25 2014
23
Designer Gennady Nikolaevich Nikonov is widely known for his AN-94 machine gun, created under the Abakan program. Nevertheless, over three and a half decades of work at the Izhevsk Machine-Building Plant, Nikonov managed to create several other equally interesting samples of small arms. weapons. So, in the late seventies, he designed an experimental light machine gun, designed to study the original automation system. As it turned out during the tests, the new machine gun on fire rate surpassed all existing and promising developments of this class. 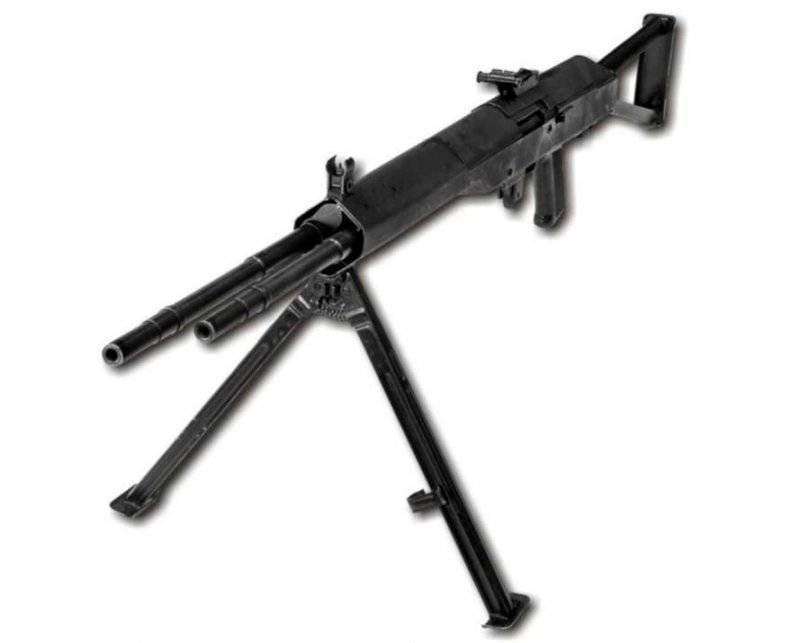 Nikonov’s experimental high-speed machine gun appeared in 1978. The designer began to work on the project as an initiative, having no orders or technical tasks. Nikonov intended to verify the original idea, which was to equip the weapon with two barrels. An experienced machine gun had a specific automation system, somewhat resembling the Gast system. However, the Gast and Nikonov systems were united only by the presence of two trunks and their mechanical connection, with the help of which each of the trunks reloaded the second after the shot and vice versa.

All units of the experimental machine gun were placed in a receiver of a complex shape. In the back, it had a pentagonal cross section and resembled a Kalashnikov assault rifle. In front of the receiver changed the shape of a square. Cover the back of the receiver could be removed for cleaning and maintenance of weapons. A bipod was attached to the front of the box, a butt borrowed from the M.T. Kalashnikov. To control the fire machine gun had a pistol grip with a trigger and a bracket. In front of them was a receiving window for a box store.

The use of two barrels, designed to increase the rate of fire of the machine gun, required the creation of an original automation system. Two rifled barrel caliber 5,45 mm were located side by side and had the ability to move back and forth within the 58-60 mm. To the rear of the trunks were attached gear racks, interacting with a special gear in the rear of the receiver. With the help of this rack and pinion, it was supposed to synchronize the movement of the trunks. On the existing photos it is clear that a certain telescopic bar was attached to the synchronizing gear. Apparently, it was intended to adjust the speed of rotation of the gear. 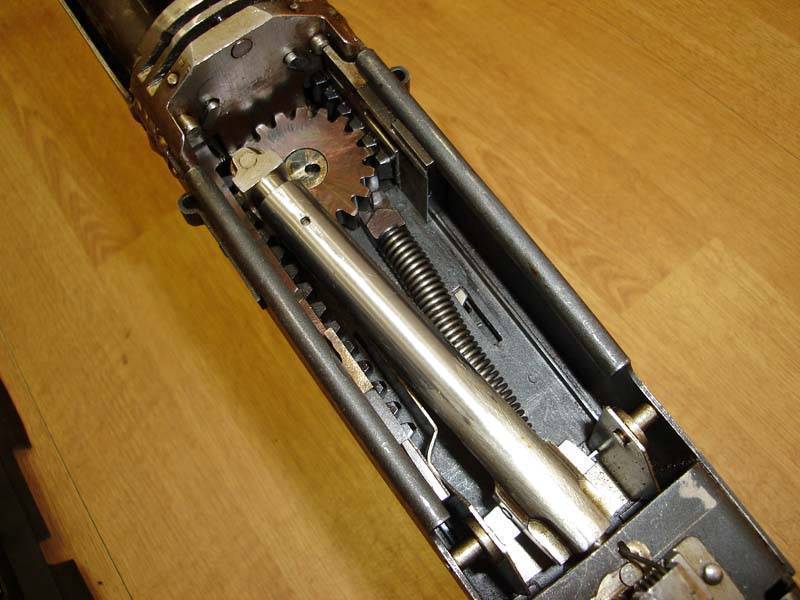 Before the synchronization mechanism inside the receiver there was a block that performed the functions of the shutter, and before it, in turn, there was a system for feeding cartridges into two chambers. Unlike other automatic weapons, Nikonov's high-temperature machine gun had a fixed bolt without any system for locking the barrel. Probably, such a system was chosen to simplify the design and increase the rate of fire. Two barrels had gas tubes connected to the pistons. Interestingly, the pressure of the powder gases had to move the barrel forward. However, according to other sources, the gas systems of the trunks were cross-linked, which caused the second one to move backward when fired from one barrel.

The high-grade machine gun was created under the cartridge 5,45x39 mm and could use the corresponding magazines from automatic rifles or Kalashnikov light machine guns. Since the sample was conceived as purely experimental and was intended solely to test the original design, such a power supply system was considered sufficient. No attempt was made to modify the machine gun for tape or any other power supply.

To guide the experimental machine gun was supposed to use an open sight and front sight, located in front of the receiver. For obvious reasons, the sighting devices had the simplest design, sufficient for testing in a shooting range.

Before firing a new weapon, the machine gunner had to pull one of the two cocking handles. In this case, the trunk, with which the handle was connected, shifted back and put the cartridge chamber on the filed cartridge. The second barrel moved forward. Moving backward, the barrel with a special protrusion in the breech pressure on a part of complex shape associated with the ammunition suppressor. The latter moved towards the second barrel and moved the new cartridge to its loading line. 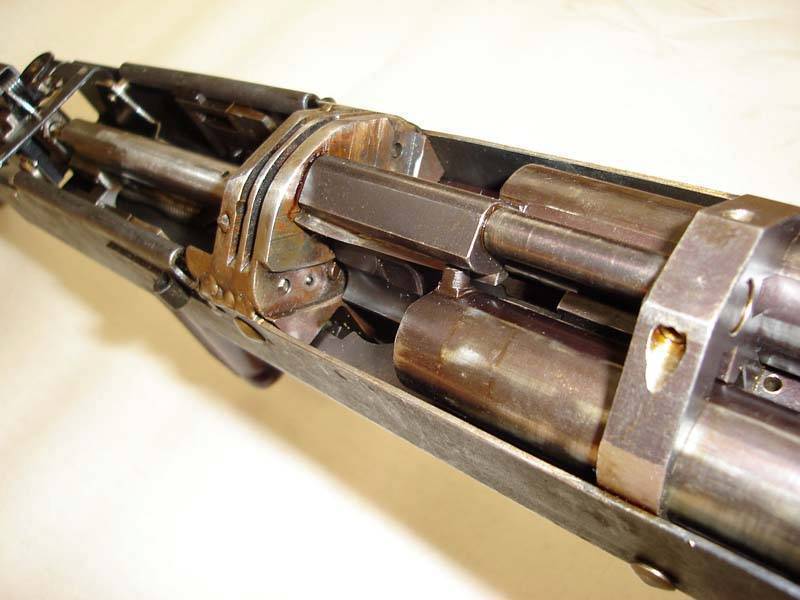 When you press the trigger, the firing mechanism was activated and the firing pin located in the bolt plate hit the cartridge cartridge in the first barrel. Powder gases from this shot fell into the vapor pipe and pressed on the piston that bore the barrel forward (as already mentioned, according to other sources, the piston shifted back the second barrel). Moving its gear rack, the first barrel moved the second to the rearmost position. At the same time, the extraction and discharge of the spent cartridge was carried out. Shells were thrown through two windows in the receiver cover. This was followed by a shot from the second barrel, made according to the same principles.

Alternately moving back and forth, the two barrels were constantly advancing on the cartridge and fired. The use of rack and pinion allowed to achieve accurate synchronization of the movement of trunks. During the tests, an experimental high-tech machine gun showed a unique rate of fire for small arms. According to the testers' estimates, the weapon could fire over 3000 per minute, i.e. about 1500 rounds per minute on each of the two trunks.

During the tests, the experimental high-temperature machine gun, Nikonov, clearly showed its positive aspects. However, this was not without flaws. The main one is the use of gears. Hit in the receiver of sand or dirt threatened to malfunction of the system of synchronization of trunks, or even its damage. In this regard, the Nikonov machine gun could not be used in real conditions without numerous additional modifications.

The second serious lack of design put an end to the use of a machine gun in the army and was associated with a high rate of fire. With a rate of fire of 3000 per minute, the standard magazine from the AK-74 on 30 cartridges was consumed in about one hundredth of a minute. The use of a little more capacious shops from the PKK light machine gun also did not allow for improving the combat qualities of the weapon. This problem could be solved either by artificially reducing the rate of fire, which contradicted the very ideology of the project, or by the introduction of tape feed, which would require a radical redesign of the structure.

It should be recalled, the experimental high-tech machine gun G.N. Nikonov was never considered as a prototype of small arms for the army. The task of the project, developed on an initiative basis, was to check an interesting and bold automation system with two trunks. The machine gun successfully coped with the demonstration of the potential of the new scheme, but more was not required of it. At present, the only prototype of Nikonov’s high-grade machine gun is kept in the museum of the Kalashnikov concern.