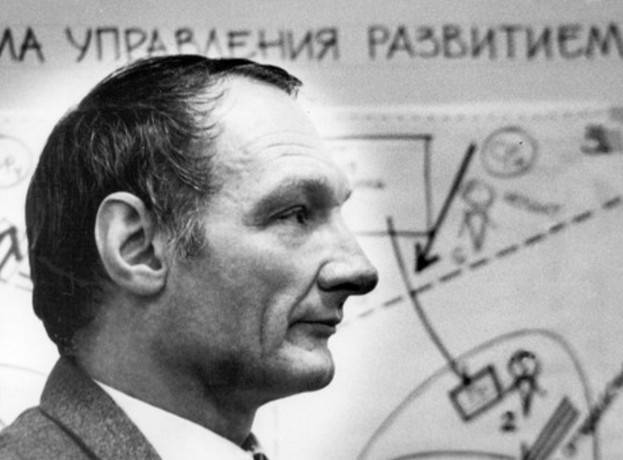 23 February 2014 marks the 85 anniversary of the birth of the Soviet Russian thinker, philosopher and methodologist George Schedrovitsky (1929 – 1994). Also in 2014, 60 marks the years since the defense of another dissertation by Russian philosopher, logician and sociologist Alexander Zinoviev, “The method of ascent from the abstract to the concrete in K. Marx's“ Capital ”.

Zinoviev belonged to the older generation, and for Shchedrovitsky, who had transferred from the physical faculty to the philosophical faculty of Moscow State University, at first he acted as a teacher. Together they are in partnership with Merab Mamardashili and Boris Grushin (“Essays on Logic historical reconstruction ”) merged into the Moscow logical circle. So in the USSR, after the war and the death of Stalin, a living philosophical thought appeared that did not hide underground and was an open public effort to comprehend and continue Marxism not as an ideology, dogma of the secular faith or even socio-political doctrine, but as a real step in the development of world philosophy.

Subsequently, Georgy Shchedrovitsky together with his students and partners within the framework of the Moscow Methodological Circle he created, developed an ontology of activity and thinking, as well as an appropriate methodology and approaches. It is the ontology of activity and mental activity that is the next step in the metaphysics of Marx's work in the movement of scientific and post-scientific thinking. It is believed that it was the appeal to the logical problematics that determined the specifics of the Russian Soviet unofficial, but public post-war thought. Shchedrovitsky was engaged in content-genetic logic, Zinoviev - the logic of scientific research, Ilyenkov - dialectical logic, Bibler - dialogue. The logic really became the main theme of work in Russian Soviet post-Marxism.

The explanation of this fact, based on the thesis that there could simply be no other topic due to ideological circumstances, which happened because of the maximum possible ideological neutrality of logical topics, is an explanation that is incorrect, although it gives the desired “coinciding with experience” result . Russian Soviet post-Marxists did not mimic the ideological demands of the communist church at all. This was not necessary. They themselves were part of it. All their self-determination and life indicate that they considered history to be the only space for their existence. And least of all, they were dissidents.

The logical direction of development was inevitable, since the very nature of the mental enthusiasm that fed this generation of Russian thinkers was inevitably and decisively scientific. Georgy Shchedrovitsky is, perhaps, the brightest ideologue of the scientific attitude to thinking - an attitude that should lead to the construction of thinking technologies, and, accordingly, to a revolution exceeding in its consequences the industrial revolution.

Marx's thinking was no longer actually philosophical. It declared itself consciously as scientific and as such and conquered the world. Marxism became the first technology of thinking, thinking as a mass activity. Russian Soviet post-Marxism inevitably had to become bringing the actual scientific type of thinking to the limit, going beyond the limits of the scientific type of thinking, reflection and problematization of scientific thinking. That this was done not only on the material of the natural sciences, but above all on the material of the most developed scientific thinking - Marxism, thinking, for the first time in history, seized social processes in such a way as to make them the subject of experience of a scientific type (i.e., problematic, transformed , experiment), and determined the exit of Russian Soviet post-war philosophy at the frontier of world thought, in a leadership position.

At the same time, an attempt to place this Russian philosophy in the global context, comparing it with Wittgenstein’s lines of the formalist philosophy of language, structuralism, logical research, is not productive, primarily because these lines are just inside the body of scientific thinking and do not claim to be beyond its limits, criticism and reflection. Russian Soviet post-Marxism must be comprehended in comparison with the line of German post-Marxism itself as the most developed consistent line of historicism and reflection of European thinking as such. This line goes from Hegel and Marx to Nietzsche and Heidegger respectively.

Heidegger claimed that none of the critics and simply reprimands of Marx had overcome, however, Marx's metaphysics of labor, which is the development of European scientific metaphysics, established by Descartes. In the reconstruction of Heidegger, Descartes' thesis about the self-identical subject, which becomes the criterion of thinking, establishes the scientific metaphysics proper, the metaphysics of the New Time. It is precisely because metaphysics of the subject is established and dogmatized by scientific thinking that the question of logic, or rather, the method of thinking comes to the first place and is considered the main issue of thinking, and the object is considered as a subordinate construction, dependent on the method and subject (material).

Actually, the same is formally approved by the methodology of the Moscow Methodological Circle, the leader of which was Georgy Schedrovitsky. Science produces knowledge, in the structure of which the object is a construction that has no metaphysical meaning. Schedrovitsky's methodology captures and explores this fact of thinking by means that are much more advanced than the methodology of the science of Thomas Kuhn, Karl Popper and their followers. However, in itself, this is not yet the overcoming of scientific thinking as such; it is only the possibility of the total spread of scientific thinking, primarily to social phenomena, which was first done by Marx.

It should be noted that Alexander Zinoviev, leaving the theoretical logic returned in the last period of his work to the thesis about the priority of scientific thinking, having implemented it in the most prominent sociological works of our time.

Science in the twentieth century was not only finally dominant and the only type of thinking, but turned into an ideology, or rather, into a secular religion, better known as atheism. Its applications, namely the ideology of social sciences, created by Marxism, known as the two most popular secular religions - communism and liberal democracy. The scientific ideology is a religious prominence of the scientific metaphysics of a Cartesian self-identical subject, supplanting the metaphysics of God.

Georgy Shchedrovitsky distinguished between his own scientific thinking, whose schemes and methods he reconstructed in his methodological works, and his scientific ideology, which was criticized by Schedrovitsky as naturalism, a naturalistic setting. Scientific ideology, naturalism ultimately kills science itself. And our task, according to Shchedrovitsky, is not just to continue scientific thinking, but also to go beyond it. Post-Marxism of Russian Soviet post-war philosophy lies in this. Marx did not suffer naturalism, he thought scientifically in the exact sense of the term. And we must go beyond the limits of Marxism as a science. Within the framework of naturalistic prejudices, we cannot not only overcome Marx, but also simply understand him.

Of course, Shchedrovitsky’s criticism of naturalism was not carried out in a relatively theological reality, as well as in an applied sense - on the vulgar-materialistic basis of secular religions of democracy and communism. These findings need to be traced today. But it is based on anti-naturalism, proclaimed Shchedrovitsky.

Heidegger shows in the reconstruction of Nietzsche and European nihilism as such, as the European metaphysical subject is ultimately ready to destroy and deny European thinking itself as such. Therefore, Heidegger plausibly believes Nietzsche is the latest metaphysician of European thinking. Nietzsche is the successor of the line of Hegel and Marx. Marx demanded and sought the liberation of labor, overcoming his alienation. But where, to what space of existence, can labor be released, whose metaphysics is the consistent development of the metaphysics of the self-identical subject? There is simply no other way for the existence of liberated labor, except for the Nietzschean subject of self-expanding and self-identical power. The emancipated labor must become the subjective basis of the superman. So we can comprehend the experience of the USSR. But should they?

Marx himself as a sociologist of capitalism analyzed alienated, abstract labor. Its substance is the basis of value. but what is labor outside (for example, before) alienation? And what will it become after the removal of alienation, after de-abolition? Marx does not have a developed answer to this question and generally no detailed answer. Marx speaks of a useful, objectively definite work, the form and content of which are determined by the historical process. He also calls such work - as opposed to abstract, alienated labor - activity. But the substance of the activity of Marx is not developed. But what if labor can be liberated just by not subjectivating it, but, on the contrary, by conducting its fundamental desubjectivation? What if work just needs to be released about the power of a European self-identical subject, since it is he who, by doing work as his foundation, purifies him to the substance of abstract labor, which is converted into the substance of money. It is this subject that acts as the ruling class, as the capitalist Marx, as a nation (a society that has mastered the state).

Heidegger believes that the restart of European thinking (and therefore European civilization) can only be returned to its beginning, that is, to the question of existence, of being. He believes that it is necessary to return literally to the Greek mindset. Schedrovitsky’s philosophical and methodological setting poses essentially the same task. But, unlike Heidegger, Shchedrovitsky goes to the question of being not through the deconstruction of language and not by returning to the beliefs of existence before the separation of poetry and philosophy, that is, knowingly before Socrates, but through an attempt to grasp in the thinking of being the whole totality of existence (essences, of things) created by the European civilization in the course of its history, including the “things of thought” created by science.

If the historicism of Heidegger as the first post-Marxist (and the first postnitscheans respectively) consists in returning to the beginning, which will manifest itself at the end of history in the future, then Schedrovitsky's historicism in considering the historical whole in its maximum diversity the middle. " It is precisely as being the maximum development of entities, things, things that Shchedrovitsky’s philosophical and methodological attitude considers activity. It is the way of putting activity (bypassing the self-identical subject of Descartes) that distinguishes the system-thought-based methodology of Shchedrovitsky and the Moscow Methodological Circle from scientific thinking as such. And from the philosophy-as-such, it is distinguished by the installation on the meaningful disclosure of the world of existence through existence, being, activity. The emancipated labor must become the activity, and not the basis of the subject.

The USSR was and remains an experiment of Marxist scientific thinking, the first technology of thinking with history, society as a whole. Philosophical and methodological developments of Shchedrovitsky and MMK were and remain a program for the development of a historical project for the development of European civilization, which was the basis of the Soviet empire of Russia. The political death of the USSR does not in any way cancel the cultural and civilizational significance of this project - as well as the values ​​of the post-Marxist philosophy and methodology of Shchedrovitsky and MMK.