Ukraine on the way to bankruptcy and fascist dictatorship 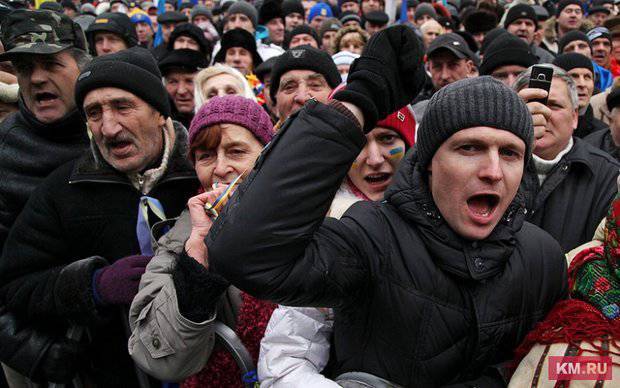 Ukraine leaves the fairway of Russia. You can refuse to admit the obvious things for a long time, but it floats away. The western part of the country gained the upper hand over the eastern part, while Yanukovych was weak and lost ground. And who would stand in his place? Only the personality of Slobodan Milosevic’s scale, but Viktor Yanukovych is not like that. And the outcome is sad there: everyone remembers the fate of Milosevic, but Yanukovych does not want a similar share for himself.

Now it is fit for him to repeat after Yeltsin: "I am tired, I am leaving." Only "tired" to replace with "scared." But he, first giving his statement the hope that he would fight, later tried to fly to Russia, but was not released by the border guards.

And in Kiev, there continues the “feast of winners”, who in large numbers appoint “revolutionary commissars” to law enforcement agencies, dismiss (illegally, but who cares ...) ministers and repeal previously adopted laws.

Including canceled the Law “On the basis of the state language policy,” which allowed the regions to introduce Russian as the second state language. The leader of Svoboda, Mr. Tyagnibok, has already announced that a new act will be developed that will “satisfy all members of national minorities, preserve the rights of the Ukrainian language as the only state language”.

I think, the repeal of the law imposing responsibility for the denial of the crimes of fascism (already introduced to the Rada) is not far off. Well, on the ground it has already been canceled: in the Lviv region a monument to a Soviet soldier was demolished. And the notorious "Right Sector" made a statement that, they say, no, they are not Russophobes. “Our attitude to Russians, as well as to other representatives of national minorities, fits in perfectly with the methodology proposed by Stepan Bandera,” the document says. Thank you guys, "reassured."

Very soon a “sworn friend” will arise on our borders, and it will be necessary to build relations with him on new principles. What is still unknown, but more nervous than before.

It is still good if he ever gives us back the three billion that the authorities so quickly lent him. But it may not return, citing, for example, the fact that there is no money. And they really do not exist - the speaker Rada Turchinov, proclaimed by the interim president, admitted: “There is no money on the treasury account”. Maybe then it is easier to recognize bankrupt and introduce external management?

Two million (or so) residents of Western Ukraine imposed their will on the rest of Ukraine, and she couldn’t oppose anything to them, except for the Berkut. By the way, "Golden Eagle" is a pity. Such special forces are not ashamed to have any state. One can only guess what awaits them under the new government. In any case, no one declared the amnesty to them as “maydanovtsy”. But these are the three hundred Spartans who can stop the army of Xerxes in a mountain gorge, but only if they are not betrayed. But betrayed: something tells us that this will happen. “Berkut” now it would be best to destroy personal affairs and dissolve among the population. They say they are ready to shelter in some Russian regions.

Not only Yanukovych, but also Russia was not ready to go to the end. And zapadentsy - they walked and died, and again they walked, as if under the influence of psychostimulants, according to the "Berkutovtsy". And always the one who does not stop at nothing wins.

The rest of the "protestants" went into the square with the zombie extras. Twenty years of tireless anti-Russian propaganda have done their job of all irons. All these "famines", all these Shevchenka with their false verses. Does anyone know them? I read something: “Kokhitesya, young, that is not with Moscovites, the Moscovites are angry, they are doing well with you.” Muscovites are us, we insult the Ukrainian “divat”, we throw them with our kids, and then they die. Written in the middle of the nineteenth century and all this time was taught in schools. Since then, nothing has changed, anti-Russian sentiment only intensified.

The state of Ukraine did not take place. Ukraine has never been independent and could not be. One part of it has always existed as the outskirts of the Russian Empire (later - the Ukrainian SSR), the second - as the outskirts of Austria-Hungary. The first twenty years of “independence” that had broken off after the collapse of the USSR ended in civil war, when a brother went to war with his brother, as it does in failed states. However, she is not the only one: there were many peoples who could not bear the burden of their own statehood, who fell under it.

This is a shame, but even more annoyingly another - that the Russian authorities have been so mistaken about Ukraine and perceived it as an almost equal partner, giving it their ancestral lands. And what good happened? To whom did you fawn? Who got our Crimea? Who are the eastern regions? Bandera with Maidan? Not ashamed now for your cowardice? After all, it was worth decisively saying: “This is ours!” And a bit, just a little bit to pull towards oneself, as they would have dutifully stepped aside. Psevdogosudarstvo, which is not able to cope with several thousand hooligans who have ganged out, could not even keep the Crimea.

Perhaps now is the last chance to regain the peninsula. All the same, they will sell it for hunger and cold, or for debts it is not known to anyone (Turkey, for example) to pay for gas supplies next year. Just as the unfinished aircraft carrier was sold to China for the price of scrap metal.

In future relations with Ukraine, all this must be taken into account. “You and I are not equal,” Boris Yeltsin once said on another occasion, but that’s about her too. And now the degree of inequality only intensified. There is nothing behind the facade of Ukraine. There is neither a meaningful policy, nor strong finance, nor a normal ideology, nor a cohesive nation.

And now frank Bandera will come to power. Many years have passed since the time when they ran through the forests with machine guns and sat in caches, and the habits remained the same. There are calls to kill the family "Berkut" and burn the houses of deputies from the "Party of Regions". Similarly, those who collaborated with the Soviet authorities after World War II were intimidated and killed. "Regionalschiki" know this and who are weaker, leave the faction. How can you resist when you threaten the family? And for them - all means are good.

Farewell, Ukraine! Live as you like, boil it in your own juice, spread your black soil on bread (this is how the blissful Ukrainian writers presented the quality of their agricultural soil). We are tired of the eternal troubles with gas, as well as the constant desire to get freebies from Russia for "fraternity". It's time and honor to know. When the South Stream comes into operation, it will be frantic to fraternize.

Thought “leave? Will not leave? "Too tired. Yes, let him go wherever he wants. What is called, "love without joy was, separation will be without sadness." Although no, sadness will arise, but this will pass with time. It is better this way than to cut off the tail piece by piece and bandaging it every time, hoping that with time it will grow. It does not grow, alas ...

Ctrl Enter
Noticed oshЫbku Highlight text and press. Ctrl + Enter
We are
Strelkov in Yekaterinburg predicted the fate of Milosevic to PutinWhat you didn't want to know about England
Military Reviewin Yandex News
Military Reviewin Google News
265 comments
Information
Dear reader, to leave comments on the publication, you must sign in.