February 25 2014
28
Russian-American cooperation in the space field may reach a new level. According to the publication Space News, the United States is considering the possibility of buying a license to manufacture rocket engines RD-180. In the near future, work should begin on assessing the possibility of signing such an agreement and organizing licensed production of engines. 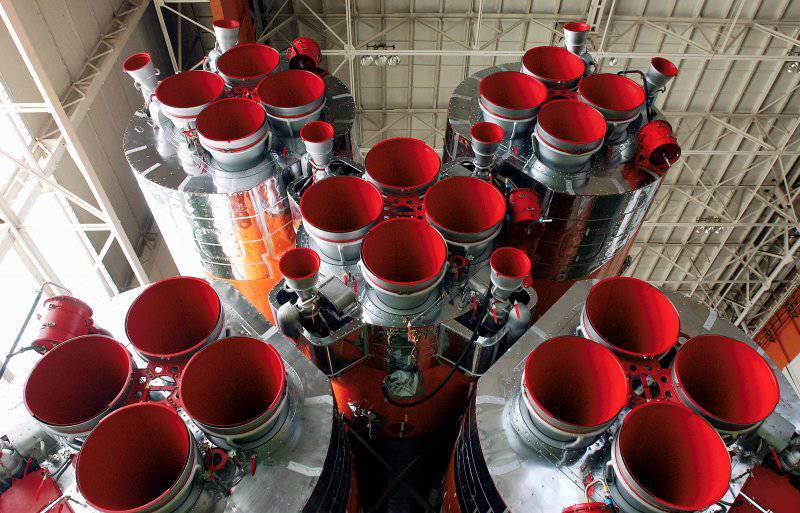 Russia and the United States began to cooperate in the field of rocket engines in the mid-nineties. Thus, in 1996, the Russian research and production association Energomash with the RD-180 project won the tender for the creation and supply of engines for the American Atlas carrier rockets. Shortly after the end of the tender, Energomash and General Dynamics signed an agreement, according to which, before 2018, the Russian side must supply an 101 RD-180 engine worth about 10 million each. So far, most of the contract has been executed: the American space industry has received 70 engines.

In accordance with several existing agreements, the Russian NPO Energomash is engaged in the production of engines for American launch vehicles. All other work and responsibilities are assigned to the RD-Amros joint venture created by Energomash and Pratt & Whitney. The first launch of the American Atlas IIA-R rocket (later renamed Atlas III) equipped with Russian engines took place in 2000. Until 2005, there were six launches. The purpose of these activities was to launch commercial and military spacecraft into orbit. Since 2002, Atlas V missiles have been used for the same purposes. To date, 43 launches of such missiles have been completed, including one emergency.

Due to the launching of military equipment into orbit, the Russian side has recently begun to make corresponding claims. For example, last summer, Russia for this reason planned to terminate the contract for the supply of RD-180 engines. The termination of deliveries of Russian engines does not suit the United States. Without similar engines, Americans will not be able to exploit their launch vehicles. In addition, there is every reason to believe that the United States plans to continue operating Atlas V missiles even after 2018, for which a new treaty must be signed.

Claims from the Russian side forced the Americans to start searching for a way to protect their space programs from a possible breakdown of the engine supply contract. One of the most profitable ways to solve this problem is to purchase a license for the independent production of RD-180 engines. In this case, American enterprises will be able to produce and supply the required number of engines, and projects in the space industry will not depend on the relations between the two countries.

It should be noted that the benefits of the independent production of rocket engines will be accompanied by some difficulties. First of all, this is a significant increase in the cost of engines. According to various estimates, the licensed version of the RD-180 will cost almost one and a half times more than the original Russian version. The main reason for the rise in prices will be the high complexity of the deployment of the production of engines created taking into account the capabilities and technologies available to the Russian industry. Because of this, the real increase in the cost of engines may be even higher than expected.

The second problem of the possible licensed production of engines is the difficulty of purchasing a license. Relations between Russia and the United States can not be called bad, but the existing level of trust still does not allow sharing technologies of this level. In addition, the supply of ready-made engines under current conditions for our country is more profitable than the sale of a license. The production of RD-180 engines is one of the main income items of NPO Energomash and the termination of such works will seriously affect the enterprise.

A few days ago, information appeared in the domestic media about the possible resumption of deliveries of another rocket engine. According to Izvestia, citing a source in the Russian space industry, in mid-February, the Russian Security Council allowed the United States to continue supplying NK-33 engines. According to the source "Izvestia", the Ministry of Foreign Affairs and the military department opposed the resumption of the supply of NK-33. At the same time, Deputy Prime Minister D. Rogozin spoke in favor of continuing such cooperation, which should lead to the resumption of production of engines of this model.

The NK-33 engine was designed for use on the "lunar" launch vehicle H-1. The closure of the project of the rocket led to the fact that several dozen such engines remained in the warehouses. 37 NK-33 engines were sold a few years ago to Aerojet, which refined them for use on new American launch vehicles. As part of the modernization project called AJ-26, Russian engines dismantle some of the equipment and install new components, including the cardan thrust vector control system.

Two AJ-26 / NK-33 engines are used in the first stage of the new Antares launch vehicles. 21 April 2013, the first launch of this rocket took place, during which four small spacecraft and one weight simulator of the promising cargo spacecraft Cygnus were put into orbit. To date, there have been three launches of the Antares family of missiles. All three starts ended with the successful removal of the load on the orbit. The next launch is scheduled for early May this year.

According to Izvestia, the resumption of production of NK-33 engines will help not only the American, but also the domestic space industry. Engines of this type can be used on Soyuz-2.1в launch vehicles. At the same time, however, Roskosmos is ready to purchase only a few NK-33 engines, which are supposed to be installed on new missiles. At the same time, the American company Orbital Sciences Corporation, which created the Antares rocket, guarantees the purchase of a batch of 20 engines.

The current cooperation between Russia and the United States in the field of engines for launch vehicles is mutually beneficial, although not without some specific problems. The American space industry receives relatively cheap engines with high performance, and Russian enterprises earn money for the supply of similar products. This allows domestic factories to have a stable portfolio of orders, and for American organizations to launch regular rocket launches with spacecraft and earn money on it.

On the other hand, relations between the US and Russia have their own specifics, because of which existing contracts can be terminated at any time. The reason for this, for example, can be the launches of US military satellites that can be used against Russia. Thus, ambiguous views of some politicians stand in the way of scientists and designers, which does not contribute to the strengthening of mutual relations and cooperation between the two countries.

The pros and cons of the current situation have led to the fact that the United States is now forced to consider the issue of purchasing a license to manufacture RD-180 rocket engines. The verification of the state of the industry and the economic aspects of such a deal will begin in the next few weeks. In the meantime, the countries intend to work in accordance with the existing agreements.