Russia can not deny Stalin 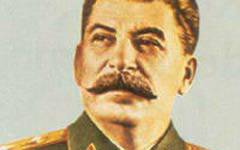 Public attention has once again attracted the theme of so-called. de-Stalinization. This time, the commentary was triggered by the publication on Memorial’s website of the full text of a proposal to establish a nationwide state-public program “On perpetuation of the memory of victims of the totalitarian regime and on national reconciliation”, which was handed over to Dmitry Medvedev on February 12 by the Presidential Human Rights Council.

I must say that the document was more balanced compared with what was expected. The authors talk about the need to bury Lenin, rename the Russian streets and cities named after the Bolshevik terrorists. In other words, they are fighting not only against Stalin, but also against the entire legacy of the Soviet period. However, these are the positive aspects of the document and are exhausted.

The authors propose to create, in fact, a gigantic industry to commemorate the victims of Soviet terror. They consider it necessary to create memorial complexes and museums commemorating the victims of Soviet power. They offer to provide social support to victims of political repression who are still alive. They talk about the need to change the system of some holidays: for example, to celebrate the Police Day is not 10 November, as is done in accordance with the decision of the NKVD, and 7 June, the day the city police was founded by Peter I.

Of course, there are many unacceptable sentences in the text. On the danger of so-called. "Repentance" we said in a previous article. Well, now I would like to talk about another painful problem: how to relate to the Soviet period? The authors of the proposals of the Human Rights Council believe that the implementation of their developments will immediately lead to national reconciliation. Some of them, however (such as Sergey Karaganov), believe that the goal is not national reconciliation, but a change of consciousness. This task, frankly, smacks of occultism. If you want to change the consciousness, meditate and become a Buddha, but do not make political proposals.

The Soviet period for me is divided into three stages: pre-Stalin, Stalin and post-Stalin. 1917 to 1929 Historical Russia was subjected to unprecedented pogroms. Millions of Russian people were killed, including representatives of the aristocracy, science, culture, intellectuals. The government headed by Lenin successfully pushed Russia into the Stone Age. Having come to the sole authority in 1929, Stalin tried to return Russia to the historical path from which it was thrown as a result of the revolution. He relied in many respects on that stratum of culture that was gained in pre-revolutionary Russia.

That is why the Stalinist modernization was successful. Note that other countries with Soviet regimes that tried to follow the Stalinist path crashed. For example, Mao lost with his cultural revolution and great leap. And all because in the history of China there was no period of intensive pre-revolutionary cultural and industrial development. The “Great Helmsman” had nothing to rely on.

Stalin took measures for national reconciliation. This includes not only the destruction of the Bolshevik executioners in 1937-1938, but also the adoption of a new, Stalinist constitution of 1936. The term “disenfranchised” disappeared: this was the name given to people who were deprived of civil rights due to their origin (for example, children of nobles, priests, representatives of those classes that the Bolsheviks considered exploitative). The famous chess player Mikhail Botvinnik writes in his memoirs that he had difficulties with entering the institute in the 1920s, since he was the son of “a person who did not do physical labor”. His father was not a landowner or a banker, but only a dental technician, but that was enough for Botvinnik to have problems. It was Stalin who introduced the famous doctrine of "the son is not responsible for his father." Of course, the children continued to renounce their fathers throughout the Stalin period, and the ritual itself is terrible. But no one was subjected to repression just because his father was from a different social stratum.

Thus, thanks to Stalin, the Soviet period of Russian history was not only negative. There were achievements - the creation of industry, a powerful army, superpower status; later, after Stalin, a flight into space, the creation of a powerful Soviet middle class during the time of Brezhnev. Therefore, the renunciation of Stalin and the Soviet period bears Russia irreplaceable costs, because, despite the gigantic human and resource losses, the twentieth century was the high point of the Russian state and the Russian people.

How to treat Stalin? After all, he really was an extremely cruel ruler. Yes, just as the French refer to Napoleon.

Napoleon is not just a great commander. No, he filled the whole of Europe with blood, 10 million people died in his wars, all French youth were put under the gun and exterminated on the battlefields. Moreover, unlike Stalin, Napoleon lost his Great War with the whole of Europe and ended his life in exile.

Nevertheless, the French honor his memory as the memory of a great man. He is buried in the House of Invalids (an architectural monument in Paris, in which famous French soldiers of different epochs are buried). Of course, the first years after the overthrow of Napoleon were called "General Bonaparte" and sought to erase from history. But then the situation stabilized, and Napoleon became what he really is - part of the French historical heritage.

Attitudes toward Napoleon changed in the same way that the headlines of French newspapers changed during his flight from the Elbe and the attack on Paris during the "One Hundred Days". According to Academician Tarle, the first news was: "The Corsican monster landed in Juan Bay." The second news: "The ogre goes to Grasse." The third news: "The usurper entered Grenoble." The fourth news: "Bonaparte occupied Lyon." Fifth news: "Napoleon is approaching Fonteneblo." The sixth news: "His imperial majesty is expected today in his faithful Paris."

Then there was a defeat, but by the middle of the XIX century, everyone recognized Napoleon as a great man. And this is not accidental, because there can be no three stories of France - the history of royal France, France republican, France Bonapartist.

Similarly, we need to bridge the gap in the history of Russia. Lenin proclaimed that the USSR had nothing to do with the Russian Empire. The democrats who came to power in 1991 year declared that they were breaking up with the Soviet past (although it was prudent and accepted the status of a great power inherited from the Soviet Union). As a result, the president of Russia can seriously utter phrases, from which it follows that Russia is just 20 years old. In other words, Russia originated during the reign of Boris Yeltsin. This is a monstrous thesis, but it has its foundations in our split history.

We need to restore continuity with the Russian Empire. Recognize that the USSR also had a good, and not just a "totalitarian hell", the Gulag and the NKVD. Understand that the history of Russia is one and continuous, despite all the cataclysms. That our country has more than 1000 years.

And then it will become clear that Stalin is only an episode in the history of our state, though, without a doubt, an important and significant one. What to renounce him means to renounce not only terror, but also industrial society created by him, the status of a great power, which he achieved for Russia. Therefore, we, of course, should rebuild Lenin from the Mausoleum, like his associates. But they should be buried in a national cemetery, like the people who contributed to the history of our country. Who is good, who is bad, and who is "average."

This will be a national reconciliation when we leave behind the Soviet terror, but keep for ourselves the Soviet achievements. The same applies to the Russian Empire. Only on this foundation can a country develop normally, and not on a foundation of endless repentance and self-spraying, which was enough since restructuring. 25 has passed years of indignant demonization of our history. It's time to finally say: “Enough.”