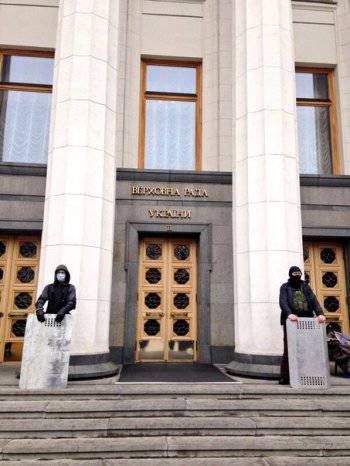 Ukraine is in chaos, and the threat of Russian intervention is growing. Under these conditions, the responsibility of the West for achieving a constructive result becomes self-evident.


Russia may plunge Ukraine into a brutal, destructive and dangerous civil war for the international community. She is able to provoke the secession of the Crimea and some industrial areas in the east of the country. But this will create a guarantee that the majority of Ukrainians will turn into Russia's eternal enemies, regardless of the first results of the civil war incited by Moscow.

In turn, this will expose the nostalgic dream of Russian President Vladimir Putin to create a "Eurasian Union", showing that this initiative, promoted by him personally, is built on intimidation and coercion. And this is not the most pleasant prospect for the former Soviet republics that have become sovereign.

But the West can play a constructive role in deterring violence. This will require concerted action by the US and the EU. The United States can and should clearly convey to Putin the idea that they are ready to use their influence and make sure that a truly independent and territorially integral Ukraine pursues a policy towards Russia that is similar to the one that Finland has so effectively implemented. This would mean neighborly relations of mutual respect, extensive economic relations with Russia and the EU and non-alignment with any military alliances that Moscow considers directed against it. At the same time, Russia's ties with Europe should be expanded. In short, the Finnish model can be an ideal example for Ukraine, the EU and Russia.

But in order to convince the Kremlin, the US needs to privately explain to Moscow that attempts to destabilize the emerging democracy in Kiev and / or secession of parts of Ukraine, not to mention Russia's secret or open participation in its neighbor’s internal conflicts, will force Washington to use its international influence, and this will cause such steps, which will be extremely costly for Moscow economically.

The measures here can be very diverse, from individual to interstate financial sanctions; a revision of Russia's status in the World Trade Organization, in the World Bank, as well as its role in the G8. It is obvious that the EU in such efforts should become a solid partner, since it has significant volumes of trade with Russia.

But even more pressing and important for the EU is the need to form a package of urgent and significant financial assistance to Ukraine. Otherwise, this country will plunge into destructive financial chaos. Germany, as well as Britain, should take the lead in Europe. The role of the latter as a refuge for the Russian and Ukrainian financial oligarchs gives London special leverage. But every EU country must make certain sacrifices in an attempt to prevent a potentially catastrophic economic collapse in Ukraine.

Obviously, the US and the EU, with the help of Russia, must continue to exert pressure on the democratic forces prevailing in Kiev so that they are not engaged in revenge and punishment, but in national unification and political restraint. It is possible to make it, and the leaders who appeared on the Maidan are moderate.

Therefore, regardless of how things go in the near future, I still believe that sooner or later Ukraine will truly become part of a democratic Europe. Sooner or later, Russia will follow it if it does not self-isolate and turn into a stagnant imperialist relic.

Ctrl Enter
Noticed oshЫbku Highlight text and press. Ctrl + Enter
We are
Situational analysis of the death of the MH17 flight (Malaysian Boeing 777), made on the basis of engineering analysis from 15.08.2014Zbignev Brzezinski on Russian Policy (“The American Interest”, USA)
Military Reviewin Yandex News
Military Reviewin Google News
84 comments
Information
Dear reader, to leave comments on the publication, you must sign in.