The revolution in Ukraine won, but is it over?

February 25 2014
70
23 February 2014 of the year. In Russia, the holiday - Defender of the Fatherland Day, the Russian Olympic team came out on top in the team event. Our athletes have 12 gold medals.


And in Ukraine, meanwhile, Kiev finally captured Euromaidan, Yulia Tymoshenko got out of prison and managed to speak on the Maidan. Zapadentsy and Bendera celebrate victory. But what will happen next?

The "golden eagle" detachment returned to the Crimea from Kiev. They were greeted with flowers, bread and salt, like heroes. Three of them were met as fallen heroes. While Kiev is celebrating victory, there are calls for revenge.

In Kerch shouting "fascists" are driving out activists of the Maidan. In Kharkov, they shout "shame", but do not beat. Forces are approximately equal and Kharkiv residents do not want to climb into a fight, several of them are smashed noses.

But if the people clearly and unequivocally state their position, then the politicians are pulling rubber. Instead of clear actions, calling for arms and declaring Maidan out of the law-only the decision to create self-defense units and prevent the seizure of administrative buildings.

While in Kiev they unequivocally declare that they will not allow the disintegration of Ukraine and all calls for separatism will be punished. And at the same time, Bendera is already raising the issue of banning the Russian language.

What will happen next? There are two options.

The new government in Kiev will listen to the voice of reason and begin to negotiate with the Crimea and the East. Then most likely they recognize the power of Kiev.

There is a third option. The peace treaty between the West and the East of Ukraine and the transition to federalism.

Putin, regardless of his desire, will have to negotiate with the new government of Ukraine. To give them loans to recover from "peaceful protests" and discounts on gas. He has no hopes for Yanukovych. They say that Putin even refused to talk to him.

If confrontation starts between the West and the East, Russia will have to mediate and persuade both parties to sit down at the negotiating table. Or even conduct a peacekeeping operation.

Russia's actions will largely depend on the development of the situation in Ukraine itself. From the way the new government behaves, whether it will strive for the EU or start negotiating with Russia.

In the case of the worst developments and the beginning of mass purges in Ukraine, the killing of Russian citizens, Putin, as in 2008, will have to send troops. But I think this is unlikely. Tymoshenko and Co. should understand this.

The position of Western countries

Europe speaks under the dictation of the United States and takes all decisions with an eye to Washington. For Washington, this is primarily an opportunity to create a base right on the border with Russia, deprive Sevastopol and control the Black Sea. Ukraine for them is nothing more than a convenient base.

Therefore, it is obvious that the United States and Europe will continue to support the "peaceful protest", put pressure on Yanukovych and close their eyes to any excesses of maydanovtsy in the Crimea and in the east of Ukraine.

And so, regardless of how peaceful the next Maidan will be, it will support the US overclocking.

It does not matter who will seize power in Ukraine. A heap of debts awaits any president, the economy is on the verge of default, a mob of radicals in the square, law enforcement agencies demoralized by betrayal, a conflict between East and West, and an unsolved issue with the EU.

Accession to the EU is disastrous for Ukraine. Yanukovych understood this at the last moment, so he refused. This was understood in Moldova, so they also refused, quite calmly and without pressure from Russia.

There is a video on the Internet with the frank name "Moldovans turned out to be smarter than Ukrainians", on the video they understand the reasons for the refusal of European integration. The reasons are interesting and they all boil down to the fact that Moldovans read the points written in small print, according to which Moldova plays the role of a colony of Europe. The contract is drafted in such a way as to destroy industry and the agricultural republic and open borders for European goods. At the same time there is not a word about joining the EU and visa-free regime.

With the European integration of Ukraine, it is waiting for the destruction of its industry, the blockade of European goods, but there will be no dividends like a visa-free regime or investment. Do not believe? Read the contract carefully. In Russia, even grandmothers already know that it is necessary to carefully read ALL the clauses of the agreement, and not just those that are on the first page in bold.

One more thing. Going to Europe, do not forget to legalize same-sex marriages and hold a gay parade in the center of Kiev. This is a mandatory condition, about which you will be reminded.

And here the swing can swing in the opposite direction. Mass discontent of the residents of South-Eastern Ukraine and part of the well-known zapadentsev will result in a new Maidan, a new coup. And so endlessly until the seizure of power by a real tyrant or until the collapse of Ukraine as a country.

Russian position. Not to be confused with the position of Russia

Russian uniquely against Maidan. We are all definitely on the side of the Crimea and residents of Eastern Ukraine. Yanukovych, however, we consider as spineless, who betrayed the "Berkut" and Bendera who passed the country. And do not think that we support it. This is not true.

Contrary to the attempts of Bendera and zapadentsev to present everything in such a way that we heard enough Kremlin propaganda, our opinion is based mainly on information from the Internet and from numerous acquaintances and relatives in Ukraine.

But maydanovtsy word for word repeat the propaganda of the United States. Until the delirium that Russia attacked Georgia. And they are supported by all kinds of internal enemies of Russia.

But at the same time, the Russians are perplexed with the behavior of the inhabitants of the Crimea and the East of Ukraine. In a situation where it is necessary to act quickly and decisively, they slow down and wait for something incomprehensible. The decisions of Putin, Yanukovych and hell understand someone else.

Putin basically can not tell you anything. Yanukovych has already shown that he is no one to call him. Waiting for something from him is useless.

And here the question arises, what should we do? Go to war in Ukraine? But for whom, if the Ukrainians themselves dutifully surrender to a handful of Nazi shortages? To fight for you? Well, sorry, we have enough of our problems to solve your problems too.

Appeal to the people of Ukraine

Russia is on your side, but do not expect us to intervene out of the blue. However, there wasn’t there, but Ukraine is an independent country. And Putin can not interfere in the affairs of a sovereign state. He's not Obama. This is the Americans used to climb with their pig snout to any country in the world.

So this is your country. You live in it and you put it in order. If you do not stop Bendera, then no one will.

Russia will help you. Putin had not once been afraid of the United States or Europe, and acted tough and decisive. In August 2008 of the year. Then he defended the people of South Ossetia from Georgia. But such an intervention requires a serious reason.

And in any case, Putin will not allow to intervene in the affairs of Ukraine Ukraine. How not to do it in Syria. Then he put the black monkey in front of the fact that Russia will support Syria. Now he will do it all the more.

But even if Putin suddenly betrayed the Ukrainians, which is possible, we, ordinary people in Russia, will help the simple Russians. We will not leave you.

But you must take the first step.

They might think that I call on Ukrainians for a civil war. Nothing like this! The civil war and the collapse of Ukraine is the worst possible scenario. But if you don’t put zapadentsev in place now, do not defend your rights, do not show strength, and they understand ONLY FORCE, they will crush you.

“Russians! I’m now turning to all Russians, the inhabitants of Ukraine and Belarus in the Balkans are also considered Russians. Look at us and remember - they will do the same with you when you separate and give up slack. Brothers, remember the fate of Yugoslavia! Do not let us do the same to you! " 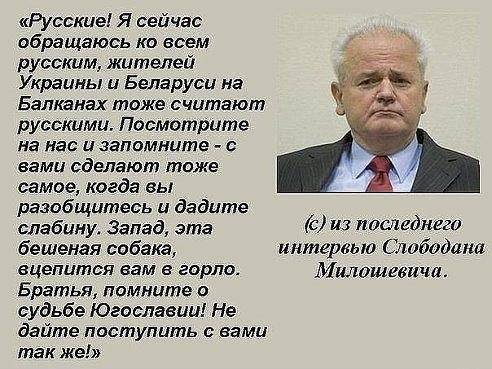 Appeal of the Serbs to the Ukrainians:

Free translation: "Ukrainian brothers! While you shed Orthodox blood, the devils from the west grin and rub their hands! Think!" (I did not understand the last word)

Pps. I learned that in Lviv or somewhere near it a monument to Soviet soldiers was demolished. And after that, the Westerners are surprised that they are called fascists? Yes, you are the fascists! Those who did it in Russia are better off not showing up. 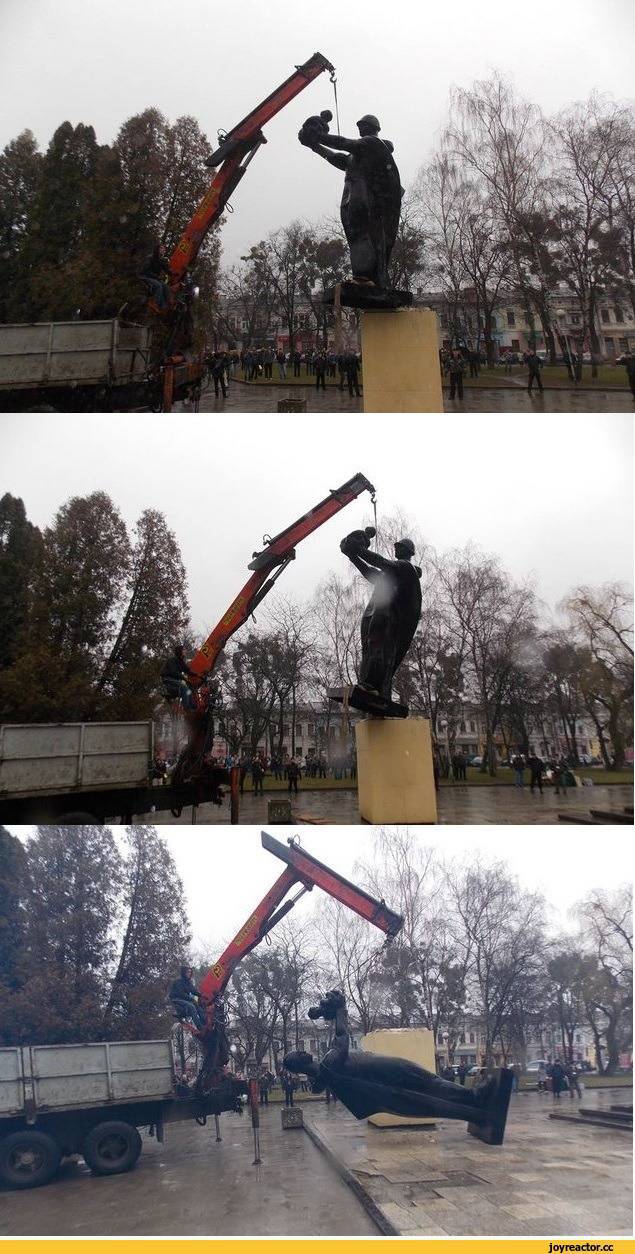 And what infuriates, guys, because of such freaks, all Ukrainians are recorded in the support group for the name of Ostap Bender. Already there was talk that while the Belarusians fought in partisan detachments and at the front, the Ukrainians served the Germans! This is not so! My great-grandfather purebred Ukrainian went through the entire Great Patriotic War! My grandmother was in the occupation and wore food to REAL partisans, not Bendera! But because of such freaks, people think badly about all Ukrainians.

And even in Lviv itself it turns out, not everyone supported this vandalism. Therefore, everything was done quickly and without noise. They were afraid that people would not understand. So there is hope.

Yes, those who demolish the monuments to Lenin, also morons, but we do not care for that. It's yours историяand you shit on it. It was Lenin who was one of the first to support the idea of ​​the independence of Ukraine ...

Ctrl Enter
Noticed oshЫbku Highlight text and press. Ctrl + Enter
We are
"In Kiev, we fought with werewolves." "Golden eagle" told about secrets of the Maidan: snipers, capture of a mortuary, underground smithyView of the Crimean journalist from the Maidan: "Everyone got it - we are tired"
Military Reviewin Yandex News
Military Reviewin Google News
70 comments
Information
Dear reader, to leave comments on the publication, you must sign in.