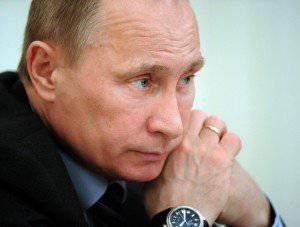 It is quite noteworthy that as soon as Russia takes a foreign policy step, the Western media immediately begin squealing angrily (on command, as if on command), in every possible way stifling Russia and our president personally. It seems that many politicians in the West are stuck in old cold war trenches flooded with water and still consider our country as the source of hell, where the KGB and the Gulag rule. Check out any Hollywood film about today's Russia, in which only our black life shows our modern life using 30 patterns of the last century. And such examples do not count. For example, take at least the Sochi Olympiad and its "colorful" descriptions in the Western press. It is well known from Greek times that wars, battles, attacks on each other stop during the Olympiad, and former opponents "fight" on the sports lists, showing their prowess and sports training. But things are very different in the West with the Olympics in Sochi, which caused a number of political figures and journalists to once again occasionally viciously bark at our country, showing their most base, vile qualities.


Here is a sample of this disgusting propaganda. President Putin’s foreign policy in Syria does not meet the Olympic ideals, Mark Malloch-Brown, a former UN Under-Secretary General and former British government minister, said in his article on Foreign Policy. “Now the Putin government is the main obstacle in the UN Security Council - it is blocking a resolution that would put these lofty ideals into practice,” the author brazenly lies. According to Malloch-Brown, Russia must insist that the Syrian government miss humanitarian aid for "Syrians dying of hunger and lack of medical care because of the blockades imposed by the Assad forces."

What a word, then lies and outright slander, calculated on the fact that the western man in the street is not very versed in international affairs. It is possible to remind the former minister, and at the same time enlighten the western man in the street, that it was the Russian Foreign Ministry that proposed to introduce a truce in Sochi during the Olympics, to stop any hostilities. Yes, indeed, Russia rejected the draft resolution submitted by its Western partners to the UN Security Council, believing that this document would only complicate the situation and thwart efforts for a political settlement against the background of an international conference in Geneva. Foreign Minister Sergei Lavrov explained in some detail to his Western partners why Moscow had rejected this draft resolution. But at the same time Russia introduced its project, more detailed and more constructive, aimed at improving the humanitarian situation in Syria. But the former British government minister did not say a word about this.

In addition, the western man in the street can be reminded that Russia regularly sends humanitarian aid to Syria, which saved tens of thousands of Syrians from starvation and cold. And what about the United States and its Western partners? Yes, they also “help”, but they help the Syrian opposition to further fan the flames of civil war. The press repeatedly passed messages about how CIA agents actively train Syrian gangsters and thugs at bases in Turkey and Jordan, how different kinds of weapons are supplied to these “fighters” for freedom. What is worth, for example, the message that has just appeared that the closest American partner of Saudi Arabia is going to supply man-portable air defense systems to the Syrian thugs, as written by the Wall Street Journal, citing diplomatic and opposition sources.

Saudi Arabia offered the opposition supplies of Chinese MANPADS, an unnamed diplomat from an Arab country told the publication. According to the newspaper, the proposal was first announced at the end of January, when the first round of negotiations in Geneva ended, at a meeting with the rebels of representatives of the intelligence of the USA and Saudi Arabia, as well as other countries of the Persian Gulf. At this meeting, the parties expressed regret that the Syrian government delegation in Geneva does not want to discuss the resignation of President Bashar Assad.

The United States has repeatedly stated that they oppose the supply of anti-aircraft missile systems of the Syrian opposition for fear that they could later be used against Western countries. And there is no doubt that many international gangsters and thugs, having gained experience in Syria, may appear in Europe and the USA, and then the western man in the street will have no time for a warm feather bed. This is not gloating, but a simple statement of fact.

Let us take another example: the visit of Egyptian Defense Minister Abdel Fattah al-Sisi to our country, Foreign Minister Nabil Fahmi and their highly successful negotiations in the “two plus two” format with Russian Defense Minister Sergei Shoigu and Foreign Minister Sergey Lavrov. At the same time, Vladimir Putin received the Egyptian delegation in Novo-Ogarevo, where, addressing Abdel Fattah al-Sisi, he said: “I know that you, dear Mr. Minister of Defense, have decided to run for office of the President of Egypt. This is a very responsible decision - to assume the mission for the fate of the Egyptian people. I wish you success both on my own behalf and on behalf of the Russian people. ” In other words, our president expressed good wishes to the Egyptian guest.

But even such kind words addressed to the Egyptian guest caused a real wave of hysteria in the West. Instantly, the Al-Arabia website (UAE) presented a statement by State Department spokesman Marie Harf, who expressed regret that Russian President Vladimir Putin openly supported one of the candidates in the upcoming presidential elections in Egypt. “The decision about who should be in power in Egypt should be taken not by Russia or the United States, but by the Egyptian people,” M. Harf stressed.

Bravo, Mrs. M. Harf! At last, you and other Washington politicians have come to a simple truth known from time immemorial that the fate of a country is decided by its people. Then the question is: where were you before, when the American military and its western singers in the spirit of fascism attacked Afghanistan, Iraq, Libya, and now they are tormenting Syria? Should not the Afghans, Iraqis, Libyans and Syrians themselves decide the fate of their countries? Why did Washington, occupying Afghanistan and Iraq, destroy statehood in them and implant puppet regimes only on him? Why is there still a civil war in these countries and the blood of civilians is being shed? Moreover, all states are located thousands of kilometers from the United States, and not one of them declared war on the Americans or attacked American territory. Think, before it's too late, dear Mrs. M. Harf. By the way, it was good to think before the ancient Greeks advised before taking any action, including on the world stage.

Where a horse with a hoof, there and cancer with claws, says the Russian proverb. According to her, Western singers are already starting to spin a new round of anti-Russian propaganda. And now the "dollar" sang Italian Stefano Magni published an article in the Opinione newspaper under the catchy headline "Cossacks on the Nile: Putin supports al-Sisi." This Italian is not at all interested in affairs in Italy itself, where the next political crisis and the Italian Prime Minister Enrico Letta announced his resignation. S.Manyi is only interested in “If the Cossacks drink their horses in the Nile?”. And, trying to be more American than the Americans themselves, the Italian sadly exclaims: “There is no doubt that negotiations between Putin and al-Sisi, especially after the promise to sell weaponshould be considered a clear and strong signal from the Obama administration. But does anyone in Washington listen to what is happening? ”

At the same time, the visit to Washington of the Minister of the Interior of Saudi Arabia, Prince Muhammad bin Naif. The Saudi guest reportedly conferred with US Secretary of State John Kerry, US National Security Advisor Susan Rice, CIA Director John Brennan, and Head of the National Security Agency Keith Alexander. I wonder how the Russian media reacted to this visit. If in the spirit of evil Westerners, then such articles should appear: “The Saudis have completely laid down under the Americans,” “The Pentagon views Saudi Arabia as its pocket training ground,” etc. It may be recalled that the huge American fleet, including nuclear aircraft carriers, has been hanging out in the Persian Gulf for a year now, completely poisoning its turquoise waters with its waste. By the way, where are the fighters for the purity of nature, where are the activists of Greenpeace, where are their fearless attacks of American aircraft carriers? But this is nothing. As well as the professional Russian press only informs its readers about current events and gives analytical articles, avoiding the angry attacks on the West and its leaders.

I wonder how our President V. Putin behaves at this time? While the Western press is angry, he paid a visit to the American house in the Olympic Park in Sochi and spoke there with the president of the US Olympic Committee Scott Blackman and members of the American delegation. According to RIA News, the Russian president thanked the United States for supporting Sochi as the capital of the Winter Games. “I remember how friendly the representatives of the United States reacted to our application in Guatemala. We remember and thank our American friends for their support, ”Putin said. According to the Russian president, the American team at the Games in Sochi looks very strong. “In my opinion, Americans are performing very well,” he noted.

Pay attention: he didn’t say any bad things or taunts to the Americans, although it is known that V. Putin is very sharp on the language and can speak quite sharply. And so it turns out, as it were, two approaches to the events in the world: the continuous evil tattling of the West addressed to us and the very benevolent attitude of V. Putin towards the Americans. Feel the difference? I would say earlier - a good education. And nowadays it is the presence of both a good upbringing and a manifestation of the usual culture of communication, and the legacy of the great Russian civilization, which dictates peaceful coexistence with other nations, nations and states.

Ctrl Enter
Noticed oshЫbku Highlight text and press. Ctrl + Enter
We are
The history of politics around the OlympicsWhat you didn't want to know about England
Military Reviewin Yandex News
Military Reviewin Google News
25 comments
Information
Dear reader, to leave comments on the publication, you must sign in.