The first flight of the shock "drone" 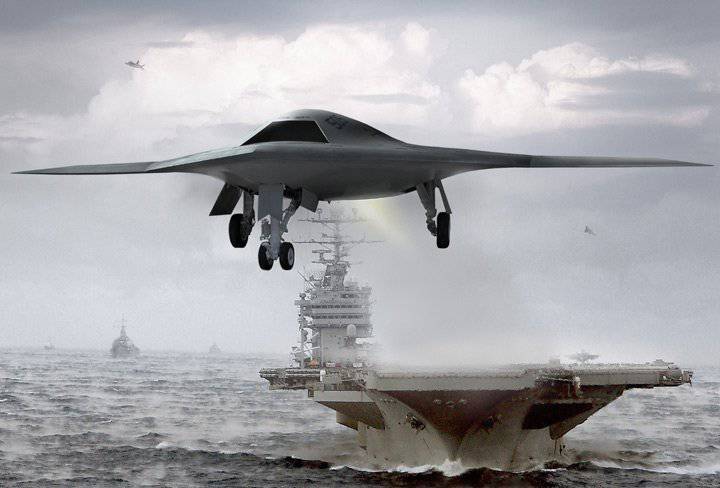 Unmanned strike aircraft appeared much earlier than is commonly believed. Behind the bloody feats of the MQ-9 Reaper in Iraq and Afghanistan are hiding 70 years stories shock drone, proved in practice the possibility of successful combat use of this type of technology.

Apart from the crafts of enthusiasts who conducted unsuccessful experiments with radio-controlled biplanes in 20 ... 30-s of the last century, the real history of drone UAVs began during the Second World War. The German “miracleweapon"V-1" - Fieseler Fi-103 projectiles with a pulsating jet engine used for the bombing of large area targets - London, Antwerp, Liege, several missiles were fired at Paris.

Despite its gloomy glory, the V-1 only vaguely resembles modern UAVs. Their design and guidance system was too primitive. The autopilot based on the barometric sensor and gyro guided the rocket in a given direction until the clock mechanism worked. V-1 rushed into a steep dive and disappeared in a blinding flash of an explosion. The accuracy of such a system was hard enough even for terror against the major cities of the enemy. The fascist "vundervaflya" turned out to be useless for solving any specific tactical tasks.

The “V-1” super launch was a mediocre “rattle” against the background of a real miracle weapon, which was ahead of its time by 70 years. The prototypes of the modern “Rippers” and “Predators” should be sought in the same place - across the ocean.

An important event directly related to the creation of combat unmanned aircraft, happened in 1940 year. Russian émigré engineer Vladimir Zworykin received an unusual order from the US Navy - the creation of a small-sized television camera weighing no more than 100 pounds (45 kg). A very strict requirement by the standards of those years when vacuum tubes were used instead of transistors. 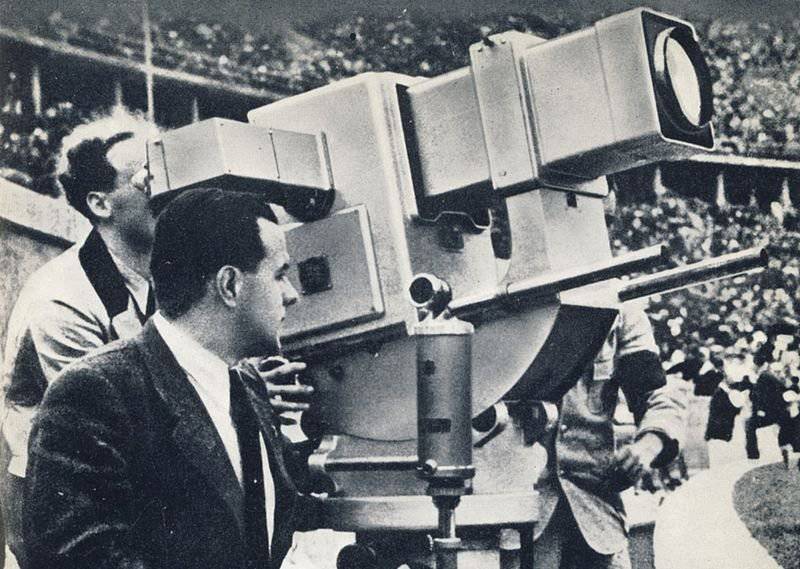 Olympia-Kanone, 1936 TV Camera. Scan - 180 rows
Vladimir Kozmich Zvorykin, who had already made a name for himself on the creation of a cathode ray tube and the invention of modern television, successfully coped with the task. The “Block 1” camera, together with the battery and the transmitter, was placed in a 66x20x20 cm case and weighed only 44 kg. Viewing angle - 35 °. At the same time, the camera had a resolution of 350 lines and the ability to transmit video over the radio channel at a speed of 40 frames per second!

A unique camera was created by order of the marine aviation. It’s easy to guess why the American pilots needed this system ...

Even before the attack on Pearl Harbor, the American fleet launched a program to create an unmanned strike aircraft. Naval aviation required a remote-controlled torpedo bomber capable of breaking through the air defense system of the enemy ships without putting the life and health of the pilots at risk.

Torpedoing is one of the most dangerous combat techniques: at this moment the aircraft must strictly maintain the combat course, being in close proximity to the target. And then no less dangerous evasion maneuver followed - at this moment the defenseless machine was right in front of the enemy anti-aircraft gunners. Pilots of torpedo bombers of the Second World War were not too different from kamikazes, and, of course, the Yankees became interested in the possibility of performing such risky work with the help of soulless remote-controlled robots. 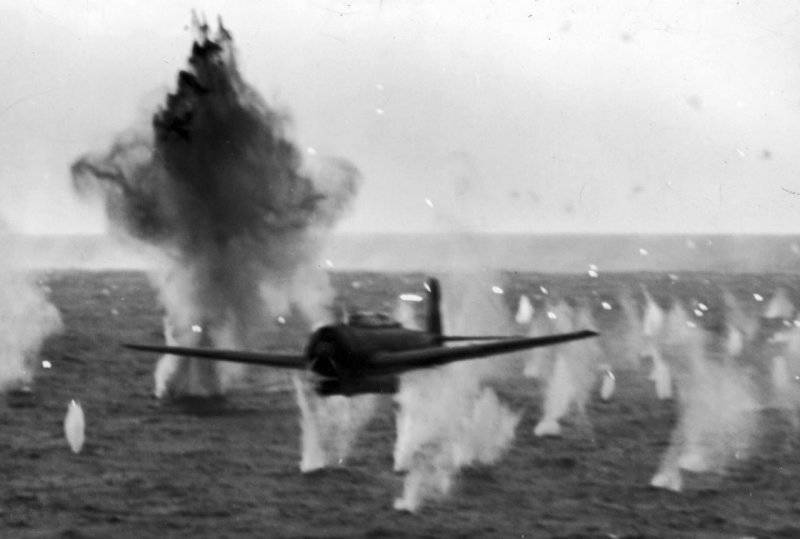 Japanese torpedo bomber in attack. The picture was taken from the side of the aircraft carrier "Yorktown"
The first ideas for creating such a system were expressed in 1936 by Lieutenant of the United States Navy Delmar Fairly. Despite its sci-fi status, the program to create a shock UAV acquired a priority (albeit low compared to other programs of the Navy) and got a start in life.

During the design it turned out that to create such a machine, a couple of innovations are critically needed - a radio altimeter and a compact television camera with a sufficiently high resolution and the ability to transmit a signal at a distance. The Yankee radio altimeter was already there, and Mr. Zworykin kindly presented the camera with the required parameters.

With the escalation of hostilities in the Pacific, the program to create a shock UAV received the highest priority and the code designation "Project Option". In April, the first practical test of the system, a “drone”, remotely controlled from an airplane flying in 1942 km, took place in April of the 50, successfully attacked the target, which the destroyer Aaron Ward portrayed. Reset torpedo just passed under the bottom of the destroyer.

Encouraged by first successes, leadership fleet hoped by 1943 to form 18 attack squadrons, which will be armed with 1000 UAVs and 162 control aircraft built on the basis of the Avenger torpedo bombers.

The "drone" itself received the designation Interstate TDR-1 (Torpedo, Drone, "R" - Interstate Aircraft production index). The main qualities of the UAV should have become simplicity and mass. Among the contractors of the Interstate company were a bicycle factory and a piano company. 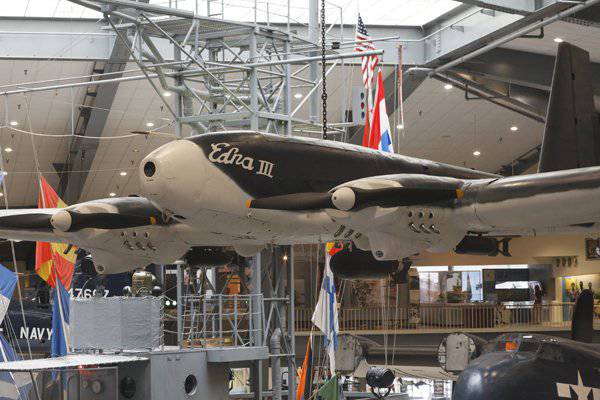 Interstate TDR-1 at the National Museum of Naval Aviation
The supercar was a frame assembled from tubes from bicycle frames, with plywood sheathing and a pair of unpretentious Lycoming O-435-2 motors of 220 hp power. each. A detachable wheeled chassis was used to take off from a coastal airfield or an aircraft carrier. The flight from the ship to the shore or to the next airfield was done manually - for this there was a tiny open cabin aboard the drone with the simplest flight instruments. When departing for a combat mission, it was closed by a fairing.

In the nose of the aircraft, under the transparent fairing, was installed camera "Block-1". Each television transmitter and receiver operated one of four fixed radio channels - 78, 90, 112 and 114 MHz. The remote control system also operated at four fixed frequencies. This circumstance limited the number of UAVs simultaneously participating in the attack to four cars.

The combat load was 910 kg, which allowed the drone to lift one 2000-fnl. bomb or aircraft torpedo.

No less surprising was the control plane, designated TBM-1C. The position of the operator acquired the appearance of the 80's fighter cockpit - with a TV screen and a “joystick” of the drone control. Externally, the command "Avengers" differed fairing antenna devices located at the bottom of the fuselage. 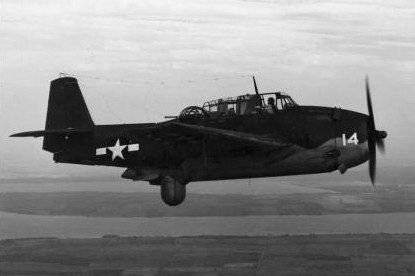 As further tests showed, classic bombing with Interstate turned out to be difficult - the operator did not have enough data to accurately aim and drop bombs. The drone could only be used as a torpedo bomber or a cruise missile.

Despite the positive test results, the development of a new system was delayed. Nevertheless, by May 1944, the TDR-1 were able to successfully complete the test cycle, flying from coastal air bases and a training aircraft carrier to the lake. Michigan. 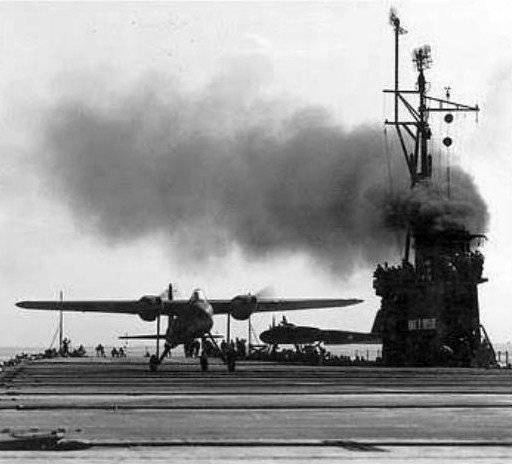 One of the first prototypes of a remote-controlled UAV (TDN) on the deck of the training aircraft carrier "Sable"
By the time of the adoption of drones in service, in the war in the Pacific there was a radical change. Major naval battles are in the past, and the US Navy no longer has an urgent need for radio-controlled torpedo bombers. In addition, the military was embarrassed by the too low LTH of unmanned aircraft, which limited their use in serious military operations. The priority of the program was reduced, and the order was limited to the entire 200 UAV.

By the summer of 1944, Special Task Air Group One (STAG-1) had finally reached combat readiness, and was sent to the war zone in the South Pacific. 5 July 1944. Markus Island, an escort aircraft carrier, delivered UAVs, command and control aircraft and STAG-1 personnel to an air base on Russell Island (Solomon Islands). Pilots and UAV operators immediately began to test equipment in conditions close to combat. 30 July three "drone" attacked the stranded and left by the crew of transport "Yamazuki Maru", which gave reason to believe that the UAV is ready to perform these tasks. In September, two combat squadrons, VK-1 and VK-11, were formed from STAG-12.

The first combat departure of a drone drone in the history of world aviation took place on September 27 1944. The purpose of the "drone" of the squadron VK-12 was one of the Japanese transports off the coast of the Solomon Islands, turned into an anti-aircraft battery.

Here is how the attack is described by one of the pilots of the command "Evenger":

“I remember well the excitement that swept over me, when the contours of an enemy ship appeared on a gray-green screen. Suddenly, the screen was charged and covered with numerous points - it seemed to me that the telecontrol system failed. After a moment, I realized that these were anti-aircraft artillery shots! After adjusting the drone's flight, I sent it directly to the central part of the ship. At the last second, a deck appeared right in front of my gaze — so close that I could see the details. Suddenly, the screen turned into a gray static background ... Obviously, the explosion killed everyone on board. ”

Over the next month, the crews of VK-11 and VK-12 conducted another two dozen successful attacks, destroying the Japanese anti-aircraft batteries on the islands of Bougainville, Rabaul and on. New Ireland. The last combat flight of the drones took place on 26 on October 1944 of G.: three UAVs were destroyed by the enemy-occupied lighthouse on one of the Solomon Islands.

In total, 46 drones took part in the fighting in the Pacific, from which 37 were able to reach the target and only 21 made a successful attack. In principle, a good result for such a primitive and imperfect system as Interstate TDR-1.

On this combat career UAV ended. The war was drawing to a close - and the fleet management considered that there was no need to use such exotic means. They have enough brave and professional pilots.

News from the battlefields reached the army generals. Not wanting to give in to the fleet, the army ordered for itself one experimental prototype of the UAV, which received the designation XBQ-4. Tests on land showed not too optimistic results: the resolution of the camera “Block 1” was not enough to accurately identify targets in a large number of contrasting objects. Works on XBQ-4 have been curtailed.

As for the rest of the XDRUM TDR-189 drones built from 1, they safely stood in the hangar until the end of the war. The further question about the fate of unique flying machines was resolved with American pragmatism. Some of them were turned into flying targets. Another part of the drones, after appropriate measures and removal of secret equipment, was sold to civilians as a sports aircraft.

The history of tactical drone drone for a while was forgotten - before the advent of digital electronics and modern communication systems.

Delmar Fairley, a leading specialist in the creation of American drone drone during the Second World War, wrote in his memoirs: "The end of the war boldly put all the super projects in the basket of forgotten ideas." 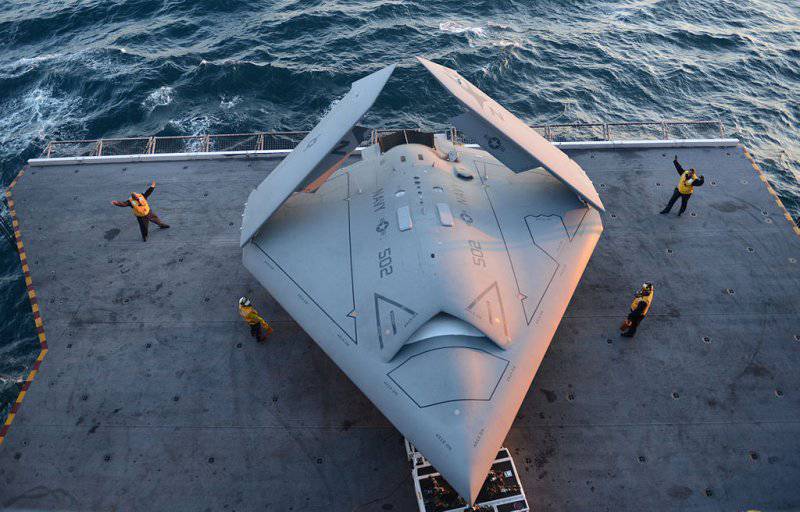