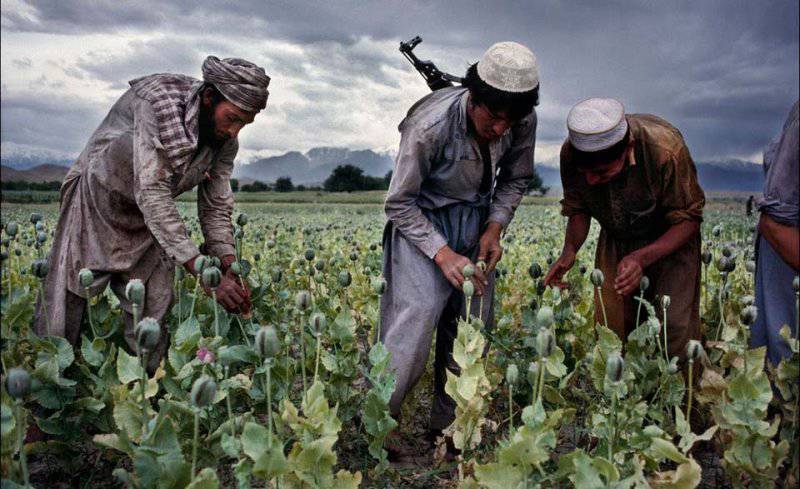 Over the past ten years, the stakes in the Afghan war have grown to an extraordinary scale. In the nineties, the confrontation in Afghanistan was a problem for the Afghans themselves, until the “peacekeepers” from NATO occupied this country. After the invasion of foreigners, the Afghan war became a headache for the entire region. In addition to the export of violence, the threat to Afghanistan’s neighbors is drug trafficking. Afghan heroin is a serious challenge for Russia too: unfortunately, drugs from Asia are being shipped to our country.

Plague of the XXI century

Today, Afghanistan has become the largest producer of opium in the world. For comparison: last year alone, hard drugs were produced on Afghan poppy plantations twice as large as in all other countries of the world combined. The main consumers of Afghan heroin are the European Union and Russia, especially its southern regions.

From 1 in January of this year, Russia, becoming the leader of the G8, immediately declared its main priority in the fight against drug production and drug trafficking. Thus, Vladimir Putin briefly described the contours of Russian foreign policy and acknowledged that drug use is the main problem of the Russian nation. And indeed: now, when the fight against alcoholism and measures aimed at improving the demographic situation, after a decade gave the first fruits, it is time to give an adequate response to another destructive challenge - drug use.

The use of the G8, apparently, can bear fruit, since the countries that are part of this organization are quite influential and can put pressure on post-war Afghanistan. They themselves would not have done this without the Russian initiative. However, Russia, skillfully playing by the Western rules, nevertheless managed to achieve its goal, and now the G8 participants will have to act in our own interests in the coming year.

It is indicative that in 2014 the withdrawal of NATO troops from Afghanistan will take place. At the same time, during the occupation, the cultivation of opium poppy has increased several times: for example, according to the UN, over the past five years, the area under planting has increased from 193 to 209 thousand hectares. In such circumstances, the involvement of the G8 in solving the opium problem is not just a service from the West. Russia is in fact “poking its nose” at the countries responsible for the growth of drug trafficking: after all, Afghanistan has been under their control for the last 13 years, and they should be responsible for the consequences of the occupation.

Money does not smell

Drug use is dangerous not only because of the degradation of the nation. Giant financial flows from Russia and Europe rush to Central Asia, into the hands of militants and drug dealers. A part of this money settles in the hands of intermediaries - the mafia, which ensures the safe transportation of opium. Thus, the fight against drug trafficking is a battle for the health of the people, a fight against Islamist terror and with ordinary organized crime that has no religious or national identity.

Billions of dollars from heroin sales are spent on purchasing weapons and search for mercenaries. It is difficult to say where the Afghan financial sledgehammer will be turned after the withdrawal of NATO troops from Afghanistan. Excess money and excessive ambitions of extremist oppositionists can be the cause of some kind of military or political adventure.

It is possible that the billions received in Russia due to the sale of drugs will come back to us - but this time in the form of sponsorship to some “ideologically correct” underground like the Islamists in Dagestan or Tatarstan. However, it depends solely on the owners of the plantations.

Today, international forces in Afghanistan are fighting the Taliban, but they are completely “forgetting” (intentionally?) About the producers and sellers of opium. Interestingly, most of the plantations are located in areas where NATO patrols appear most often. The area under crops under the occupation authorities has grown 26 times! And with the Taliban, the opposite happened: the area of ​​opium poppy plantations declined 8 times. It turns out, heroin production exceeded the level of the nineties.

If the United States and its allies really wanted to defeat the Taliban, they would certainly have struck the brunt of the opium plantations. Then it would have been possible to destroy the main source of funding for the partisans, which should have led to a decrease in the level of resistance. But, judging by the fact that the drug trade in Afghanistan is booming, the victory over the Taliban is not a priority goal of NATO. The bloc pursues some unofficial goals, practically unrelated to "democratization" and "the fight against terrorism."

The increase in drug production coincides surprisingly with the increase in the number of occupying troops. While there were few foreigners, there were practically no lands planted with opium poppy; but now, especially after the past few years, when NATO troops arrived in the country in tens of thousands, heroin production has become the basis of the Afghan economy. At the same time, most of the drugs are exported.

Since Afghanistan is the largest sponsor of terrorism and organized crime in Central Asia, and the US is doing nothing, Russia itself must deal with the opium threat. In addition to attracting the G8, which is unlikely to help us in the difficult struggle against drug trafficking, a plan for the elimination of Afghan opium plantations was developed by Russian specialists.

The plan proposed by the specialists is called “Rainbow-2” and contains several specific recommendations aimed at the destruction of the Afghan drug business.

The first point of the plan is to declare trafficking in Afghan heroin a world threat. This will help many states unite efforts and coordinate their actions. The second point is the development of the infrastructure of Afghanistan, especially the electrification of the country. Thanks to such actions, at least two million jobs must be created: for the construction work, it is not necessary to have high qualifications, so that uneducated Afghans will cope with road construction and wiring of power lines.

The third point is the actual elimination of opium crops. Theoretically, when jobs are created, Afghans will no longer need to hire laborers to process plantations. The salary on construction sites will probably be higher than the mere pennies that an ordinary worker receives - all profits go to the owners of the poppy fields, and not to those people who are engaged in the production of heroin.

The fourth point of the plan provides for the fight against these hosts, or, as the authors of the plan called them in English manners, “landlords”. It is necessary to keep cadastral registration of the lands of Afghanistan for better control over the use of farmland, and the owners of poppy plantations should be included in the UN sanctions list.

The fifth point - to oblige NATO troops to destroy opium crops - certainly will not work. There is very little time left for the withdrawal of the foreign contingent, although during all the years of the occupation the United States has done almost nothing to combat the manufacture of drugs.

The sixth point is cooperation of the Russian, Afghan, American and other intelligence services. As planned, intelligence agencies are obliged to provide each other with operational information about the location of drug labs and poppy plantations, as well as about people involved in the drug business.

Finally, the seventh point is the training of drug police Russian and Western instructors. To implement this plan is supposed to involve the Russia-NATO Council.

The Rainbow 2 plan could become the basis for the formation of a large-format international anti-drug coalition, but it was sabotaged in the West. The fight against drug trafficking is not part of the US plans; the task of Washington at the current stage is to legitimize its military bases in Afghanistan. The States are not interested in supporting Russian plans, because Afghan heroin does not enter the American market!

Well, attracting the G8 to the implementation of the Rainbow-2 plan is a worthy and legitimate answer to Western politicians. They didn’t want to work voluntarily - they will have to support Russia in the framework of a legal international organization that Moscow is heading this year.

It is not known what will happen in 2015, however, thanks to the brilliant achievement of Russian diplomacy, 2014 can be a worthy start to the international struggle against the transnational drug business.