February 24 2014
31
A few days ago in the United States began selling a new pistol called Armatix iP1. In light of the features of the US arms market, a similar news does not look anything special. However, this time the company developing a new pistol proposed a development that, allegedly, could have a significant impact on the further development of small arms. weapons and related technologies. It should be noted, the first information about the new gun appeared a few months ago. However, he went on sale just now. 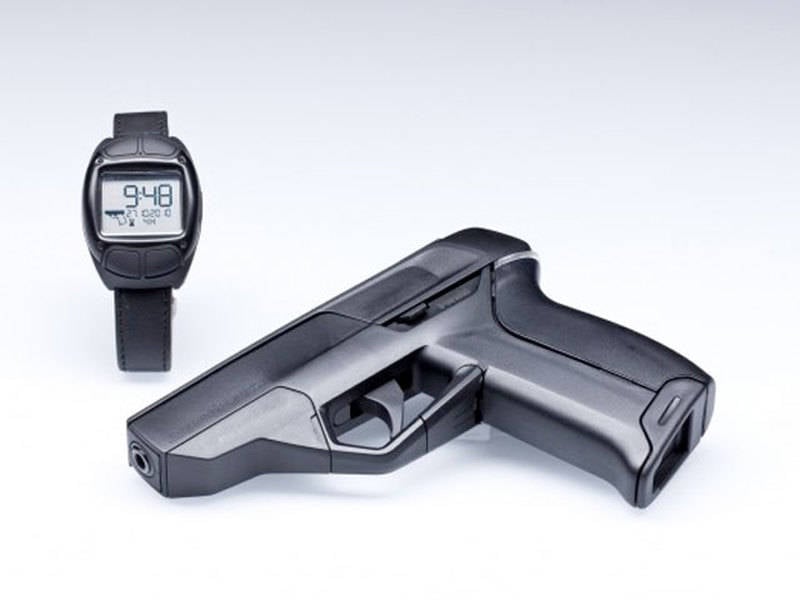 While iP1 pistol is offered only in one of the stores in California. For 1798 dollars, the buyer can purchase a set from a pistol and an iW1 electronic watch designed for it. In addition, the official website of the Armatix company offers a special version of the weapon kit, which includes an additional lock for the weapon and its control panel.

The main feature of the new development of the German company Armatix is ​​a special electronics that allows you to control the operation of the mechanisms of the gun. In the iP1 pistol itself and the iW1 watch attached to it, there is a set of chips and mechanical components that track their relative position and, if necessary, block the possibility of firing. In order for the gun to fire a shot, an iW1 watch must be in close proximity to it. The range within which the circuit breaker is removed is equal to 10 inches (about 25 cm). The electronics of the pistol and clock uses RFID technology.

The authors of the project claim that equipping the pistol with special electronics will not allow an attacker to use stolen weapons. In addition, supporters of the new weapons believe that it will be able to influence the number of crimes involving the use of firearms, suicides and armed clashes between gangsters. The new technology is compared with airbags used on cars.

The iP1 pistol (intelligente Pistole 1 - the 1 Smart Pistol) is designed for use with .22LR cartridges and is equipped with an 10 magazine for cartridges. All structural elements are mounted on a plastic frame, the use of metal parts is minimized. The total length of the gun is 168 mm, 92 of which falls on the barrel. Without ammunition, the pistol weighs about 550 g. Like other self-loading pistols, iP1 uses automatics based on the recoil of the free gate.

The number of controls of the new gun is minimized. In addition to the trigger, it only has a magazine button and a slide delay lever. There is no separate mechanical safety lock controlled by the shooter - automatic equipment is responsible for blocking the mechanisms. For ease of use, the gun is equipped with an indicator notifying the arrow on the state of the weapon. In the back of the gun, below the casing of the bolt there is a narrow transparent strip, under which are the LEDs. If the automatic safety of the gun is on and shooting is prohibited, the indicator is red. When the iW1 clock approaches for a sufficient distance, the fuse turns off and the indicator turns green. If the clock is near and the store is empty, the shooter sees a blue light. As an advantage of this indicator is called its convenience: to know the state of the weapon, the arrow just one look at the gun from the side or rear. As previously reported, the electronics of the gun uses two AAA batteries placed in the handle.

The iW1 electronic clock is equipped with a sealed case and a large LCD screen. The main purpose of the watch is to control the operation of the automatic safety of the gun. The electronic device is capable of transmitting a signal up to 15 inches (about 37 cm) and exchange information with the gun. Before using the watch and gun, the user must set a unique password used by the system to identify components. The iW1 watch has several additional features. So, their screen displays not only the time and date, but also the status of the gun. If necessary, the shooter can use the function of blocking weapons on a schedule. In this case, the gun fuse cannot be turned off for a specified period of time. 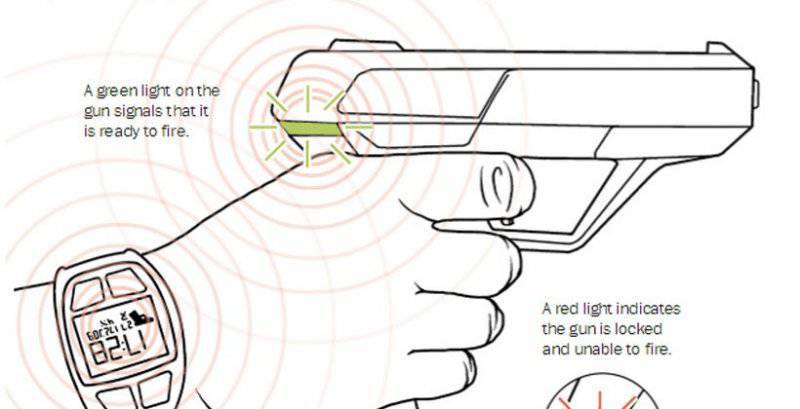 In addition to a pistol and a watch, the iP1 Limited Edition kit also includes an additional locking system for weapons designed for an 9x19 mm cartridge. The cylinder lock can be used with any suitable gun. To control this lock, a separate remote control is used. By the principle of interaction, the remote control and the lock are similar to the iP1 pistol and the iW1 watch. An additional system from the “Limited Edition” is proposed to be used when storing existing pistols of other brands. A pistol, a clock, a lock and a control panel are delivered in a case with a combination lock.

The iP1 smart pistol, like many other daring and interesting projects, has both advantages and disadvantages. The indisputable advantage of this weapon is the "binding" to the owner. During a clash with a criminal, the owner may lose his gun, but the criminal, having seized the weapon, will be deprived of the opportunity to use it. Thus, the owner of the pistol and watch gets an extra chance not to get injured or to get out of the conflict as a winner. Another advantage of the Armatix iP1 is the LED indicator, which clearly demonstrates the state of the weapon. A luminous colored stripe in the back of the gun will allow the shooter not to be distracted by checking the position of the mechanical fuse.

However, an interesting project has several serious drawbacks. The first of them, which can be seen immediately, lies in the price. A iP1 pistol without a watch costs 1399 dollars. For comparison, the cost of various modifications of the famous Glock 17 pistol does not exceed 550-600 dollars. An Austrian pistol can also be taken as an example when considering the fighting qualities of a new weapon. The iP1 pistol energy using the .22LR cartridge, depending on the bullet, does not exceed 140-150 J. At Glock 17, this parameter can reach 450 J. Thus, for almost three times more money (excluding the cost of hours), the user will receive a weapon with ambiguous characteristics.

Another drawback of the Armatix iP1 pistol and iW1 watch is related to the specifics of their use. Most shooters are right handed and have a watch on their left hand. If we take into account the distance at which the components of the new system can interact, it turns out that the shooter will be forced to hold the iP1 pistol with both hands. Otherwise, the distance between the clock and the gun will be too large, which is why the fuse will not turn off. Thus, the shooter will have to either hold the pistol with both hands, which is not always possible in case of a sudden attack, or get used to wearing a watch on the right hand. It should be noted that the American company TriggerSmart, in its similar project, solved the problem of the mutual placement of the pistol and the control element: the control panel, giving the command to turn off the fuse, was designed as a ring.

As you can see, the Armatix iP1 “smart” pistol and the clocks attached to it are of some interest, although they are not without some serious flaws. Due to the existing problems, the original system can be considered not only and not so much a means of self-defense, as the most real electronic gadget, designed for fans of various technical innovations. This perception of the project allows you to close your eyes to the existing shortcomings and not detract from its merits. How interesting for potential buyers will be the new system of "smart" weapons - time and sales will show.