"Eurohohly", or What should think about GDP 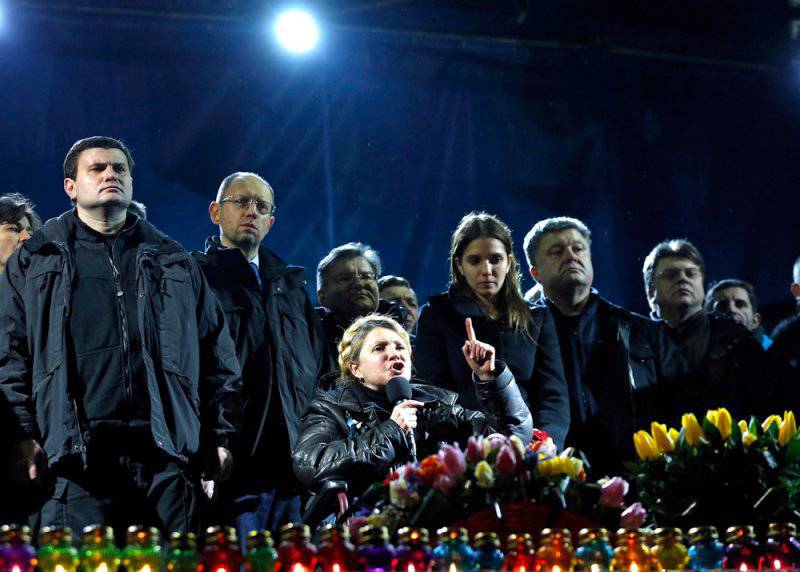 Part one
"For our and your freedom"

I would like to immediately say that this is not analytically weighted material. This is an attempt to recognize the threat. I elected President Yanukovych, and I therefore have the right to ask him before he began to act. Then he will not care, like me.

Yanukovych is offered to sign a charter with European integrators. Russia takes a step and agrees with him. The people, encouraged by the prospect of entering a better life (without corruption, kickbacks, cronyism, gangster lawlessness, arbitrariness of officials, theft of the elite, etc.) for some reason goes out and begins to protest ... peacefully, according to all the rules of a civilized society. The power spits and out of habit beats the first person on the head, which includes the mechanism of radicalization of the protest movement. Next, the “painful reflex” of the pressure and temperature of the medium starts to work by mutual fight. Some do not want, others can not, and someone starts to solve the "eternal" problem of "Muscovites and Jews". Molotov cocktail is actively used by society, intoxicating with its permissiveness. The process involves intermediaries in the person of Ukraine’s friends from Europe and the USA. The process is gaining momentum.

Outwardly, everything is just primitive. Russia gets a headache in the face of a dying brother. Europe delays a part of the territory, and perhaps the whole territory. The United States finds a tool of influence on recalcitrant Russians and two sore points for control: Ukraine and the Caucasus. And it doesn’t matter at all whether Ukraine will eventually share it or it will become part of Europe entirely. The main condition is that it should not be part of Russia as a whole (this probability already tended to zero at the moment, but perhaps the situation would change in the distant future).

If you look through the prism of the USSR, we have fifteen points of pressure on Russia, of which five are activated (Lithuania, Latvia, Estonia, Ukraine, Georgia), and also internal points, purely Russian (in the form of the Caucasus, for example). This is neither good nor bad. It just has a place to be. Such conflicts within the society have occurred in the recent past not only in Ukraine. These are England, Latvia, Georgia, the USA, and everywhere these events were given an unequivocal interpretation (illegal actions). In the situation with Ukraine, everything is exactly the opposite. As in Syria, Serbia, Iraq. There is a regime and there are people. Not the power chosen by the people, but the regime. It follows that any movement towards democracy on our part is a derivative of the surrender of the interests of the country. The only difference is how bloodless the process goes. Everyone remembers the nineties and millions of dead. They cannot be sewn to damned capitalism, whereas with bloody deaths everything is much simpler. Blame the leader of the country, which began to kill. The cynicism of the situation is that if millions died during the accumulation of capital, this is statistics, but if one was killed, for any reason, this is a tragedy.

What is bad "leader" of Ukraine? Everybody. And the fact that maneuvering between bad and very bad. And the fact that he is trying to solve an unsolvable problem from the West, in which the correct answer is everything except the solutions offered by the country's leader. And by the fact that for many years in power he did not create support among the people, ignoring the interests of some (many), condoning the “insignificant” of others (the smaller ones). By allowing the foreign arena to think that his country does not live by its own laws, and still does not fulfill the “common”.

The general trend is clear. Change the foothold of the people on a narrow circle of people, governing the state and vice versa, depending on the tasks to be solved. Managers can, and most importantly, need to change. Here you will not trample, as against the laws of physics. Against the people, too, not trample. The main thing is to correctly shift from "foot to foot", from one point of support to another, power-people-power-people. Formally rested, the president resists the law of this “trampling” and therefore always loses. The authorities and the people here are a contradiction, not a symbiosis, as in the USSR.

A set of detonators of public opinion is known. This is what was discussed at the beginning: corruption, nepotism, theft of the elite, and so on. Probably, this is where the GDP should be thought of. Because “Eurochovers” is simply a contradiction and another point of support, bypassing the “power elite”.

Personally, I deeply doubt that GDP rests on the laurels of its successes of a foreign policy nature, of internal political “consensus” - a balance of interests of different groups, shows for the people in the form of the Olympiad and the world football championship in the not too distant future. American politicians rightly say that in Ukraine they are testing the technology of the change of power in Russia. (Mr. Kissinger, if anyone is interested.) Yanukovych maneuvers between the hammer and the anvil. Lukashenko took away the hammer, resting on the anvil. Putin needs to take the anvil out from under him (avoid controversy), take the hammer off (seize the initiative) and, after the enemy snaps into the ground, twist it and cover it on top of this anvil (solve the problem).

Looking for at least two super efforts. Raise and cover. Take away is work. We are not Belarusians or Ukrainians. We are not uniform even more and scattered over one seventh of the land. There are only 140 million of us. We allow for multi-vector development. We are raising our standard of living due to population decline. We have a low speed of social, protective, non-state-initiated communication. And this low speed, oddly enough, is one of the bases for the stability of our state. We absorb blows. At this positive points end. Our president is bad not because he is bad, but because the country after him is guaranteed to be in turmoil. The mathematician Berezovsky was wrong for himself and was not mistaken for the motherland, for which he probably hung himself in the bathroom, in the most legally “fair” country in the world of England. Hope for luck a second time is stupid. Operation "Successor" will not. As the grip weakens, the country will begin to crawl into chaos. GDP is not eternal, and therefore the balance of interests, too. The hook on which Russia hung on its flight to the abyss, unbent. Slow and implacable. The people do not have a golden parachute. Therefore, there is such a fierce struggle inside for the opportunity to get it individually. Everyone understands this temporary lull precisely as a lull before the storm and tear each other’s means of salvation, which means they sink a ship that is already breathing its last. Which floats! Do not sink! And under a fur coat, rust still reveals a high-alloyed steel of ohrenitelnoy thickness. That is, the flooding of our ship "Russia" will again happen not because IT sank, but because it was drowned, having opened the Kingston in a panic or maliciously.

Events in Ukraine can be considered as torpedoing our ship. There is nothing to close this hole. As the process is gaining momentum and involving more and more new masses, there are already voices that it is time for Russians (following the example of the Ukrainians and, most importantly, fraternally, together) to resolve the issue of their criminal regimes. And it is true. This question has matured and it must be addressed. Half measures, based on the understanding that the demolition of the head of the state is not a way out of the situation, no longer solve the problems. The problem triggers a self-destruct mechanism. She does not ask if she wants this GDP or he has a different vision of the situation, she is on the drum, the guard is tired and the people are tired too. No one is interested already, whether they roll back or not, steal or not, etc. In society, when dubbing the amount of rollback in 90%, the image of silent “fucking” and understanding that this is “finita la comedy” naturally occurs, there is no place to go. We really steal and roll back the whole viaducts during the construction of roads, entire backup lines in the construction of communications, etc.

Formally, for Ukraine, the external perimeter of control simply suggests rolling the system back to some control point in the 2004 year. In reality, they simply change the power in the country because they agreed to it in this form, in 1991, after the calls of Yeltsin, Shushkevich and Kravchuk in the USA and the collapse of the USSR as a result. The period of gangster capital accumulation due to the robbery of everything and everything, including the country's budget, is over. The first step towards capitalism has worked. The second step will be deeply forced. The West is guaranteed not to make a step “back” in the USSR under the threat of the Third World War.

So, the conflict in Ukraine is a compulsion to conformity. Forcing everyone without exception, and us too, and, naturally, no one will abandon the archaization of one-sixth of the land called the “post-Soviet space” to the level of the Middle Ages, and better still lower, finally and forever.

Ctrl Enter
Noticed oshЫbku Highlight text and press. Ctrl + Enter
We are
About Stalin and KhrushchevWhat you didn't want to know about England
Military Reviewin Yandex News
Military Reviewin Google News
336 comments
Information
Dear reader, to leave comments on the publication, you must sign in.