Dnepropetrovsk is no longer a Russian city 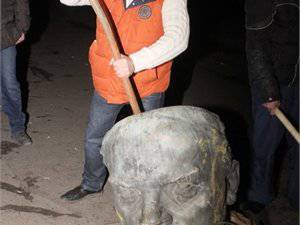 The first official millionth Russian-speaking, but Russophobic city appeared on the political map of Ukraine. That night, there were three hundred militants under the exclamations of "Glory to Ukraine", "To Heroes - Glory" a monument to V. Lenin was dropped from the pedestal. What does Lenin and Russian? Well, firstly, in Ukraine, in the eyes of the nationalist movement, Russian and Soviet are one, they are synonymous. Bolshevism came from Moscow! After 10, the years will start to smash and demolish monuments to the fallen Soviet soldiers-liberators, as in the Baltic States. Do not believe? Tell the residents of Dnepropetrovsk 10 years ago that they have a Bandera chants in the center of the city and without resistance will demolish the monument to the leader of the world proletariat! Yes, the one who gave Ukraine New Russia, who was frightened by Western Europe and introduced the 8-hour working day in order to avoid a revolution. In Ukraine, there is a collapse of the “Russian world”. Unfortunately, the tutorial stories Ukraine and consumerism won. Let the Russians do not indulge themselves, in Ukraine there is not only the overthrow of Yanukovych, but also the national revolution.


What do I demand from official Russia, Russians and Russian business? I appeal to the Russians in Russia and the peoples of Russia who have gone through crazy liberal 1990 and, in general, have preserved the traditions and memory of 9 May, February 23 and March 8. You stood before the onslaught. Only Russian-speaking consumers rewrote the cultural and historical code. But in general, Russia survived. So, Russia and its people should recognize such a bitter fact as the appearance of Russian-speaking Russophobes. This is by no means a marginal phenomenon. This is the result of the melting pot policy, it is the result of the education policy and the media. If you want, then this is a soft power that you have not thought of even in the Baltic States. In Central Ukraine and even in south-eastern Ukraine there is an abundant Russian-speaking social group that unites both ethnic Russians and Ukrainians who are aggressive to Russia and the history of the USSR and even the Russian empire. Many of them seriously believe that Moscow Russified their ancestors. But at the same time they are frankly fake and show adaptability. They listen to Russian music, watch movies, they talk in Russian 24 hours a day, but at the same time they spit saliva on Russia, for any of its historical periods. And it's not in Putin. They even deny some moments in the Great Patriotic War. For those who think that I am a provocateur, I recommend reading about the following publications: “Manifesto to the Russians in Ukraine (updated)”, “In Ukraine there is not a single Russian person younger than 30 years. Only facts ”,“ South-east of Ukraine, which we lost ”.

What policy should Russia and its people show on all fronts to the Russian-speaking Ukrainians who have not resisted in establishing Bandera ideology? First of all, it is necessary to clarify one truth: among the 45% of Russian-speakers in Ukraine, there are no more true Russian than 5%. They are active, but they are in the minority and in the information boycott. I offer a factual and pinpoint policy. There is a fact that in a million Russian-speaking city a monument to Lenin, a collector of Ukrainian lands and the builder of communism, was piled up. This is the first brick in the denial of the history of the USSR (great Russia and Russian peoples) with its achievements. Therefore, I urge the official Russia, the opposition, the patriotic movements of the Russian Federation to act adequately to the Russian-speaking Russophobes and traitors of Russianness.

1. Entrepreneurs from Russia in negotiations with businessmen from Dnepropetrovsk must require a translator. Even if your Ukrainian partners communicate well in Russian, ask for a translator. They should feel your contempt. Deprive them of the economic advantage that knowledge of the language gives. Let them be consistent "patriots". Let them go to the Ukrainian language, which over the years 20 they have not learned normally, but have learned to bark and blame Russia for their troubles. You can even use English. Yes, they will tell you that this is nonsense and a circus. And you might think so, but it needs to be done. That they understood - traitors do not forgive. I understand how hard it is for Russians to read. But believe me, in the resort town of Berdyansk, where I lived 25 for years, people with the name Andrei and the last name Ivanov openly take money from Russian tourists, but they spit on Russia. Do not believe? Type in the search engine "Berdyansk sheets. News readers, ”and you will see how they love Russia there. And this is in a city where 95% communicate in Russian.

2. Boycott production those Russian-speaking industrial cities where crimes are committed against Russian and Soviet culture and there is absolutely no resistance. Dnepropetrovsk - the first. Blood from the nose, but Russia must abandon the production of Yuzhmash. Russian-speaking fans and fans of the Galician culture do not deserve the right to collect space rockets. If they like the ideology of farms and regional centers of western Ukraine, they need to ensure this right.

Please note that in my article I don’t say a word about Ukrainian-speaking cities and people. For I am not a Ukrainophobe, I predateletobe. Well done, they won, took Kiev. They were going to win 23 of the year. I studied at school in 90-x, and before my eyes every version of the textbook on the history of Ukraine (by the way, especially the Russian-speaking one) became more radical than the previous one. In 90, we were fed with a fairy tale that there were “good” and “bad” Bandera. Where some fought against the Soviets and against the Germans. Condemned in the textbooks SS division "Galicia". Today - all the characters. And the Soviets are invaders! Why did not resist? Guys, very gently laid, believe me. They could not evict us, as in the Baltics, from apartments, and deny citizenship, because we had a lot. Therefore, they fought for the minds. Now there will be critics who will write to me that the Ukrainian people are fighting only against the hated (by the way, me too) Yanukovych, but I don’t think so. For fair slogans "Down with Yanukovych" see an attempt to build a mono-ethnic Russophobic state. Constructive critics and patriots of Russia will write to me that we need to save the Russians and our ideology. Late guys, late. Who does not believe, read my article "Supporters of the SS division" Galicia "are crossing the Dnieper." I wrote it in the summer. For the first time in the Russian-speaking Krivoy Rog in broad daylight, they marched along the main streets in honor of this division! For more than a year I wrote articles about the disappearance of the Russian ethnos in Ukraine, while the language itself does not disappear. Do you know who else sounded the bells? Almost nobody! I found two publications on this topic on the Internet. One of them was written by a former resident of Sevastopol (the article was called “Russian Ukrainians missed a chance without imposing their summons on Yanukovych during the Maidan”). The second article was written by the Russian-language Russophobe, it is called: “Russians in Ukraine: we are already different.” I recommend to read. The first, like me, has a soul that hurts for the Russian people, and another author is happy that they are far from the dark Russian people in Russia. And that's all. No one else is interested in this problem. Everyone traditionally sees the Bandera West of Ukraine and the supposedly monolithic pro-Russian East.

You ask me: is it all over? Not. Today, three regions and autonomy can be saved from the de-Russification of consciousness: the Crimea, Lugansk, Donetsk and Kharkov. Do not waste force on Odessa, Zaporozhye, Nikolaev, Kherson. We lost them by 55%. Difficult decisions. But we are talking about the preservation of the largest Russian ethnic group outside of big Russia.

Ctrl Enter
Noticed oshЫbku Highlight text and press. Ctrl + Enter
We are
List of destroyed the largest and most high-tech enterprisesRussian revolution: the debunking of myths and nontrivial view
Military Reviewin Yandex News
Military Reviewin Google News
444 comments
Information
Dear reader, to leave comments on the publication, you must sign in.