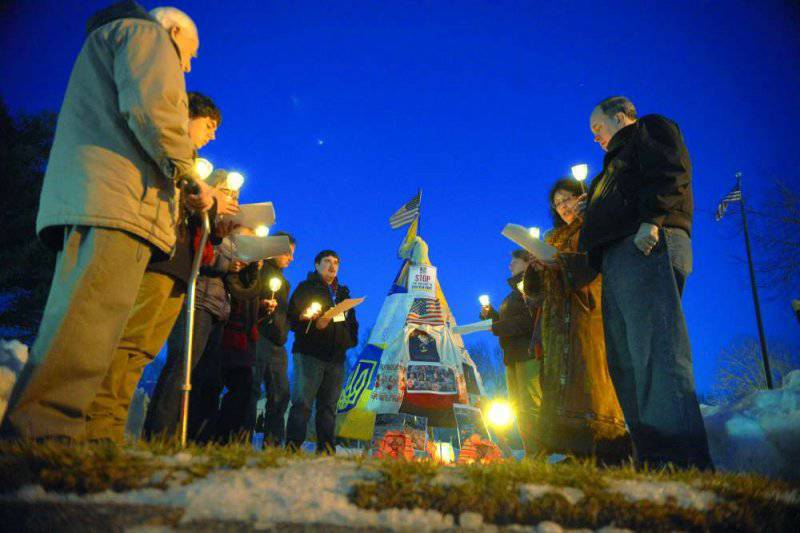 As of the early morning of February 22, I no longer quite understand who is the real power in Kiev. Yesterday and. about. Minister of Internal Affairs Zakharchenko was dismissed. All the security forces left the city center, throwing water cannons. Late in the evening there was information that the militants had taken under protection (from whom?) The buildings of the presidential administration, the cabinet, and the parliament. Already at night in some comments on news information flashed through the tapes that allegedly the board number 1 with the president had already left Kiev. The checkpoints of militants in the capital are growing by leaps and bounds. Armed thugs stop people, check documents, search vehicles. The impression is that the state has simply withdrawn itself.

It all happened so quickly that few people had time to understand something. Yesterday morning there were negotiations, after lunch it seemed that a compromise was finally found - there would be early elections. But by the evening it became clear that the militants live their lives, and the three crazy oppositional leaders do not concern them at all. A young man of unknown origin from the Maidan podium shouted that Yanukovich has time before February 10 on 22 to resign, otherwise “we will go on the offensive with weapons».

I think many of the “Russian-speaking” citizens tolerant of the Maidan, who thought that there was a fair struggle between the common people and the gang in power, will now begin to see clearly and understand what kind of power is replacing the current one. But I had to think before. And now - who is able to oppose? Militants are well prepared, organized, armed. They are outspoken nationalist extremists, they do not hide it. This movement is completely anti-Russian in its spirit and form. Its point is directed not only against hated Moscow, but also against any native Russian language and culture here in Ukraine. All residents of the south and east, and in general all those who speak Russian, they consider, at best, some kind of converted Ukrainians, who once spoke everything in Move, but then the evil Muscovites came and melted them forcibly into themselves. And at worst - they are considered just Muscovites, and that's all. They do not care at all that most of the country's population is at least neutral towards Russia. And at least a third of the country would prefer that their lands simply become part of Russia. However, the nationalists do not care that Kiev as a whole is a Russian-speaking city - even now, after 25 years of unscrupulous Ukrainization. They are all “unchilted”! They are going to build a new Ukraine - for the "Ukrainian nation".

I have the impression that the events taking place now are even useful in something. Masks are dropped, and the truth comes out. If earlier, since the safe times of the Union, we somehow could not wake up, we simply lived not in the Ukrainian SSR, but “in” Ukraine, as time went on, gave us a hymn, a flag, a hryvnia ... Well, to hell with it, life goes on, what difference ! .. But today, every citizen of Ukraine is faced with a choice: either you are Russian or you are Ukrainian. If you do not know Mova, you can not be a priori Ukrainian. If you go to the “Moscow Church” (that is, to the church of the Moscow Patriarchate), you are a Moskal and a traitor. The times of the "Russian-speaking Ukrainians" are over. If your native language is Russian, then call yourself Russian, do not be fooled by reality. Whoever has not yet understood this, will understand later, when, God forbid, shooting will go at full speed across the country. Then language and religion will be the only way to distinguish one's own from others! This is the worst thing you can imagine, but it is. The real national-religious conflict is kindled. And Yanukovych with the gang had nothing to do with it, as he had with him initially. Whoever has not yet understood this, is simply a narrow-minded person.

The dope of the project "Ukraine" is passing, its true face is shown. But who will now save the Russian land from this terrible face?

Ctrl Enter
Noticed oshЫbku Highlight text and press. Ctrl + Enter
We are
A great interview with Sergey Lavrov: about Ukraine, Obama and IranWhat you didn't want to know about England
Military Reviewin Yandex News
Military Reviewin Google News
225 comments
Information
Dear reader, to leave comments on the publication, you must sign in.