Radicals refuse to leave the Maidan and demand state awards 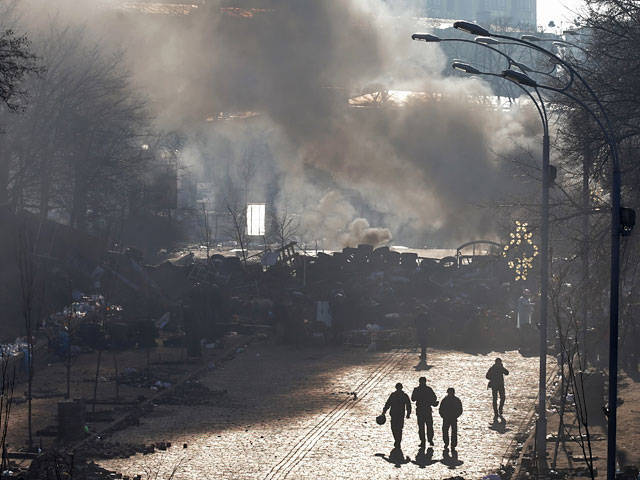 Late on Friday evening, the worst fears were confirmed: despite the agreements and the huge concessions made by the Ukrainian authorities, the radicals in the center of Kiev refuse to lay down weapon, reports TV channel "Russia 24". Ukrainian media write that the crowd on the Maidan booed opposition leaders Arseniy Yatsenyuk and Vitali Klitschko, who tried to explain the terms of the agreement reached from the stage.
It is reported that some extremist leaders promise on Saturday to storm the presidential administration building if their demands are not met, namely: the immediate resignation of Viktor Yanukovych and the arrest of those who gave orders to law enforcement officials who tried to maintain order by legal means. Ukrainian media also reported that several thousand people had gathered on the Maidan, and that the radicals had driven a car with a water cannon there, which had previously been beaten off from the Berkut.
Also, representatives of the radical wing of Maidan, the Right Sector movement, demand state awards for “rebel heroes” who “shed their blood on the altar of Victory” and to whom “the revolution owes its advancement”. "We, the Ukrainian revolutionaries united in the Right Sector, demand from the parliamentarians who have resumed their work to assign the title" Hero of Ukraine "to all revolutionaries who killed 22.01-20.02.2014 and give the families of those killed a life pension", the message of the political council of the movement, reports "Interfax".
Ctrl Enter
Noticed oshЫbku Highlight text and press. Ctrl + Enter
We are
Reports from the militia of New Russia for 27-28 September 2014 of the year
Military Reviewin Yandex News
Military Reviewin Google News
135 comments
Information
Dear reader, to leave comments on the publication, you must sign in.